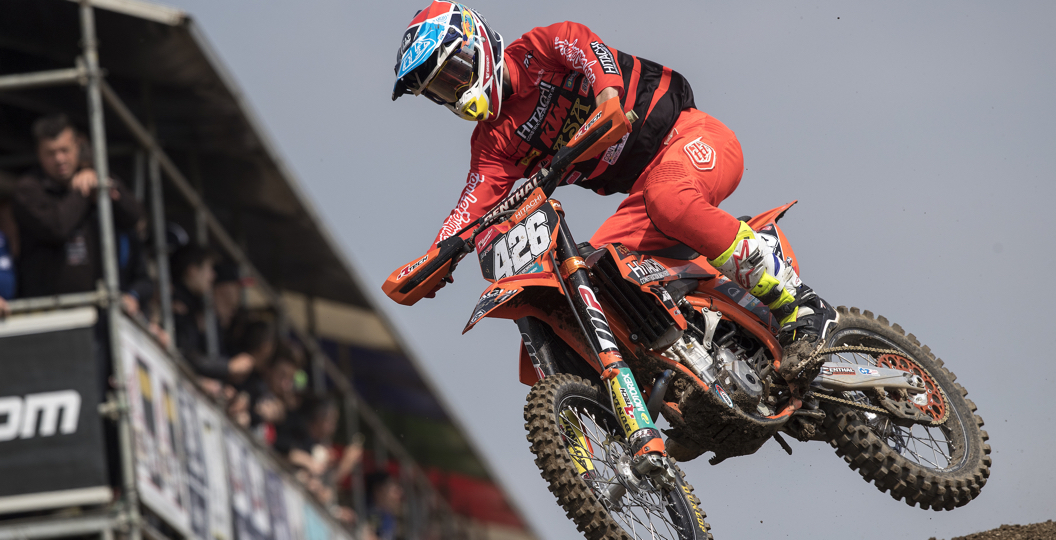 The ninth round of the FIM Motocross World Championship, the Grand Prix of Great Britain, is upon us and it is going to be another intriguing event. There is the potential for things to shake up in the respective title chases this weekend, as a couple of high-profile riders will return to racing for the first time in a while. The two days are going to be stacked with action.

Can Antonio Cairoli beat Jeffrey Herlings and steal some points away? This question is actually becoming more irrelevant with each week that passes, as if they do finish first and second in that order in both motos then the gap would only shrink by six points. Seeing as Herlings is sat on a forty-eight-point advantage currently, a swing in points like that would not be enough to make a big difference. Now, with Herlings in such a commanding position, the question would be whether or not he is going to be struck by some kind of issue and give up a significant amount of points. If he crashes a couple of times and finishes eighth, for instance, then that would be enough to shake things up a little. It is just so unlikely though.

Rather than those guys, most eyes will be on those who are returning to action at the Grand Prix of Great Britain. Valentin Guillod will be in the premier class, for instance, along with Shaun Simpson and Graeme Irwin. It is actually surprising that Guillod is going to be back so soon, as he broke his leg at the end of January and only started riding four weeks ago. Will he come out and set the world on fire immediately? No, not at all, but it will be interesting to see where he fits in and if he has a spark that was missing on the Honda. Perhaps this will take some of the pressure off of Kevin Strijbos too and help him breakthrough?

Although those returning in the premier division may struggle to make an immediate impact on the field, those who will be back in the MX2 class could make a splash. Darian Sanayei and Hunter Lawrence will be on track and eager for redemption. Although both riders have been on the sidelines since the Grand Prix of Trentino, with the exception of the brief outing that Hunter Lawrence had at Kegums, they have been back on their respective steeds for a while now. Remember the Motocross of Nations? Lawrence excelled, challenged the established in the premier division and took the individual victory in his class. Considering that he was raring to go at the last round, but was told that he could not ride, he should be fired up.

Additionally, do not forget just how good Darian Sanayei was before he tore his ACL. Sanayei could have won at the Grand Prix of La Comunitat Valenciana, as he was undoubtedly the fastest guy, and will desperately want to jump up onto the box before he goes under the knife. It sounds like the knee injury is not going to hinder him too much when the gates drop on Sunday, but he will require surgery at some point. Time is ticking and, hey, seeing as he is free to shop around, some impressive rides at the next couple of rounds would certainly not hurt his cause for next year. This could add an interesting twist to the title chase too, because these guys can steal points from the contenders.

There will be a lot of eyes on Ben Watson this weekend. Watson, who is working through the first year of his Kemea Yamaha deal, will be more than capable of landing on the box. Could he win? It certainly cannot be ruled out heading into the race, as he was four seconds down on the winner in the first moto at the previous round. It would not take much to overhaul that. It is interesting to consider that this is only the second time that he has raced at this event, as there was not a race last year and he was injured before that. A sixteenth is the best that he has done in an MX2 moto at the Grand Prix of Great Britain.

Ben Watson has all of the momentum currently, whereas Max Anstie and Conrad Mewse will be hoping to establish some of that. It seems that good starts would help both guys turn things around, as both classes are so stacked that it is just impossible to pull through from the back. It is well known what both guys have done at Matterley Basin in recent years so it is likely that their respective campaigns will straighten out on Sunday. British fans certainly have a lot to keep an eye on this weekend! Tommy Searle will be hoping to move forward too, although he has only got one round of the FIM Motocross World Championship under his belt since that collarbone injury.

There is so much to look forward to at the Grand Prix of Great Britain, as mentioned at the beginning of this feature, so this list could go on and on. Shaun Simpson will be back, along with Graeme Irwin and Adam Sterry, Romain Febvre is attempting to put his bike on the podium for the first time this year and a handful of guys have switched teams. Heck, Jeffrey Herlings could stand on the box for the one hundredth time as well! An exciting weekend lies ahead.