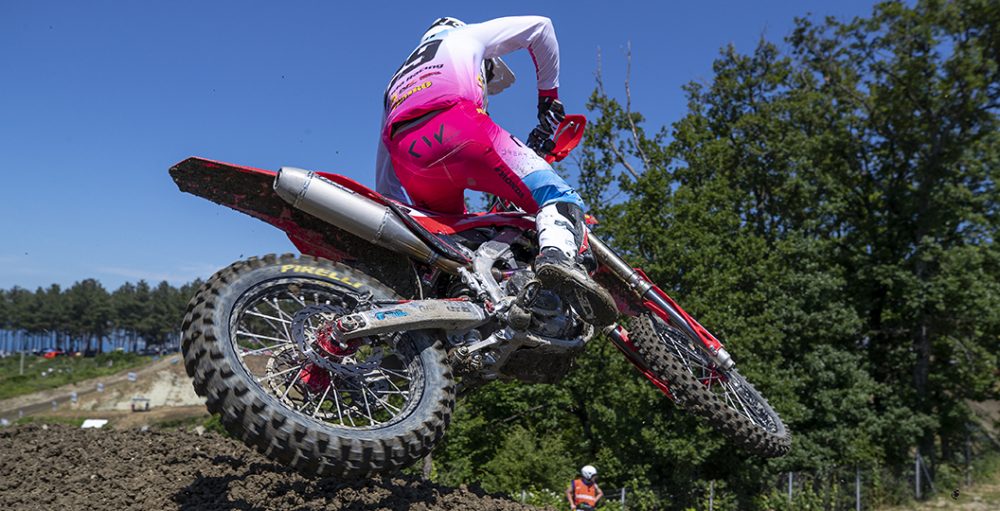 The 2021 FIM Motocross World Championship is underway, which means that another fantasy season has begun too. The first round of MX Manager went off without a hitch at the Grand Prix of Russia, so attention has now turned to the second outing in Great Britain this weekend. The rider prices have been changed, as has been the norm in recent years. Players cannot choose the riders that they had in Russia now for Britain though! That is the big thing to consider.

The riders who you picked in Russia are not an option for the Grand Prix of Great Britain, which means that it is necessary to work a little harder to find bargains and the guys who will make a difference for your team this weekend. Fantasy can be tough, so here is a little guide to Matterley Basin that could make your life a bit easier. These four riders have been highlighted as the hot picks! Remember to share your team over on social media (@motocrossvice on Twitter).

Conrad Mewse (3.4M): The cost of Conrad Mewse has shrunk considerably, seeing as he did not even race at the Grand Prix of Russia. The reason for his lack of track time at the season opener was a crippling illness that hounded him for more than a week, but that has firmly in the rear-view mirror now. Mewse appeared to be back to his very best at the most recent stop of the ACU British Championship last weekend – he was up to three seconds a lap faster than fellow Grand Prix rider Wilson Todd. That must mean something!

Mewse is an enigma though – it is never quite clear how he is going to perform on race day. There is always potential there, which is an enticing feature when playing fantasy. Mewse would occupy slightly more than a quarter of your budget. That is quite a chunk, admittedly, but two top-ten finishes would be a nice return. How much of an unknown quantity is he? Mewse charged to fourth in race one at Matterley Basin last year with the second-fastest lap, but he started thirtieth in moto two and could only get seventeenth.

Ben Watson (2.8M): The Grand Prix of Russia was not kind to the British guys, hence why there are bargains to be had with those heading into their home race. Ben Watson scored one point in Russia, which was not what anyone was expecting. Will that happen again? Absolutely not. Expect Watson to be in the top twelve in both motos at the very least. Even a 12-12 scorecard would be a nice return on the cash invested in him, so why stay away? It is almost certain his price will go up for Maggiora too.

What would his ceiling be in the premier class at Matterley Basin? Well, he never stood on the MX2 podium at the British Grand Prix and the sand is obviously where he is the strongest. Still, despite that, finishing up between fifth and eighth seems rather realistic. If he manages that and you do not have him on your squad then, well, that will suck. Do not miss out on such a golden opportunity! Just imagine how fired up he must be after Orlyonok.

Henry Jacobi (1.2M): There is absolutely no way that anyone should overlook Henry Jacobi as a pick for the Grand Prix of Great Britain. Why so? It is simply absurd that a guy of his calibre is available at a price as low as this. It is unlikely to happen again in the 2021 FIM Motocross World Championship! This price cut comes on the back of a double DNF in Russia – his chain derailed in the first moto and then he crashed out of moto two. It was a disaster.

Now, the chain derailing was a complete freak issue. There is no reason to think that something like that is going to happen again on Sunday, so eliminate those concerns from your mind. The crashes in Russia were self-inflicted though – it is just a question of whether he can stay on two wheels. It is guaranteed that Jacobi is going to score points at the very least though, which is really all anyone can ask for at this price. Just look at those in the same price bracket!

Harri Kullas (1.8M): Now that the Grand Prix is entering traditional events, capable wildcards are now going to enter the fold. Harri Kullas could be a phenomenal signing at this price. Kullas should be a name that the casual Grand Prix fans recognise, even though he has not been a regular in the series for a while now. Kullas is racing for Cab Screens Crescent Yamaha in Britain and is the man on form currently, despite a deep field that consists of guys like Tommy Searle and Dylan Walsh.

All the data suggests that Kullas is going very fast. Simple! The difficult thing is that there is no real way to use that to decipher where he would fit into the MXGP division. Adam Sterry would be the yardstick. Kullas has been beating Sterry consistently in Britain, yet Sterry was thirteenth in a moto in Russia. It is reasonable to expect Kullas to appear around the top fifteen, with that in mind, which is great at his price. Points would be guaranteed with this pick.

My Team: It is early, and this is likely to change with so many incredible picks in both MXGP and MX2. My team consists of Ben Watson, Glenn Coldenhoff, Henry Jacobi and Petar Petrov at the time of writing. It is an all-450F team that consists of guys who are coming off terrible days in Russia (except for Petrov who did not even race at round one). I just feel like I have to choose those riders, because I can and their prices are only going to go up from here.