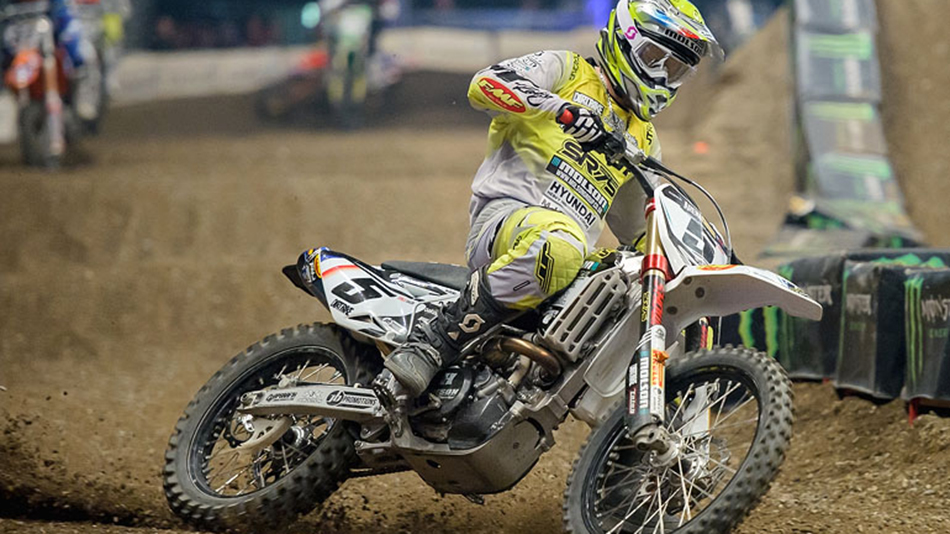 The 2014 Garmin Arenacross tour came to a close on Saturday night, following two months of fast and furious action. Of course, the series went out with a bang, as we were privy to some great racing again at the Wembley Arena. I am sure that you would like to know who enjoyed success and who struggled, right? Well, we take a look at a few of those riders in this weekly feature.

Thomas Ramette: Obviously, Thomas Ramette was the strongest rider in London; he was pretty much unstoppable all-day long, to be honest. In both of his heat races, he managed to take control of the race early on, and he never looked back from there. Finally, in the main event he grabbed the holeshot, which really marked the end of the race for the win. Strangely, the Frenchman was not a factor in the race for the lead last time out in Sheffield, so something clearly clicked for him at the Wembley Arena.

I believe that the track suited him more, as it had a hard-pack base, which has always been a surface that French riders excel on, and he had more time to adjust, after joining the series late. It was a great way for Buildbase Honda to end the tour, also, as they have had a rough go of it for the most part.

Cyrille Coulon: Honestly, I am really quite surprised that Cyrille Coulon did not win a single main event during the Garmin Arenacross tour. Cyrille was certainly more than capable, as he put himself in the mix more often than not, and showcased the talent required to stand atop the podium. But, for whatever reason, he never got the job done. In London, Coulon ended up second, and actually made a run at Ramette, but he came up just short. It was another great ride for him, but I am sure he wishes that he could have won at least one round.

Marcus Phelps: I would actually like to dedicate this part of the column to the top three in the Big Wheel 85 main event, as their battle for the win was undoubtedly the race of the night. Of course, Marcus ended up stood on top of the podium, as he eventually prevailed, and he claimed the championship too! Overall, Phelps won four of the seven main events, so he was certainly a deserving winner. However, you have to feel for Aaron Booker (the rider that won the other three mains), as he came up just short at the final hurdle.

Tyler Villopoto: When Tyler Villopoto was running second in the first professional heat at the Wembley Arena, I presumed that he would definitely make the main event. However, the American found himself watching from the sidelines again, as he just missed out. Tyler would have transferred directly from the heats, but he lost out on a tiebreak. Things then went from bad to worse in the LCQ, as he got taken out by Todd Kellett and failed to finish. Overall, it was a pretty disastrous campaign for him, as he failed to live up to expectations.

Chris Bayliss: Chris Bayliss has had a successful winter racing abroad and in the UK, as he has enjoyed a good amount of success. Bayliss even made the main event at the Sheffield round of the Garmin Arenacross tour, so he certainly has the speed required. So, when he holeshot the second heat race in London, I was quite surprised to see him go backwards so quickly. In the end, he missed a great opportunity to make the main, as he then struggled in the LCQ and failed to make the cut.

The Track: Now, don’t get me wrong, the track was not bad; I just wanted to talk about how the soil broke down, which could not be helped. When I first walked into the arena, the track looked like it would remain hard-pack and slick. However, after two races it was very loose in the corners. It was nowhere near as bad as some of the other rounds, but I was still surprised by how quickly it changed. It certainly made it difficult for the guys; it may have seemed like there was a lot of traction, but it was still quite slick underneath.