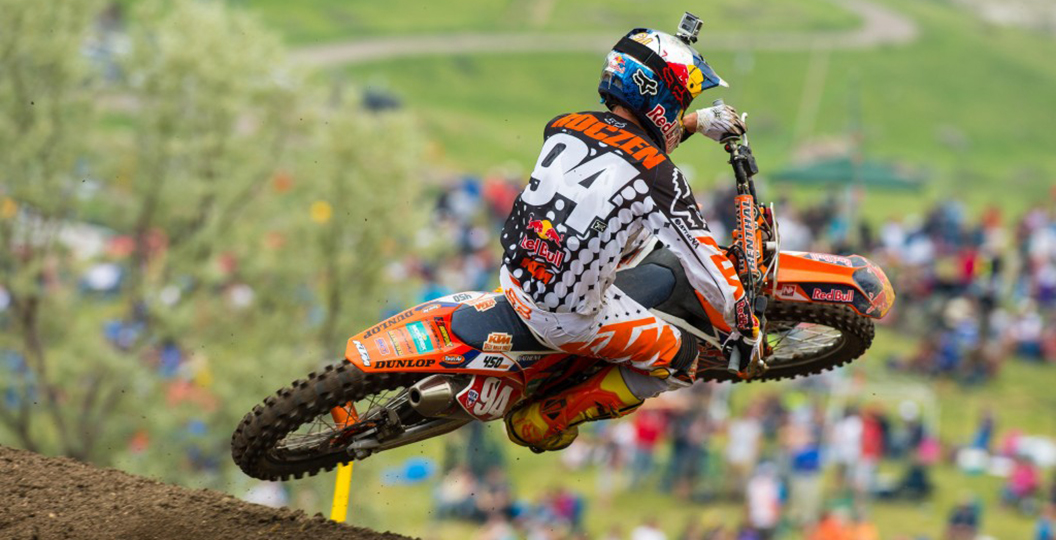 Well, the 2014 Lucas Oil Pro Motocross series has been breathtaking thus far! We have seen multiple last lap battles, and some surprising results. Fortunately, Thunder Valley was no different; however, it was not good for everyone. We look at how a few riders performed in ‘Hot and Cold’.

Ken Roczen: Honestly, I didn’t expect Ken Roczen to be this good. Right now, he is undoubtedly the strongest rider in the 450MX field. Heck, he could have won every race that has been run so far this year; he keeps putting himself in a position to succeed, which is obviously paying dividends. In the two motos this past weekend, Roczen started behind a lot of the main protagonists. However, he got around them with ease, thanks to some creative line choices and his great fitness. If he does not fade as the season progresses, he is going to be extremely tough to beat!

James Stewart: It hasn’t been an easy start for James Stewart, admittedly, although he did show a couple of flashes of brilliance this past weekend. When he was out front in race one, I presumed that he would get swallowed up by the guys behind him; he appeared to be holding them up. However, he adapted to the pace and held on, despite the pressure that Ken was applying towards the end. The second moto indicated that bike set-up was an ongoing issue, as he simply did not have the speed required to fight for the win. James did mention that the team went in the wrong direction before race two though, so he would have learnt from that.

Blake Baggett: Blake showed some glimpses of his former self whilst on his way to the overall win this past weekend. The victory will have given him some much needed momentum, and lifted the spirits beneath the awning – they must have been feeling pretty low following rounds one and two! The field is very strong this year, so good starts are a necessity. Therefore it’s important that Baggett gets out of the gate. Starts are still a problem for him, so he has to fix that before he can make a run at the championship.

Jeremy Martin: The five race win streak that Jeremy Martin was on may have ended, but he still had a good finish at the third Lucas Oil Pro Motocross round. A title is won on your bad days, and the fact that Martin rebounded from a crash to salvage a third overall at Thunder Valley was pretty impressive. In the first five motos he had it pretty easy, so we did not actually know how he was going to fare when the cards were stacked against him. However, he didn’t appear to be flustered; it is going to be very tough to beat him, evidently.

Josh Grant: In comparison to his first moto win at Glen Helen, a fifth and a sixth may seem lacklustre for Josh Grant. However, Josh was very sick going in, and actually elected to miss the second practice session all together. So, the fact that he was so consistent was somewhat surprising. It was not too shocking to see him up front, as he often thrives at Thunder Valley, so this undoubtedly helped him get through the day.

Cooper Webb: For the first time, both Martin and Webb faltered at Thunder Valley. Unfortunately, the day was much worse for Cooper, as he ended up down in eighth overall. I actually thought that he may have a shot at taking the win, as he was strong there last year. However, a fall in moto one left him in ninth, and then he struggled to push forward through the field in the second 250MX encounter. Obviously, it just was not his day – he will be back to best next week, I am sure.

Christophe Pourcel: I’ve got to put Christophe Pourcel in this column, because of his first moto ride. Most people think that he is going to be a title contender, and I am sure that he expects that from himself. But, if he continues to perform like he did in race one, there is no way he will be in the mix by the end of the year. The Frenchman was actually in a position to get a solid result, following a good start, but he just looked uninterested as rider after rider disposed of him. Maybe his bike wasn’t set-up right? Sure, that may have been an issue, but a rider as talented as Christophe can overcome that to finish in the top ten. At least he salvaged something with a third in moto two – he continues to be an enigma!

Ivan Tedesco: Admittedly, I do not expect too much from Ivan Tedesco. But, he has been very good at Thunder Valley in the past, so there was a chance that he may have a much better day. However, unfortunately, he only salvaged sixteenth overall. He actually had a strong eleventh in moto one, which was impressive. But, an issue in moto two cost him a shot at scoring any points. Rumours suggest this may be his last season racing full-time, as he could end up as a test rider on the RCH squad next year.