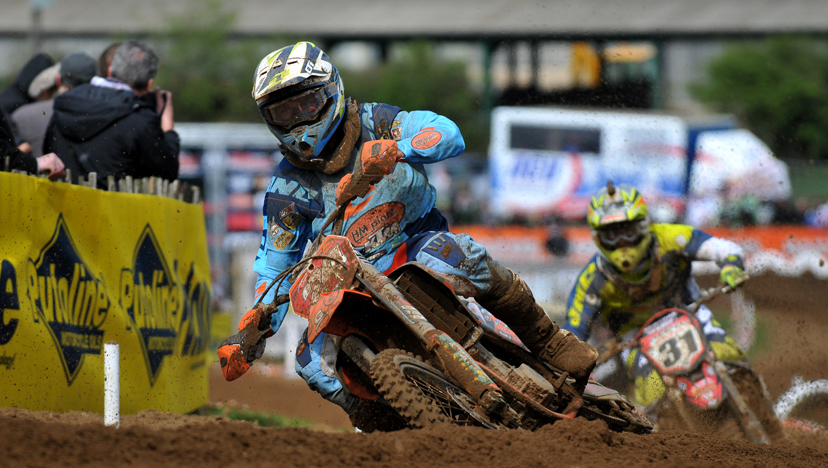 At the second round of the 2014 Maxxis British Championship this past weekend, the riders had to contend with a rough track that was tough to pass on, too. In this weekly feature, we look at the guys that thrived in these conditions, and those that struggled at Lyng.

Matiss Karro: In many ways, Lyng was similar to Landrake, as Matiss Karro again won two motos, but failed to win the overall. However, despite this, I have elected to put the Latvian in this column, rather than Mel Pocock (the series leader). Currently, I find myself wondering who is in a better spot right now, Karro or Pocock. I asked Matiss about this post-race, and he believes that he is in the best position, and I would have to agree.

Although there is a small points gap between the two, you have to think that Pocock is trying to figure out what he needs to do to match Matiss’ speed this year; the Latvian is seemingly superior. The Wilvo Forkrent KTM rider knows that if he can keep it upright, he will more than likely win the race, which is valuable moving forward. The results do not always tell the full story!

Shaun Simpson: Although Shaun Simpson has won every round of the 2014 Maxxis British Championship thus far (and deservedly so), the championship is actually a lot closer than you would think, as Jake Nicholls seems to be just as quick as Shaun. It is odd that in the MXGP series, Simpson is seemingly on another level to Jake (although that may all change this weekend), but when they return to the UK, they are much more evenly matched. Anyway, I digress.

One of Shaun’s greatest strengths is that he puts himself in a position to succeed each time, in my opinion. At this point, we have not seen him have to battle through the field, or tackle adversity, which is exactly what he needs, obviously. It is early still, but this has been a very strong start to his title campaign.

Jake Nicholls: If we are being honest, Jake Nicholls should have, and could have, won the overall at Lyng. However, a mechanical issue that was out of his control (a chain malfunction, where it kept bouncing off of the sprocket) cost him the win in the first race. Jake actually had to contend with this issue in the closing stages of moto two as well, but, he managed to get the win, fortunately. Nicholls could have won the overall, still, if he had moved forward quicker in the third and final encounter; it just seemed like it took him a little longer to get going, but once he did, he was moving forward quite quickly.

Adam Sterry: Honestly, prior to the first MX2 race, I do not think that anyone had Adam Sterry down as a potential race winner. However, he seemingly had the speed required to achieve the feat, as his times in qualifying were strong. When he got out front in that first moto, it was immediately obvious that he was not going to give up the win without a fight.

However, it remained to be seen how he would handle the pressure. But, he thrived in the situation, as looked calm and collected up front; he didn’t falter! Even when Mel was all over him, he stretched out more of a gap. It was an impressive performance from him – I would be willing to bet that he will go on to win a couple more motos this year, after that ride.

Kristian Whatley: Unfortunately, Kristian Whatley lost a lot of points in the title chase at Lyng. Of course, it’s not over, and in the grand scheme of things, Lyng was not disastrous. However, it is not ideal, obviously. Whatley just didn’t seem to have the same intensity on Sunday, which may have been because of the track conditions (in my opinion, the reigning champ is stronger on hard-pack). The fact that the track was very tough to pass on did not help, too, as it made it difficult for him to move forward following some mediocre starts. Currently, he is thirty-one points down on Shaun Simpson.

Shane Carless: I almost did not put Shane in this column this week, because he certainly made a step forward at Lyng. However, it was still a lacklustre showing – he started in the top ten, and failed to stay there. Once again, Shane struggled in qualifying, which is bizarre, as it has been a huge issue for him this year. Although a jarred knee in moto one hampered him, he was at least in the running in the other two motos, which is positive, moving forward.

Steven Lenoir: Steven Lenoir has been very impressive this year, as he has seemingly stepped it up; he would have been a contender for race wins each week. However, unfortunately, Steven fell in practice this week, and ripped his arm open. The likeable Frenchman had surgery yesterday, and it all went well – the wound was cleaned and closed. At this stage, it is unknown how long he will be out for, but he will probably be on the sidelines for a few weeks. Get well soon, Steven, from all of us at MX Vice!

Jason Dougan: Following a strong ride at round one, things have gone downhill for Jason Dougan, in recent weeks. The fall that he had in turn one at Culham set him back a bit, obviously, and he may have been a little sore still at Lyng. Despite this, I still expected a little more from him this past weekend. Jason was quite invisible out there all day, as he struggled to push forward following some lacklustre starts, which was an issue for most guys. I am sure that there are better days ahead for him.