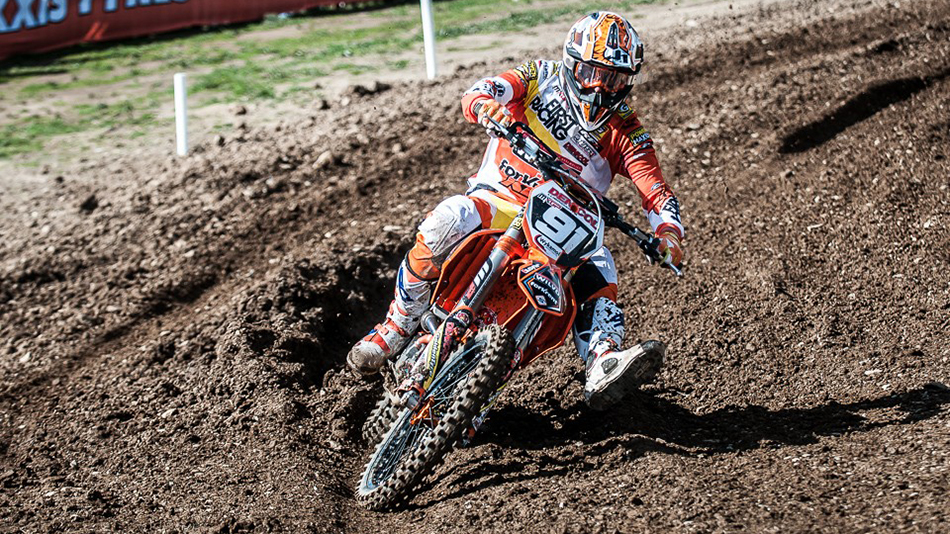 The 2014 Maxxis British Championship fired into life on Sunday at Landrake, after months of enduring the off-season. Obviously, you cannot win the championship at the opening round, but you can lose it, as we have seen in the past. So, with that in mind, let’s take a look at the riders that enjoyed success at Landrake, and those that struggled.

Shaun Simpson: Honestly, I expected Shaun Simpson to win Landrake, and he did. However, I presumed that he would be more dominant than he was. The first moto was slightly odd, as it seemed like he did not have the pace to run with Jake Nicholls and Kristian Whatley (his two main rivals). However, this turned out to be because of a bike set-up issue, which was sorted for the final two motos, evidently! It will be interesting to see how the MX1 class develops in the coming weeks – Shaun isn’t going to have it all his own way, like some thought he would.

Jake Nicholls: Jake Nicholls exceeded my expectations, honestly. I presumed that he was just going to settle for a third or a fourth, and salvage some points. After all, he admitted that he is not going to be one hundred percent for a few more weeks. But Nicholls put in an inspired ride, despite this, to claim the moto one victory and second overall. If he can run the pace of Simpson when he is fighting an injury, just imagine what he will be able to do when he is one hundred percent!

Matiss Karro: Honestly, Matiss Karro should have won the MX2 class. Mel Pocock had a solid showing, but the day belonged to the Latvian. Although I was sceptical about how he would adapt to the 250f, he seemingly had no problems. Matiss got around his fellow title contenders with ease in all three motos, but he wasn’t perfect, as a poorly timed attempt at a pass restricted him to seventh in moto three. However, despite this, he is tied on points with Mel at the moment, so it is a great start to the season for him!

Steven Lenoir: Prior to the start of the season, most believed that Matiss Karro and Mel Pocock would dominate the MX2 class. But, Steven Lenoir may be more of a threat than some presumed, as he looked more than capable of running Pocock’s pace. In fact, the Dantec Husqvarna UK rider could have quite easily won a moto, and even the overall. It will be interesting to see how he builds on this going forward; he is certainly an underdog!

Kristian Whatley: In 2013, Kristian Whatley was unstoppable. However, from what I saw, he seems to have stepped it up again this year, as he looked really good at Landrake. Sure, he did not win, but he was right in the mix. A fifth in the second moto hindered him in the overall results, but even that was a good result, considering the circumstances. Kristian’s result has also left most wondering what he could achieve in the FIM Motocross World Championship. After all, he had no problem running with Shaun and Jake.

Bryan Mackenzie: Well, no one expected that, did they? I am sure that even Bryan himself did not think that he would have a moto win to his name by the end of the day, as he has been on the sidelines in recent weeks whilst recovering from his arenacross injuries. But, despite this, he came out and put in some great rides. Although his results in the first two motos (an eleventh and twelfth) seem lacklustre, he crashed on lap one both times. So, overall, it was a great day for him; he too will be right there all year long.

Martin Barr: This looked like it was going to be a great year for Martin Barr, as he seemingly had the speed to contend for podiums and wins. However, his title aspirations went up in smoke at round one, as he failed to finish moto two and three. In race two, Barr was again up front, but he was taken out by another rider and hit his head and hip. So as a result, he was in too much pain to continue with the day. Thankfully, he broke no bones in the incident. But, Martin has damaged some muscles and ligaments.

Priit Rätsep: Priit Rätsep has had a rough start to his time as an Oakleaf Kawasaki rider, as he again failed to crack the top ten. In fact, he only just made the top twenty overall; he finished nineteenth. Obviously, more is expected of him, but he should get better – arm pump seemed to hinder him at Landrake. In race two, he failed to finish following a crash, and a fall hindered him in the final MX1 encounter too; so it is not like he does not have the speed required to contend. In fact, his ride in the qualifying sessions was impressive, so there are positives for him to extract from the event.

Shane Carless: On paper, the result was not great for Shane Carless. However, when you consider what he had to overcome in the off-season, it was not bad at all. Shane had an injury in the off-season, so he is behind where he needs to be in regard to fitness and setup. This was evident at Landrake, as he struggled as the day wore on. However, a sixth in moto one proved that he would be a top five threat if he was one-hundred percent. In moto two, he also had a ten second penalty, which hurt his result.