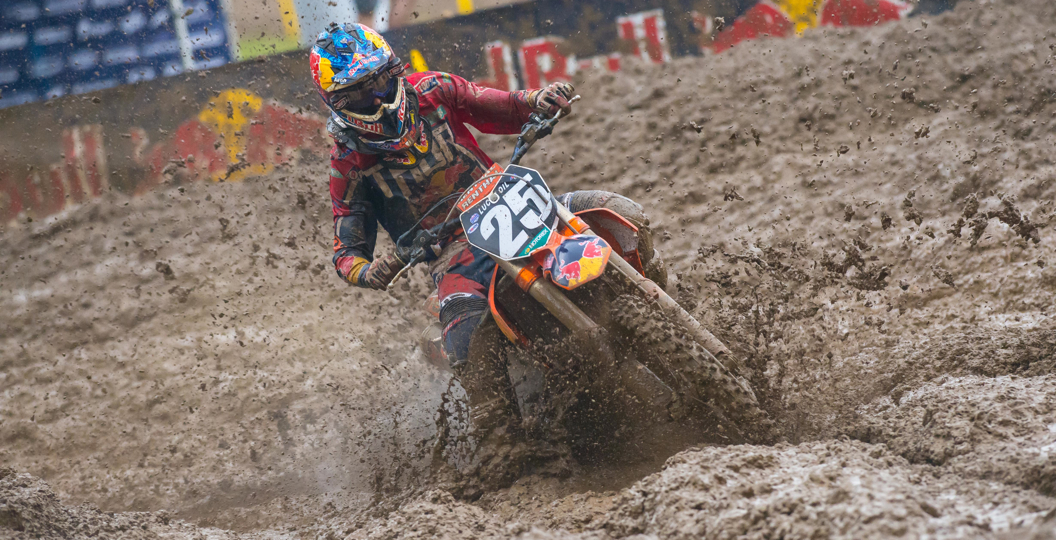 With no noteworthy European races going on this past weekend, we are giving the Lucas Oil Pro Motocross series the ‘Hot and Cold’ treatment. Mud races are not too common in the USA. However, when there is one, it’s bad! The rain impacted the results, as you would expect, as some new names rose to the surface.

Ken Roczen: One of the most popular talking points in recent weeks has been what is up with Ken Roczen? Honestly, I would imagine that the German and his camp have been asking that same question. However, he answered the critics and rebounded in a big way on Saturday, as he stretched his advantage in the standings from seven points to twenty. Of course that puts him in a comfortable position heading into the finale too, as he is no longer in a must win situation – a brace of fifths will secure him his maiden 450F title.

It is hardly surprising that Ken, the European, thrived in the slop, as he would have had to deal with similar conditions in his GP days. In fact, he stated that the rain relaxed him in the morning, which is obviously ideal in a pressure cooker situation.

Trey Canard: Trey Canard has often come under fire for the amount of injuries that he has had to deal with in his career. However, he has been a model of consistency thus far this season, as he has dropped out of the top four in just two motos. Of course, he has excelled somewhat in the last two weeks, as he has claimed two race wins. The Muscle Milk Honda rider made the switch to KYB suspension prior to Unadilla, and that appears to have made all the difference – he’ll be looking to end the year with a bang in Utah.

Marvin Musquin: If I told you that Marvin Musquin is very close to acquiring second in the 250MX series standings, would you be surprised? I bet you would, because I was when I realised! The first six rounds were far from what the Frenchman expected, as he was very rusty after missing supercross with a torn ACL and dislocating his shoulder at round one. However, he has not missed the overall podium since then, and truthfully, you have to think he would have been challenging for the title had he been healthy. Although he missed out on his main goal, his recent wins have been a nice way to rebound.

Joey Savatgy: Seeing Joey Savatgy up on the overall podium may be a huge surprise to most, but he has quietly been making progress in recent weeks. For instance, he had a brace of ninths at Unadilla for seventh overall and went 6-7 at Washougal for sixth overall. Although those rides did not indicate that he would be on the podium in the near future, he was battling with the big guns and putting in consistent finishes, which is something he has struggled with in his pro career.

Jessy Nelson: Honestly, the motocross gods owed Jessy Nelson that moto win after he led a majority of a race at Thunder Valley earlier this year but came up just short. Everyone was on the edge of their seat during that first moto on Saturday, eager to see if he would be able to hold on this time, and he did. It was a well-deserved win and one that he seemed to expect, judging by his attitude post-race. Overall I have been impressed with Nelson since he turned pro. Now if only he would have those flashes of brilliance more often.

Jeremy Martin: Of course we had to extend this column slightly this week, in order to talk about the champ, Jeremy Martin. Although he entered the season as an unlikely contender, he quickly established himself as the one to beat and that is a title that he held all season long, which is quite impressive for someone that is so inexperienced. Overall he has had eight moto wins and has dropped out of the top six in just two motos (and one of those was after he had clinched the title). Is he a worthy champion? Definitely.

Zach Bell: I honestly don’t know what to say when it comes to Zach Bell. When he vacated the amateur ranks, most raved about his unbelievable raw speed, but at the same time were concerned about his tendency to crash. Well, he has not crashed as much this season, so he has improved in that respect, but the breath-taking raw speed has all but vanished. Admittedly, the mud would have been a large factor in his Indiana result, as he is one of the smaller guys, which would make the treacherous conditions even more troublesome. There has been no word on where he will end up next year, but if he does keep that spot beneath the Geico Honda tent, he should consider himself very lucky.

Blake Baggett: At the midway stage of this title fight, it honestly seemed like Blake Baggett was ready to take control of the standings, which wasn’t surprising; he is a former champion, after all. However, his title campaign fell apart after that and he hasn’t really been too much of a factor in the race for the win since Budds Creek. Perhaps his motivation disappeared as his title aspirations faded? I’m sure that losing to a younger, less accomplished rider must have infuriated him slightly.

Eli Tomac: Although Eli Tomac doesn’t really have too much history in the mud; most had him tipped for success when the rains came in Indiana, as he seems to thrive in deep ruts. His maiden 450SX podium came in the rutty, technical conditions in Indianapolis, and he has also commented that it is in these conditions his Honda works best. However, these factors went out the window somewhat when it continued to rain, as it was just a lottery, and one that Eli did not fare too well in (in comparison to his recent performances).

Speed was not necessarily the issue for him, as at times he was the fastest man on track. It was doing that consistently that he struggled with, and that is something Roczen did so well, as he was smooth, calm and collected whilst hitting his lines each lap.

Jake Weimer: I rate Jake Weimer quite highly, but following his performances since moving up to the 450F, it seems I am one of the only people that do. If Weimer is happy and can get some momentum behind him, I believe that he can be at the head of that second tier alongside Andrew Short, Weston Peick and Brett Metcalfe. Of course, he is injury prone, which doesn’t help the situation, but if I were a team manager I think I would give him a shot. Unfortunately, the fact that he scored no points on Saturday will be also be detrimental to his cause.