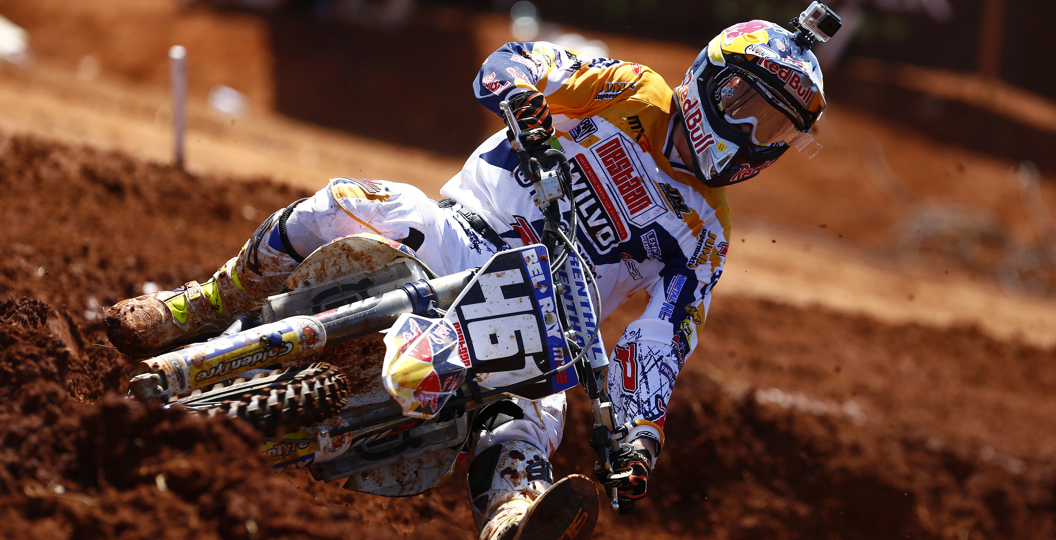 Hot and Cold: GP of State of Goias

Following a lengthy summer break, the FIM Motocross World Championship returned to action this past weekend in Brazil at the new circuit of Trindade. It was an extremely exciting round, as Antonio Cairoli claimed his eighth world title and there was an influx of MX2 riders that were still looking for their maiden win.

Max Nagl: Although Max Nagl has been a frontrunner in the premier class for many years now, it has been quite some time since he claimed an overall win (he last won at Sevlievo in 2010). Finally, following that drought, he topped the box in a dominant fashion this past weekend. His triumph was unexpected, as he withdrew from the previous round with symptoms that resembled what he dealt with last year when he was fighting a virus. However, he was fine after some rest, evidently. It was arguably the best ride of his career, as he led every single lap, including the qualifier on Saturday. It was an important one for him to win too, as Honda Brazil were title sponsors of the event.

It has been quite some time since Max last had the momentum that comes with a dominant victory on his side, so it will be interesting to see what this confidence does for him heading into the season finale. You have to presume he will be a contender again in Mexico – the conditions should suit him.

Romain Febvre: So, yet another rider has acquired their maiden GP win in Jeffrey Herlings’ absence. Like Max Nagl, Romain Febvre was certainly deserving of the victory, as he proved to be the strongest rider over the two days, despite being hindered by an illness. Febvre was actually sick during that final moto, so he certainly dug deep in a bid to stand atop the podium; fortunately it paid off for him. The deceivingly slick surface of Trindade was one that I suspected Romain to thrive on, as he is a very technical rider; the jumps would have lent themselves to his style also.

Tim Gajser: With the series leader out of the picture, Tim Gajser is certainly looked at as one of the riders that can win races and potentially a GP, should things work in his favor. However, considering the situation that he found himself in this past weekend, it was surprising to see him claim that maiden moto win in the second MX2 encounter. On the Saturday Tim crashed hard and banged up his shoulder as a result, but it clearly didn’t bother him too much. He was dominant and poised at the front of the pack in moto two, which was really quite impressive.

Antonio Cairoli: Although he finished up in third overall, which is not spectacular by his standards, I had to include Antonio Cairoli in this column. He just clinched his eighth world title! It has been a testing year for him both on and off the track, as he lost his father prior to the British GP and at times Clement Desalle proved to be faster. However, in the end he prevailed over the full season, which is undoubtedly his greatest strength. Tony really isn’t too far from Everts’ record at this point either, although he will more than likely face some stiffer competition in 2015. However, you would be a fool to doubt him.

Dean Ferris: Before I get into Dean Ferris’ weekend, I feel like I need to clarify. I do not place a rider in this column because they sucked, but because the weekend didn’t go their way for whatever reason. Obviously the fact that Dean broke his right femur was the worst-case scenario. Ferris arguably had his best ride of the season before his crash, as he battled at the front of the pack and showcased what he is capable of on the big bike. Unfortunately, this sport can be cruel sometimes and now he is facing a recovery period in an attempt to get back to one hundred percent.

Jeremy van Horebeek: Following an extremely consistent run through the first half of this year, the season has unraveled somewhat for Jeremy van Horebeek. After cutting his eye open at the previous round, he injured his ankle in qualifying on the Saturday; he admitted he was distracted by the prospect of locking up second in the championship. Fortunately he was able to ride around in the first moto to secure that position, but he then didn’t show in the second moto in an attempt to not do further damage to his ankle. Van Horebeek was scheduled to have a medical check-up last night, although no update has been released at this time.

Glenn Coldenhoff: Glenn made a respectable return to racing at the previous round, the GP of Belgium, but failed to break the top ten overall this past weekend. Coldenhoff had five weeks to build on his fitness and race craft, so most expected him to battle for a spot on the box at Trindade. However, some poor starts on the cusp of the top ten hindered him on a track that was extremely hard to pass on. He made no real progress in either moto and despite the conditions; I would have expected him to at least claw his way closer to the top five.

Aleksandr Tonkov: I am beginning to question whether I expect too much of Tonkov. In 2013 the Russian proved that he had the potential to podium on a few occasions, and with increased support this year, more success seemed imminent. However, despite the fact that he has been right around the top five on a few occasions, he just hasn’t had too many flashes of brilliance – you hardly notice him out there. Perhaps it will just take more time for him to unearth his potential?