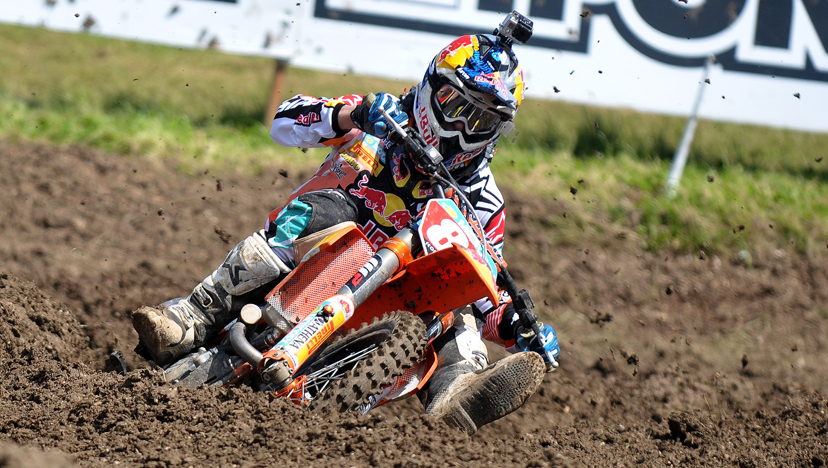 The British GP is in the books! It really was a brilliant weekend, as there was great racing all weekend, and the weather held off! What more could you ask for? There were a few riders that thrived around Matterley Basin, as usual, but others struggled. In this piece, we look at the MXGP and MX2 guys – we’ll have a full breakdown of the EMX classes later in the week.

Antonio Cairoli: It was a difficult weekend for Antonio Cairoli, obviously, as his father recently passed away. So, with this in mind, it was unknown how he was going to fare this weekend – it really could have gone either way. On Saturday, Toni seemed distracted, but he flicked a switch when it mattered, and looked dominant. Honestly, I am not sure that he would have won the first moto (and the overall) if Desalle had not crashed, but, factors like that are a part of motocross. Antonio was closing rapidly on Clement in moto two, but he had a mechanical issue with his back wheel, as he explains here: “I broke some spokes, which were stopping the back brake. I was lucky that there was only four laps to go.”

Clement Desalle: Confidence is crucial for Clement Desalle, if he is going to top the podium, and fortunately, it looked like he possessed that quality this past weekend. I don’t think that I have ever seen him go that much faster than the rest of the field; he was definitely superior at different points throughout the day (we have an in-depth report on that coming up tomorrow). Unfortunately, a fall (that was quite bizarre) in the opening race stopped him from taking the overall win, but he must be feeling confident, despite this – he is back to best!

Jeffrey Herlings: Jeffrey Herlings’ ride in the qualifying heat on Saturday was most impressive to me, and here is why. It is in those sloppy conditions where he is usually most vulnerable, but, despite this, he still put on an incredible display. In the twenty-five minute race, consisting of eleven laps, Jeffrey stretched out a gap of fifty-one seconds, and was putting in lap times that were a full second (at least) faster than his competition. Of course, this isn’t too surprising – we all know how good he is. I believe that no one will touch him for the rest of the year.

Tim Gajser: It is hardly surprising that Tim Gajser landed on the MX2 podium, it was going to happen eventually. But, the way that he did it was impressive, as he was consistent across the two motos (something that has been a problem for him), he overcame a bad gate (he finished sixteenth in the qualifier), and he passed a lot of guys that are now considered 250F veterans. I believe that his race craft is commendable, as he didn’t rush things, he sat behind the riders that he was battling with and waited for an opportunity to present itself, which paid dividends in the end.

Steven Frossard: In recent weeks, I have been quite critical of Steven Frossard, but that is only because I know what he is capable of! Frossard has always had the speed and ability (in the MXGP class, that is – he is definitely a 450F specialist), but the results have not materialised because of his many crashes. Frossard hasn’t finished on the overall podium in more than two years, for instance. But, on Sunday, he proved that his speed is still where it needs to be, as he chased Cairoli for the duration of the first moto on Sunday.

Admittedly, at times, I did question whether Antonio was riding down to his competition, as Frossard could not get any closer than two seconds (the gap stayed like that for a lot of race one). With a few laps to go, the Frenchman got the gap down to a second, but he then lost half a second on each of the next three laps, which halted his charge.

Rui Goncalves: I’m baffled, honestly. I feel like Rui Goncalves may be on the same path that Jonathan Barragan was on, where he gradually slips from a podium contender to a rider that struggles to get points. Admittedly, he does still garner a handful of top ten moto finishes, so he is competitive. But, there are rounds (like Matterley Basin) where he seems to be a shadow of his former self. In moto one, he was just cruising a lot of the time, and then he got a thirteenth in moto two. If I were to predict where his career goes from here, I would bet that this will be his last year in MXGP – I just cannot see him having a ride next year.

Kevin Strijbos: Before the weekend begun, I predicted that Kevin Strijbos would be battling for the win at some point. However, instead, he had one of his worst rounds of the year, as he was not as much of a factor as he has been recently. I do think that Matterley Basin is one of the tracks that may not lend itself to his style, so I do expect him to be back at the front in France this weekend. Kevin admitted on Twitter that he did not ride well at all, so that sums up his weekend.

Ken de Dycker: I will basically reiterate what I said following the Spanish GP here. Why is Ken de Dycker back? I really feel like he would benefit from some more time off; he clearly isn’t where he needs to be. Sometimes you see a rider come back a little earlier, and attempt to ride themselves back into shape, but fitness is not the issue here, it’s speed that Ken is missing. In moto one, he pulled in and just rode off, as if he just threw in the towel, so he is seemingly frustrated.

Maxime Desprey: I don’t really expect a lot from Maxime Desprey, honestly, because he did not do too much in his rookie season last year. But, he did show some flashes of speed, which is something that has been missing thus far. In my opinion, Matterley Basin is one of the tracks where he should excel, however, he scored just three measly points in the two motos. Maxime really needs to show some potential in the near future, in order to ensure that he has a future in the MX2 class.

Christophe Charlier: Well, you can certainly call Christophe Charlier’s final season in the MX2 class a disaster. After returning at the Spanish GP two weeks ago, it now seems like he will have to miss the next couple of rounds with a torn meniscus. When it rain, it pours, as Charlier is finding out right now. It may be worth him sitting out until he is ready to fight for a spot on the podium again – he has nothing to lose!