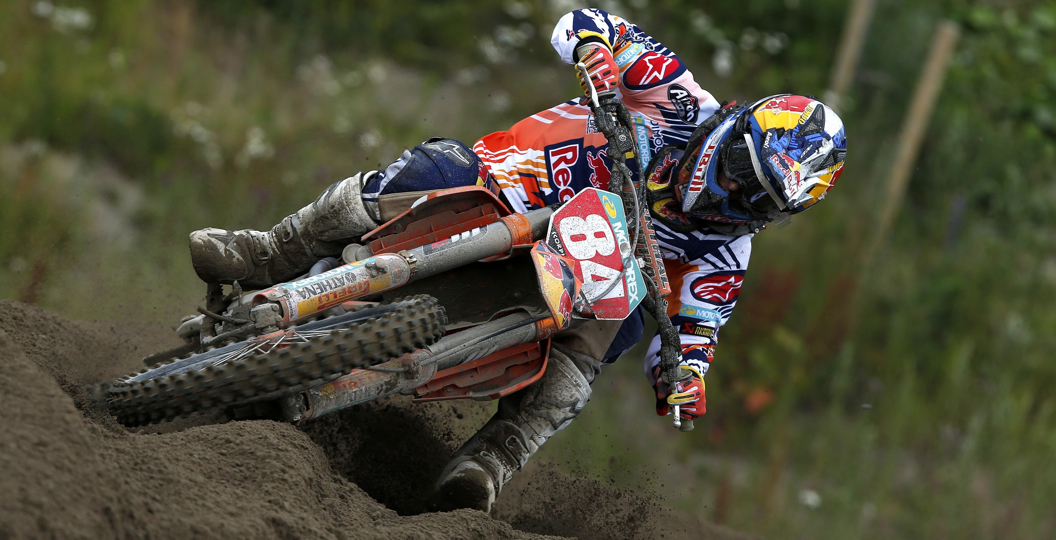 Hot and Cold: GP of Finland

Although the Finnish GP may not generate the same kind of excitement as some of the other rounds, it seems that we can rely on the track (with a sandy base that resembles Valkenswaard) to provide some brilliant racing, judging by recent events.

Jeffrey Herlings: I almost did not feature Jeffrey Herlings and Antonio Cairoli in this column this week, because their performances were nothing out of the ordinary. However, I felt like I had to at least acknowledge the dominant rides that Herlings had. Jeffrey is seemingly at his best, as he won both motos by more than a minute and lapped up to eighth in moto two.

To me this just shows that he has outgrown the MX2 category, and it is time to move up; it is frustrating from a fans point of view, as Jeffrey holds the key to great racing in both classes. Anyway, I digress. Unless something ridiculous happens, he is going to lock up his third world title at Loket at the end of July, which is unprecedented. If he had not missed the Brazilian GP, he could have won it this past weekend!

Steven Frossard: It was hardly surprising to see Steven Frossard up on the overall podium, as his speed and ability cannot be called into question. However, he does have a tendency to throw it away whenever he is close to a top three finish. For once, the Frenchman pieced two solid motos together this past weekend, although an issue at the midway point of the second race jeopardized his position. But to his credit, he rebounded and picked off every rider that past him to finish second. Admittedly, he was a little ragged whilst doing that, so much so that it seemed another crash was imminent.

However, he did what he needed to and claimed his first podium finish since the first round in 2012! It is quite funny that a rider that is by no means a sand specialist has only finished on the podium on rugged, sandy tracks in the last three years. Shifting gears slightly, Steven is searching for a contract for next year currently, so performances like this are needed. It is slightly surprising that there has not been much talk about him, but if the Ryan Villopoto deal does not materialise I expect KRT to find a spot for him.

Tim Gajser: Tim Gajser is quietly establishing himself as one of the leaders of the second tier in the MX2 class; he was not in that category two months ago, so his progress is astounding. I feel like this has been overlooked somewhat though, perhaps it is because we knew that he had the potential to register results similar to this? Tim is very quiet and doesn’t do anything too flashy, so some do forget how young and inexperienced he is.

Obviously his English is not great (although it is very good when you consider all the factors) and he is not as outgoing as guys like Herlings and Roczen were when they burst onto the scene. I do really think that this is why some overlook him and do not place him in the same category, but he could find himself as a consistent second place finisher next year if he keeps progressing at this rate. Gajser was again solid on his way to another podium finish in Finland – it is beginning to become predictable!

Kevin Strijbos: Years from now, we will look back on the results from the Finnish GP and think that this was just another third place finish for Kevin Strijbos. However, it was so much more than that. Following a solid fifth in race one, Strijbos started the second race outside of the top twenty and he stated that he was not really feeling it. But he put his head down and chipped away at the deficit until he latched onto the back of the lead group in the closing stages. With just laps remaining his fitness shone through, as he moved up from eighth to fourth.

Kevin has finished fourth and fifth many times this year, but he earned this one. The Belgian may actually be close to stealing a win, if all of the cards fall his way. For riders like Strijbos, Frossard and van Horebeek, Loket will be their greatest opportunity to clinch a victory, as Cairoli typically struggles there.

Shaun Simpson: I usually only include four riders in each section of this column, but I could not let Shaun Simpson go unnoticed – he was flying! If he had not crashed halfway down the start straight in moto one, I am sure that he would have finished up on the overall podium, which would have been great for him and the Hitachi Construction Machinery KTM UK team. But the knowledge that he was capable will surely aid him in the coming weeks. Shaun has certainly established himself within the top tier of riders, which should help him when it comes to finding a ride for next year.

Petar Petrov: Petar Petrov is better than this. The Bulgarian should have been a top five finisher at Hyvinkää – he thrives in the sand! His fourth in the qualifying heat is a testament to his skillset, but he just could not capitalise in the main races. Petrov was hindered by bad starts all day; he was caught up in that first turn incident in moto one, so his results do not seem as bad when you factor that in. His sixth in race two was commendable, especially after starting fifteenth. I look for him to shine at Lommel, as he has been strong there in the past. I remember him finishing in the top five there in 2011, against a stacked MX2 field.

Aleksandr Tonkov: I have said many times that I expect more from Aleksandr Tonkov, but I seem to be one of the only ones. Admittedly, his results have been fairly similar to what he achieved last year, but it seemed that the natural progression was for him to become a consistent top five finisher. Instead he has been quite inconsistent, and has had one good moto and one bad at a lot of the rounds. There is certainly room for improvement, but a sixth in moto two shows that the potential is there, hence why he will more than likely stay on a factory bike next year.

Jeremy van Horebeek: Everyone makes mistakes, and the consistent run that Jeremy van Horebeek was on had to end at some point. A mechanical issue caused by the crash in moto two meant that he had to pop into pit lane and he lost even more time, but he eventually got going again and garnered a tenth. His title hopes before Hyvinkää were slim, but I would say they are virtually non-existent now (unless Cairoli bows out with an injury). Still, his runner-up spot is safe, thanks to the absence of Desalle. Jeremy certainly showed a good quality by staying out there in race two.

Thomas Covington: I think that we all knew that Thomas Covington was going to have a rough go of it this year, but this has certainly gone worse than most expected, as he again scored no points in either moto. Admittedly, he should have; it is not like he simply was not good enough. But at best, it seemed like he could have garnered a couple of points at least. I expect Loket will suit him more, and perhaps he will thrive at the final two flyaway rounds? He fared well at the first couple of rounds this year, which took place outside of Europe.