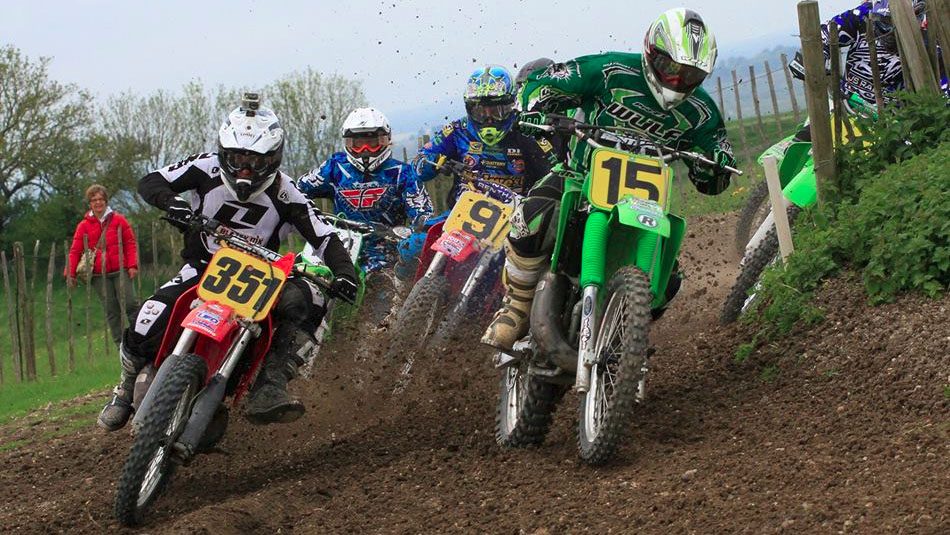 Hope For Huck Appeal – The Story

35-year-old Mark Hucklebridge (Huck) has been a dominate figure in the Motocross industry for the last 20-years, as a rider and also a race organiser plus one of the top ACU trainers in the UK. In 2010 his life changed when he was diagnosed with stage 4 cancer, read his story here.

He started riding at the tender age of 10 after watching his Dad and Uncle Mike race he got the bug, a good bug for him to catch as he went on to have a very successful Motocross career. It saw him race for some of the UKs best teams – MJ Church Kawasaki, Factory VOR, TM UK, KTM UK, Honda UK, Motoxtreme Kawasaki, Chambers KTM and Hockey Honda, he became a very popular and well liked rider within the racing community.

Huck retired from professional racing at the end of 2008 and in 2009 he was offered a great opportunity by the ACU. One door shut and another opened, Roy Barton who at the time worked with the ACU offered Huck the opportunity to work with the ACU training and developing young Motocross riders. In 2009 Huck had a fantastic year and the three trained riders Josh Waterman, Ryan Houghton and Ben Watson – won every group in the British Youth Championship that season, all three riders have gone on to further their career in Motocross with the skills and knowledge taught to them by Huck.

In the process Mark and his wife Emma set up the now very established Hucklebridge Events to teach the Academy riders, run their own events and also a practice track near their home in Marshfield.

Mark gained his NVQ teaching course of excellence working with the MSA (Motor Sports Association) at Loughborough University; this enabled him to teach young riders the art of becoming professional on and off the track and was fully funded by the government. Mark set up structured training for the track and a curriculum was written for every MX technique.

Hucklebridge Events with their club (Moredon) now successfully run the UK Girls Nationals in September and have done so for the last five years. On the 8th and 9th March this year they will run a special memorial race for Chris Tucker who was the director of Moredon MX Club which Huck and Emma run. Chris sadly passed away in 2013 after a very short illness.

Further to their events for the last eight years, Huck and Emma also run Circuit Training fitness classes, it was originally set up for just MX riders but now people from all aspects of life attend these sessions and are put through their paces by the Hucklebridge pairing! Each week between 25 – 30 people are tested to the limit, with 55 people coming through the classes so far this year (Feb 2014).

Emma (34) and Mark (35) have been a couple since 1998, they eventually tied the knot in 2006 and their son Charlie was born in 2007. Nothing stops in their family and they are continuously on the move and working hard to achieve their goals and targets.

In 2010 their lives took a drastic turn, Mark had experienced slight bleeding whilst going to the toilet. He sought medical advice and after a number of tests and scans he was diagnosed with stage 4 (spread beyond the original tumour) bowel cancer, a huge blow for the Hucklebridge family.

He was told that the tumour in his bowel had been in place for between 5-10 years and had also now spread via the lymph nodes into his lungs.

Just before Christmas in 2010 Huck started his first dose of Chemotherapy which was given to him via a Hickman line which went straight into a vein near his heart. It was an extremely difficult Christmas for the family as Emma was struck down with swine-flu and Charlie was sent to stay with relatives so he did not get poorly and Mark went to stay with other family. The family were able to see each other for only an hour on Christmas Day with Mark having to wear a hospital face mask to ensure he did not pick anything up, as his immune system was weak due to the intense course of Chemo he was receiving.

After three months of Chemo, Mark endured five weeks of intense radiotherapy with more chemo to shrink the tumours. This was carried out every day at his local hospital, the RHU in Bath. After a short break, just six weeks Mark had his first major operation in June 2011 to remove the tumour in his bowel. Over a foot of the large bowel was removed and he was left with a colonoscopy bag for a while.

Mark then had to go through three more months of chemo and then the doctors reversed his colonoscopy. In May 2012 he went in for surgery again for another major operation where the middle lobe, around a 1/3 of his right lung was removed.

In the September of that year he was back in again for yet more surgery, this time to remove a quarter of his liver after routine tests showed a tumour was present there. As a family at that stage they really believed that Mark had beaten the cancer and that he was on his way to a full recovery.

He went for three routine blood tests over a period of nine months and his blood levels began to drop and everything was looking very hopeful. In January 2014 the blood test increased rapidly showing that the cancer had returned and had been growing at a fast rate for the past three months.

The most recent scans showed that Mark has nine metastasis (small tumours) spread between both lungs which has now made his cancer inoperable/terminal. He also has an inflamed area in the lymph node in his groin, very close to the original tumour site, this is also inoperable.

The future for Mark will include further more tests and scans to monitor the tumours as well as palliative chemo (used to shrink tumours), which will start the first week in March and will continue for the rest of his life, no one knows how long this may be but hopefully a few years yet.

Mark is determined to fight and hold back the cancer as long as possible and enjoy every minute with his family and friends. Mark wishes to say to anyone that might be slightly worried about anything to go and get checked out. If you are still not happy ask for a second opinion as it is easier to treat the earlier you can catch it.

Before Mark starts his next batch of intense Chemo, him and Emma will be competing in the Bath Half Marathon to raise money for the Forever Friends Appeal, Bath RUH. You can donate here –

HELP! HOW YOU CAN HELP! WE NEED YOUR HELP!

The main reason for this message is to help promote and make aware the ‘Hope for Huck Appeal’. The guys/gals at MX Vice and myself (Carly Rathmell) have clubbed together for two reason – one to raise some money for Huck and his family and two raise money for the Forever Friends Charity –

We are hoping people within the Motorcycle Industry will get behind this and support Huck and Emma in what is now going to be very tough times. We are arranging a number of online eBay auctions to raise some money – the auctions will be placed herehttp://www.mxvice.com/features/racing/mark-hucklebridge-auction/ and also on the Facebook Page – ‘Hope For Huck Appeal’.

We are asking anyone who may have something they can donate that we can sell to please get in touch with us and help us raise as much money as possible. Huck has put so much into our sport and now it is our turn to put into Huck and help him. If you have anything, signed, unsigned, race kit, products, tickets, anything we will sell! Please e-mail [email protected] or [email protected] to arrange delivery, logos etc.

This was posted by Mark Hucklebridge on his Facebook status on the 30.01.14

“Family and friends. I had the worst news last night that my cancer has come back in both lungs and in my pelvis. I can’t have surgery as there is too much; I have to hope the chemo can hold it back for as long as possible.

I am feeling fit and well at this time and am still training for the bath half in 4 weeks’ time. Then start my chemo the week after.

I am still myself and don’t expect to be treated any different or be scared to talk to me. We are as a family holding it together and going to enjoy the valuable time I have left. I don’t know how long but be sure I am going to fight it all the way to the end to see my little man grow up and be a big part of Charlie and Emma life for a long time to come.

I am so lucky to have such good people around me that love me and care about me. Thank you to all who have helped me over the last 24 hours.

He has also asked to add the following to this message –

“All the money raised will go to the Forever Friends Appeal. They are developing their cancer unit and want to be in the top 5 in the UK for research and care. Dyson is a big sponsor as well as MJ Church and through myself have pledged to raise £50k this year.

Before I start my treatment Emma and myself are running the Bath Half marathon with lots of our friends, as a group we have already raised over £2500 so far.

I would personally like to thank everyone who has donated gifts and have brought items and Carly and James for putting this together. Let’s hope that your donations will help the doctors to find a cure for Cancer soon and a cure for me.

I would also like to thank all of my friend and family and especially my wife Emma for being so strong for our little family.

I’m going to fight this as long as I can to spend as much time (hopefully many years) doing great things with everyone around me.”

Building a new beginning for Cancer treatment at the RUH

One in three people are affected by cancer. Everyday lives are changed forever by this disease, which indiscriminately alters the futures of people everywhere. Inspired by the design and results of the Dyson Centre for Neonatal Care, and the UCLH Cancer Centre which focus on an individualised and holistic approach to the treatment of cancer patients, we are building what we believe will be the best cancer center for a district general hospital in the UK. This cancer center will be a state of the art building, taking a holistic approach that is designed to produce a highly beneficial healing environment for patients and their families.

Changing the shape of cancer patients’ futures comes at a price – and within a year of launching the Campaign the target was reached and has been extend to £8.5m enhancing what is possible even further, bringing the estimated total cost of the cancer center to £23.5 million.