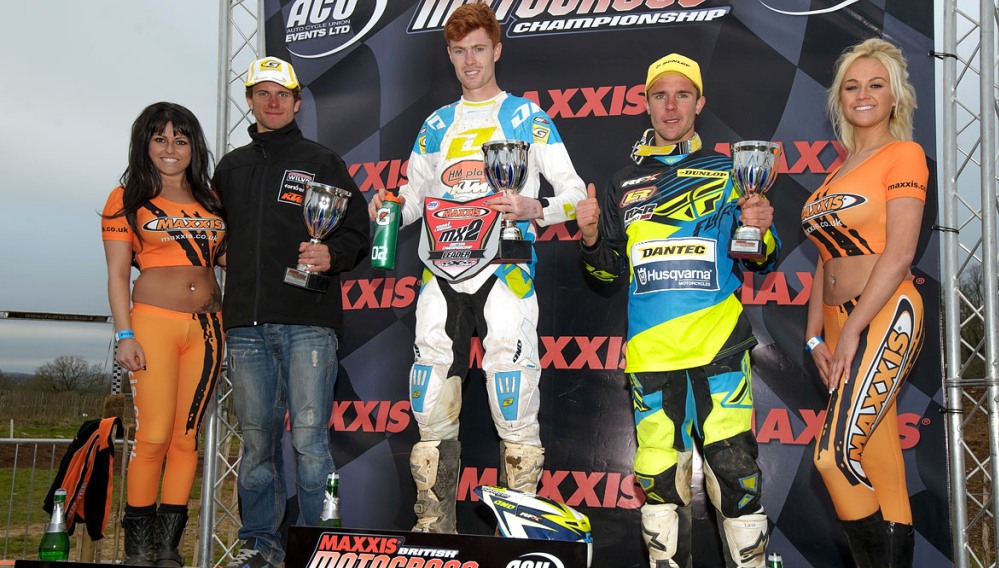 For HM Plant KTM UK, the domestic Maxxis British Motocross Championship got underway last weekend in sunny conditions at Landrake in Cornwall, ending the day with two red plates under the awning.

Hoping to improve on his results at Si Racha, Mel launched into an almost perfect campaign. With two seconds and a third place in three very consistent races, and sporting a fat lip from a mouthful of rock in the middle race, he took top honours as the sun set over the horizon. Similarly, the number 200 had every reason to smile at the end of the day. With a blinder of a first race that saw James sitting pretty in second for the majority of the race, two more consistent runs in the other two races gave him forty-three points and a sixth place overall to take home.

Ben also showed a flash of brilliance again. Out of the points in the first race, he found himself in third in the second, with Mel just yards ahead. The third race looked to be a repeat of the second, but after being used as a berm by a rival, Ben found himself in the back of the pack, playing catch-up to end twentieth for an eleventh place overall on the day. For JC711, his qualifying position set the tone for the day. Coming from outside the top twenty in every race, James fought hard for every position to end consistently in the top fifteen for a twelfth place overall.

In the MX1 class, Shaun mixed it up with Grand Prix colleague Jake Nicholls and current MX1 champion Kristian Whatley. With two wins and a runner-up position, Shaun was the clear winner on the day. Josh missed out on points in his first race after crashing out with just a few laps to go; he made up for it in the second race though with a great seventh place. The third race saw him streak across the finish line in thirteenth after going down whilst in seventh, for a fifteenth place overall on the day.

“Super-pole wasn’t that great, I ended fifth. In the first race I didn’t get a great start and had to battle away to second, so that was a pretty good ride. In the second race Karro and I got away clean, but in the second corner a rock hit me in the mouth and I could’ve sworn that it’d knocked my teeth out. I had a lot of blood in my mouth and just rode round and got a lucky second. The third race was a right hoo-hah; Mackenzie and I got out front, then Karro came through and passed us, and then went down. We carried on, then Karro went down a third time, and whilst he’d gone down, Lenoir passed me. I’ve won the meeting overall though, so I’m pumped.”

“I didn’t really come here expecting too much. I’ve been preparing for this for a long time, since my injury last year, but to come here and have three really consistent results and being in the top ten every race, I’m really happy with that. We’ll build on that again and again, and hopefully at Lyng we can get the same sort of thing, and keep trying to be consistent. That’s what I’m looking for this year.”

“It’s been a very difficult day today, I made it hard work right from the get go with a bad qualifying position, I just got held up by people crashing, stalling it and stuff in front of me, so that meant starts were very difficult. I don’t think I had a single start inside the top twenty; I’d start outside the top twenty, get up to the top ten and then make little mistakes and crashes. I had two fifteenths and a thirteenth but I ended up twelfth overall, so the overall wasn’t as bad as it looked it was going to be. Anything outside the top five I wasn’t going to be happy with, so it wasn’t a good day.”

“Qualifying was ok, I had an eleventh, then in the super-pole didn’t have an amazing lap and made a few mistakes, but I stayed eleventh, so that was ok. In the first race I got a bit of a bad start, it was pretty hard to pass, but I tried to pull through. In the second one I had a good start and somehow ended up in third. I was actually quite close to second, so I was very happy with that. In the last one I had a good start again, was about fifth and got smashed off the track basically with nowhere to go. Then I just made a few mistakes and struggled to pull through. I ended in the top fifteen in the points. I knew I could do it after the second race, but putting together a race is quite hard.”

“Qualifying went well, I’m not so keen on super-pole but ended up second in that. First race didn’t go great, got a bad start, rode tight and wasn’t really happy with the setup we had in the first race, which was a shame because I felt that if I’d had the setup we had in the other two races, I could’ve won all three today. We got our heads together between races, changed the rear tyre, the gearing and a few other bits and I felt a groove in the second and final races, which was pretty good. Can’t take it away from Jake and Kristian though, they’re riding great. It’s always interesting to come back to race in your home series because the guys aren’t slow. I was definitely pushing. I’m looking forward to the rest of the championship; I’ve got the red plate now so happy enough with that.”

“Qualifying was not good at all really, I just didn’t get a clear lap in and qualified twenty-fifth. Went into race one, struggled with the start, managed to come through to seventeenth and had a little crash to end in twenty-first. In the second race I got a really good start and was running in third behind Simpson and Anderson, then made a couple of mistakes, dropped back and finished seventh. In the last race I gated about seventh again, then dropped to eighth, tried to pass Moffat for seventh, made a mistake and crashed. That dropped me to fifteenth and I recovered to thirteenth, so I’m happy with that. A good start to round one.”

“A really good start to the 2014 British Maxxis Motocross Championship for HM Plant KTM UK with all riders scoring good points in all of their races. In MX1, Shaun didn’t make his accustomed good start and made a couple of minor mistakes causing him to lose touch with the leading duo of Nicholls and Whatley. In motos two and three however, he made amends with two start to finish wins in what were perfect conditions on the Landrake circuit.

“In MX2, Mel Pocock came away from Landrake with the red plate as Championship leader, despite receiving a rock to the face in moto two which caused some lacerations to his lip. He is still recovering from his illness in Qatar and Thailand which sapped his strength. James Dunn carried his early season pace in testing through to his racing, running in P2 for most of the race, eventually ending up fourth – his best result in this class. In moto two, Ben Watson stepped up to the mark with remarkable speed and secured his first ever podium position in this Championship with a well-deserved third. James Cottrell continues to improve in his first year on a KTM 250 SX-F, scoring consistent points in all three motos. All four of the team’s riders are now in the top twelve of the MX2 Championship.”