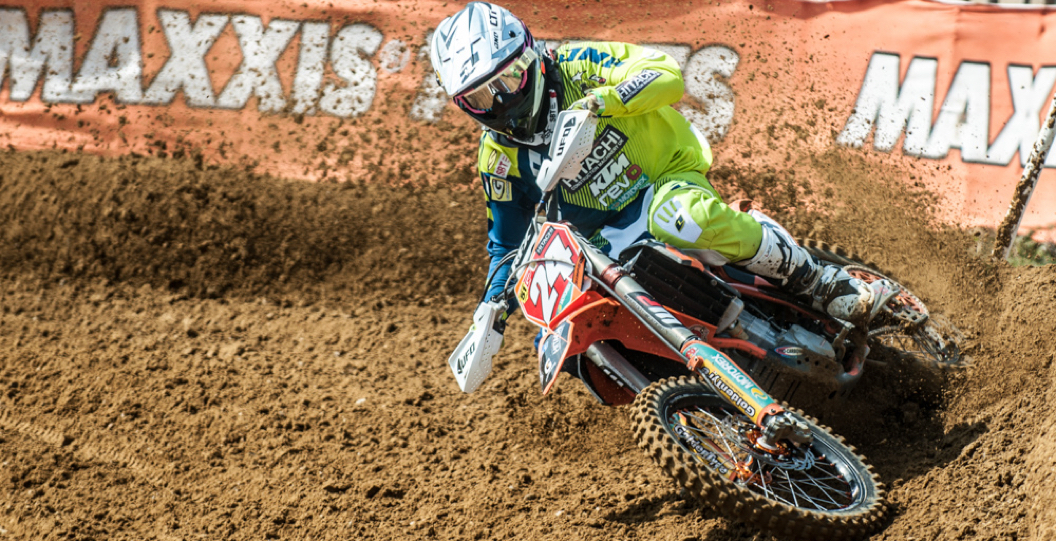 The leading British team in the FIM Motocross World Championship and also on the domestic UK off-road motorcycle racing scene, Hitachi Construction Machinery Revo KTM UK, are pleased to announce a stellar roster of athletes for their international and national campaigns in 2015.

Once again providing important representation in the premier class of Grand Prix, ‘MXGP’, is 2014 British Champion Shaun Simpson who pushed up into the top five of the standings this year and also claimed a podium finish at Lommel for the Belgian round in August. The 26 year old will steer the 450SX-F in search of more GP acclaim and wear the number one plate in native competition as he tries for back-to-back title glory. Contesting the MX2 class of the FIM series will be one of the UK’s most exciting young prospects in the form of Ben Watson. The 17 year old will make his full-time debut at the highest level after capturing chequered flags in the hotly contested feeder class, the EMX250 European Championship, during 2014. Hitachi Construction Machinery Revo KTM UK is pleased to welcome Bulgarian Petar Petrov to the fold and to complete the team’s slate for MX2. Still only twenty years of age, Petar already has five years of Grand Prix experience and drew closer to his first podium finish in ‘14.

The racing operation will cover a comprehensive calendar that stretches from February to October and involve travel on four continents. It will be managed by Revo’s Mark Yates with owner and Team Principal Roger Magee overseeing the project.

“This year we found a formula that worked for us and we delivered results consistently every week whether we were at a GP or winning British Championship rounds. We had a couple of rough moments at the end, such as the shoulder injury in Brazil and the bad luck at the [Motocross of] Nations but overall it was a successful and rewarding year,” said Simpson who brought international recognition to the team, a third British title in four years and also dominated the recent Weston Beach race with Watson also on the podium at the popular Weston-super-Mare spectacle. “As soon as it became clear that we wanted to continue working together in 2015 then we talked with Roger and chatted about some ideas on how we could make a stronger push for next season. I’m happy it is all sorted and the winter is already planned out! I’m settled in an environment that I know and trust and we are clear on our goals for next year already.”

“2015 should be good, something totally different and I’m looking forward to it,” said Watson. “I had some options to move for next year but I wanted to stay around a team and people that I knew as I felt it would be the best platform for me in my first year in GPs. I hope to have a good winter now and then just do the best that I can.”

“I’m looking forward to trying the KTM. They have such a good record in the class and I think the slightly bigger and longer chassis – as well as that engine power – will be good for me,” said Petrov. “I still have to show what I can do in Grand Prix. I had small injuries this year and they seemed to stop me getting up to a level that I know I am capable of. I was top five a couple of times but couldn’t string it together and then hurt myself at a charity race unfortunately that finished the season. Anyway, I’m looking forward to working with the guys and having a strong push in 2015.”

“2014 was another season in the evolution of the team where we increased our status across the board,” says Magee. “Shaun was doing the business in MXGP, Ben made a big impression in EMX250 and we all feel that he is ready to jump into MX2 with both feet, and then we also had Natalie Kane going for the title in MXW until her injury. So it is important that Shaun and Ben have a good and stable run into fresh challenges in 2015 and we also look forward to seeing what Petar can do on the 250. He is a big guy but strong and hard-working so he is a considerable asset. We have changed a few things behind the scenes. Thanks to the invaluable and continued support of our partners and key backers like Hitachi and Revo I feel we can be even more optimistic about our possibilities next year. It’s only November but I feel excited about the upcoming season already.”

“I’m thrilled to be able to take on the role of Team Manager and I appreciate the faith and trust that Roger has put in me for taking the team forward into 2015,” commented Yates. “Revo have not only been a major sponsor this year but also a valuable technical resource and facility. I feel that Revo – along with Sam Yates – has clearly shown the dedication and ability to form part of the title name of the team and this goes a long way for Revo as a brand. Along with the full support of Shaun, Petar, Ben and the rest of the team I am looking forward to the challenge and plenty of success in the forthcoming season.”

“On behalf of Hitachi Construction Machinery Revo KTM UK I would like to congratulate the team for their tremendous success over the past four years,” says HCMUK CEO John Jones. “We look forward to seeing their winning formula in action again in 2015 and wish them many more future successes.”

Simpson, Watson and Petrov will spearhead of the crew’s racing strategy in 2015 but the squad is also amplified and bolstered by the presence of James Cottrell (who will be hoping to put the injury frustrations endured in 2014 behind him and lead the assault in EMX250) and Curtis Trimble (providing representation in 85cc British and Irish national championships as well as selected European and Dutch rounds). Hitachi Construction Machinery Revo KTM UK is also currently negotiating with James Dunn – depending on the former EMX250 star’s recovery from a leg injury.

The 2015 FIM Motocross World Championship consists of eighteen Grands Prix in sixteen different countries and begins at Losail, Qatar on February 28th. The eight round Maxxis British Championship is slated to launch on March 15th although the full list of venues is still to be confirmed at the time of writing.