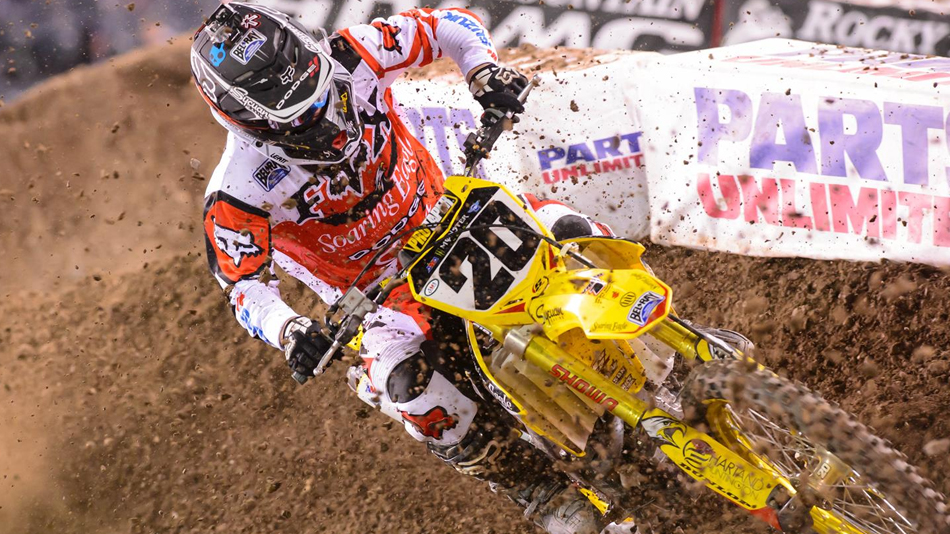 After a performance in Phoenix last week where Hill couldn’t catch a break and missed the transfer from his heat race, semi and LCQ by one position each time, Hill looked to have worked through some of the issues with his injured back and was feeling positive at the third round of the AMA/ FIM World Supercross Championship at Angel Stadium in California. “I’m looking forward to the rest of the season and finishing on top of the podium before it is all said and done,” said Hill.

Both Hill and team-mate Broc Tickle were in contention to transfer straight to the Main, running fourth and fifth respectively for much of their heat race. With two laps to go, Tickle charged past his Hill for the qualifying spot, only to have his front end wash-out a couple of turns later. That left it to Hill to carry team colours and he looked on track to take the final transfer spot until Ryan Dungey made an aggressive move and stuffed Hill in the final turn to steal the transfer position.

However, Hill was undeterred and went on to win his semi in convincing fashion. “I wasn’t sure I was even going to be able to race this weekend because I was in so much pain from back issues,” said Hill. “I’ve got to give-it-up to the team for making it possible. I spent much of the week at Dr. G’s office and he tuned me up.”

Feeling no pain in the Main, Hill started within the top 10, diced the entire race, but just could not make his pass on Suzuki’s Weston Peick stick and had to settle for eighth place.

“I’m not overly happy with tonight, but it’s a step in the right direction after this back injury. I am happy to win the semi and most importantly, I put a smile on my grandpa’s face. Of course when you race for ‘The Greatest Of All Time’ as Ricky Carmichael is known, the bar is set pretty high to start with. Getting up into the top 10 is a good place to build from, so I’ll take an eighth and keep moving forward.”

Despite crashing and consequent concussion-like symptoms, Tickle remains in the series top 10 in points. As a precaution, he went directly to the hospital for evaluation, but the team hopes he will be medically cleared to ride this week.
Said Tickle: “The semi started well, but on the first lap I landed on the tuff blocks and it high-sided me to the right and slammed me hard. It’s all good, I’m okay and just ‘gonna need a couple days to rest.”