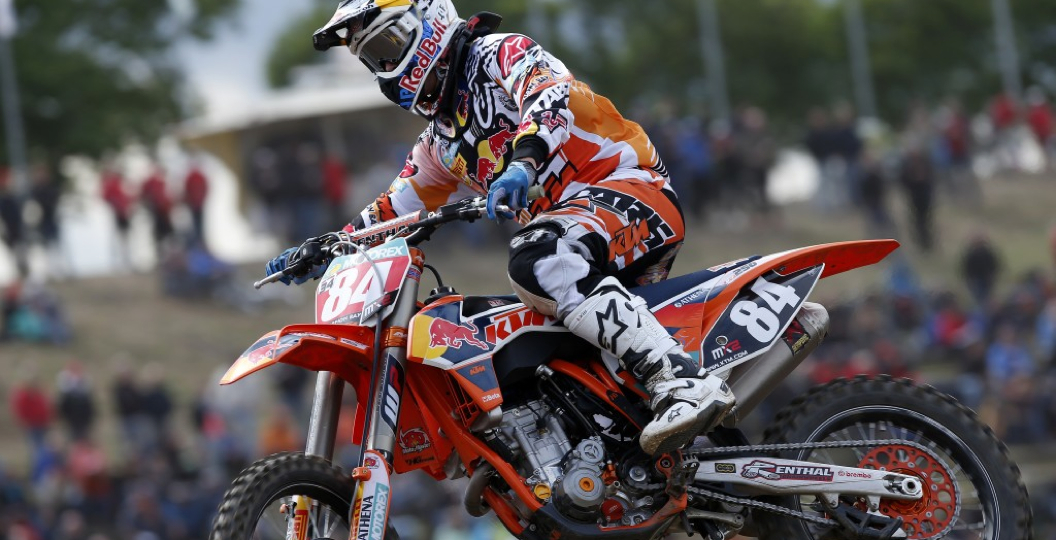 Dutch Red Bull KTM factory rider Jeffrey Herlings once again powered his KTM 250 SX-F to victory at Teutschenthal to claim his tenth MX2 GP win for the season from ten starts in the eleven rounds so far held. It was also his 41st GP career win – a remarkable statistic for the still only 19-year old Herlings.

Red Bull KTM factory rider and teammate Jordi Tixier also had a good day picking up the holeshot in the opening moto and finishing overall third on the day. It was the French rider’s third consecutive podium and an indication that he has once again found his rhythm on the track.

Once again Jeffrey Herlings made short work of a track that is not his natural habitat. He is recognized as perhaps the best sand rider in the world but was completely at home on the hard, slick and stony surface of the German circuit. ??Jeffrey was third at the start in the opening moto but had moved into the lead on his KTM 250 SX-F before the end of the first lap.

In the second moto he took the holeshot and completed yet another seemingly effortless gate-to-flag victory. He now has a stranglehold on the championship with an impressive 105-point lead and seems to be heading for his third MX2 World Championship title. The points advantage also reflects the fact that his closest rival, Arnaud Tonus was unable to ride in Germany because of an injury.

Herlings: “This track never really suited me well but this weekend I showed what I can do. I’ve got some great speed at the moment and I’m feeling comfortable and ready to finish the season strong. It was a really good weekend. We led every lap, also in the practice and I took two good starts.”

Tixier: “I struggled a lot on the track for the first few laps of the first moto and then I had a bad start in the second moto. I was around tenth but I pushed a lot and managed to come back to third. I’ve been working hard the last few weeks and today I was happy with my feeling on the bike and with my riding.”

Cairoli battles illness for fifth overall result
In contrast, it was a tough weekend for Red Bull KTM’s Tony Cairoli, the championship leader in the MXGP class, who battled his way to a commendable fifth place overall on the German circuit, riding ill and under antibiotic treatment.
On Sunday the Italian seven-times World Champion did sacrifice some points to Belgian rider Clement Desalle of France, his closest rival for the 2014 title. Desalle was the overall MXGP winner in Teutschenthal. Nevertheless, throughout the day Cairoli showed his usual fighting spirit and delivered an impressive ride, given the circumstances.

Cairoli, on the KTM 350 SX-F went on the attack with Jeremy van Horebeek for fourth place in the closing stages of the first moto but was unable to make his pass stick. Then in the second moto he was seventh at the start and advanced three places up to fourth at the finish for a 5-4 result and an overall fifth place. Cairoli has a 25-point lead over Desalle and as the competition resumes in two weeks time, he has the chance to recover his health to get back to the battle for the title.

Cairoli said he was ‘really disappointed’ to have been sick, but was still happy with his riding, given the circumstances. “Everything was okay in the first race and I had a good battle with van Horebeek. Then just before the start of the second race I felt very sick. But I was able to finish the race and take some good points for the championship so I am feeling positive about that. I have the feeling we need to step it up a bit for the last part of the season so I will work on my fitness and work hard.”

Meanwhile, Cairoli’s Red Bull KTM Factory Racing teammate Ken de Dycker of Belgium continued to make progress as he fights his way back to full health and fitness after a very long injury break. He wrapped up his weekend at Teutschenthal with a 13-11 result on the KTM 450 SX-F for overall twelfth.

De Dycker said he was a little disappointed not to be able to repeat his top ten finishes that he managed in the last round in Italy but admitted he still needs to build up his confidence after his injury problems. “Physically I feel really good especially after today where I had two motos where I was stronger at the end than at the beginning. Now I just have to believe in myself,” he said after the races.