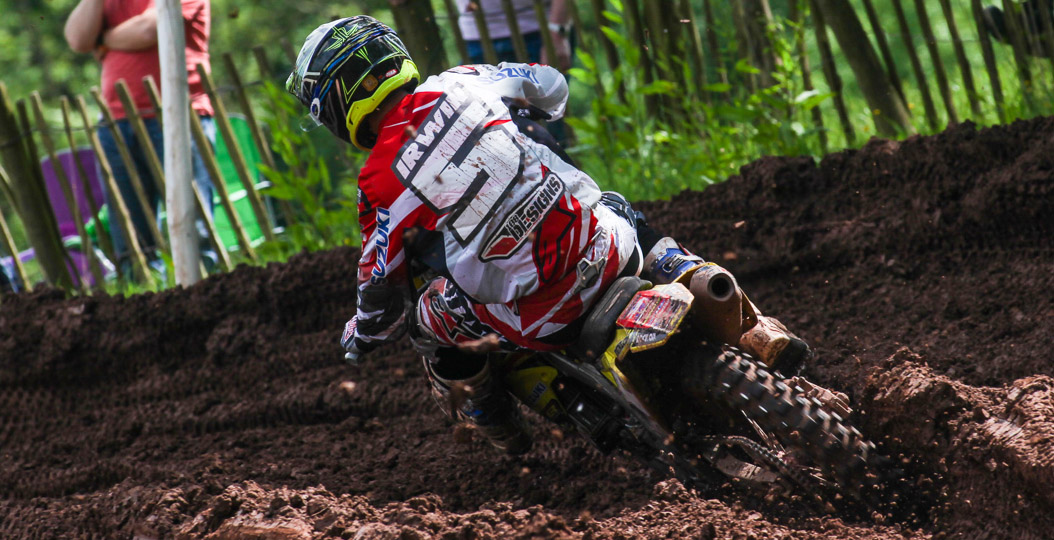 Hit and miss for Irwin and Burton

Pontrilas on the Welsh border in Herefordshire has been the place of quite a few brilliant battles in British motocross, and it was to this track that Heads & All Threads Suzuki returned for the fourth round of the MX Nationals.

The weekend started off very wet and muddy; rains earlier in the week had soaked the prepped track through and through, and qualifying on Saturday morning would be a challenge. Once qualifying started, MX1 rider Graeme Irwin qualified on pole, while MX2 rider Luke Burton ended the session twelfth.

The Pro classes race once on Saturdays and twice on Sundays. On Saturday, Irwin’s race could not have gone any better short of perfect. After a great start, he found himself in third for several laps before making a move on rival Brad Anderson for a perfect run in second for the remainder. The second race on the weekend, on Sunday, got going in much drier and tackier conditions. While Irwin got off the start in third, he found himself unable to make much progress throughout. Whilst in fourth with two laps to go, he made a mistake and went down, handing his position and four others to his rivals and ending eighth. The final race on the weekend was a steady run in sixth after a small slip early on. With the end in sight, Irwin was unable to defend his position from a challenge and had to finish seventh for a sixth place overall on the weekend.

For Burton in the MX2 class, the first race had good beginnings. A start in the top ten got the show on the road, but two crashes in quick succession left Burton stuck at the side of the track with no points. The second race saw Burton mid-pack after the first lap. He soon progressed to thirteenth, where he remained for the majority of the race, before slipping back a couple of places to end in sixteenth. Burton’s final race was over before it really began. Whilst in twelfth, he found himself coming down the big hill section without a rear brake, raising fears of a crash later. The result: zero points for a twentieth place overall.

“The weekend started off well, Graeme was quickest in practice, and in the first race rode strong and finished second. On Sunday he struggled with the track, he had difficulty finding good lines and the track was hard to ride with so many ruts. So overall, it’s not been a great day Sunday.” — Neil Prince, Team Manager

“It was a hard track this weekend. I just didn’t get into it; I haven’t ridden a track like that in a long time! Moto one and two I crashed out, just to get back on the bike and take another crash. In race three I got a mint start, got going and then the back brake failed on me coming down the hill. So I’m now back in the gym looking forward, not back.” — Luke Burton, Pro #40

“I rode good on Saturday, but on Sunday I rode like a complete amateur. I’m very disappointed in how things went.” — Graeme Irwin, Pro #5