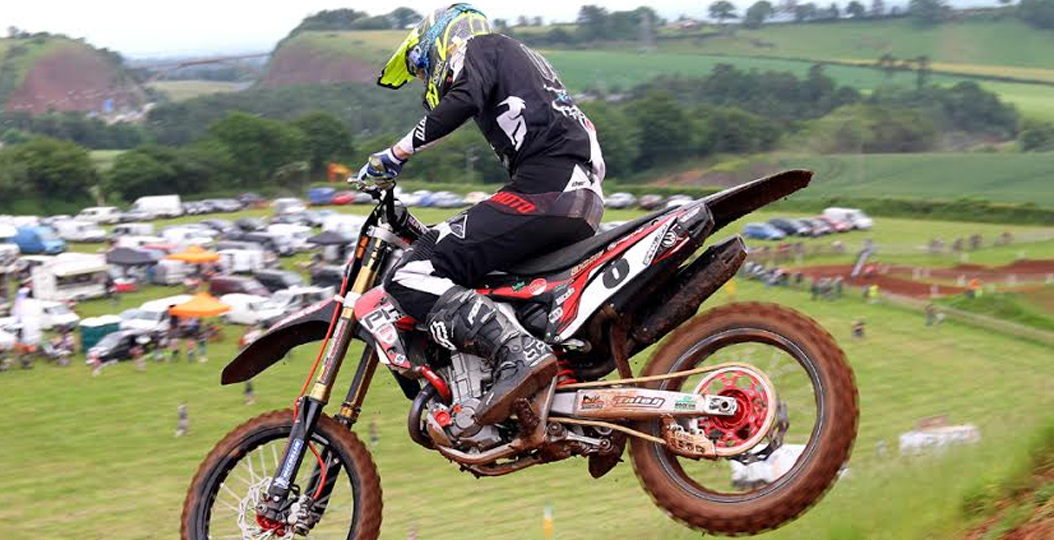 Last Sunday the Phoenix Tools Premier Motocross Championship resumed with round 4 in the series at Little Silver Moto Parc, Exeter and was to produce yet again some excellent racing in front of a moderate crowd. The track as usual had been prepped and water had to be put down as things were to become a bit dusty as the day progressed.

In the Phoenix Tools Expert Open class there was some really good tussles in all three races which was to produce three different winners, it was Alex Snow on the Phoenix Tools Rocket Honda who had set the fastest time in qualifying, but it was Championship leader Luke Hawkins also on a Rocket Honda who had the best start in the opening race from the St Blazey Husqvarna of John May with Jake Shipton on the Strudwicks/Crescent Racing KTM UK tucked in 3rd just ahead of Snow who was soon pressing. Both Snow and Shipton got the better of May on the opening lap and were closing in on Hawkins. Shipton was breathing all over Hawkins on lap 3 and eventually found away pass, but it wasn’t such a good lap for Snow as he went down when his front wheel went away and his bike stalled and it wouldn’t start which was to end his race. Shipton however was in fast mode at the front and was getting away all the time as was James Dodd on the TwoNineTwo/APS/Factory Touch Honda who was lapping at some speed and was to have a real tussle mid race with May with Dodd eventually getting pass, but he wasn’t going to catch neither Hawkins nor Shipton who took a convincing win. In moto 2 this time it was Dodd with the best start from Snow who was out on his spare bike just a head of May who took Snow on the opening lap, but not the best of starts for race one winner Shipton who got forced wide at the first corner and was right at the back of the field. May was to get the better of Dodd before the end of the opening lap as did Snow and Hawkins who were having there own little battle with Hawkins finding away pass Snow on lap 3, then a lap later was to catch and pass May to take the lead. Snow was also to get pass May mid race, but by this time Hawkins had a fair lead. Shipton meanwhile was powering his way up through the field and was soon to catch and pass May on lap 6 and was in to 3rd, but it was Hawkins who took the chequered flag even though his bike was steaming from Snow with Shipton taking an excellent 3rd after his first corner spill. The last moto had to be red flagged after 9 minutes and it was rerun and this time it was Snow who made the best start from team mate Hawkins who was out on his spare bike after his head gasket had gone on his race bike, Shipton again didn’t have the best of starts and was well down. Jamie Skuse on the Tony Maunders Racing Suzuki was in 3rd, but not for long as he was to go down on lap 2 and up in to 3rd came May who was to have a nail biting battle for several laps with Kelvin Townsend and Dodd. Snow was trying his all at the front to shake off Hawkins who was to stick with him like glue and these two were to power away at some rate, but all eyes were on Dodd who was literally using every inch of the track to get himself up in to 3rd which he did 4 laps from the end, but he wasn’t going to catch the leading two with Snow taking the win with Hawkins a close 2nd which was enough for Hawkins to increase his Championship lead to 71 points over Snow with 6 rounds remaining.

In the Over 35 Championship class there was great drama in the opening race as the Gibbs Performance/St Blazey Yamaha of Championship leader Nick Life had a blistering start up in to the first corner, but he had a bit to much speed and his front wheel washed out and he was to hit the deck, and by the time he remounted he was right at the back of the field, but this didn’t deture Nick as he was soon in to catch up mode. Keith Hanson on the Hansons Garage Honda was the early leader and led for the first lap, but up in to 2nd and soon breathing all over Hanson on lap 2 was now Life who was to take over the lead passing Hanson down one of the steep hills and from there Life eased away to a well earned win. Moto 2 saw Life make no mistakes at the first corner this time with the holeshot and with a clear track he was to notch up yet another win. There was a good battle for 2nd in this one as Hanson had to be on his guard as Jamie Deadman on the Gibbs Performance KTM was all over him for much of the race looking to take 2nd, but in the end Hanson held his nerve to take that 2nd spot. In the last race there was a few fallers at the first corner, but not Life as he stayed well clear and hit the front from the off and was to go on untroubled to make it a hat trick of wins with Hanson also taking 2nd again to make it a hat trick of 2nd place finishes.

In the Over 40 Championship class the battle for the overall took place in all three races, but in the end after some hard tussles with each other it was Chris Brown on the TwoNineTwo/Factory Touch Honda who notched up 2 wins to Steve Locke’s one win on the S J Hodder Honda, where as in the Over 50’s there was a win for Championship leader Mark Gleadhill in the opening race, but a problem with the bike saw Mark miss race 2 which saw Steve Chugg take the chequered flag, but Gleadhill was back for race 3 where he took the win.

In the Tyremarks Junior Championship class there was some of the best racing seen this year in the Championship. In the opening race it was Rocky Letherby on the Hansons Garage Honda who led early before taking a tumble which was to let Olly Jones on the Bob Jones Heating KTM take over the lead, but he was pushed all the way by Championship leader Jack Stevens on the D S C Kawasaki who finished a close 2nd. In the second moto there was no messing from Stevens once he hit the front as he went on to take a comfortable win from Toby Harvey and Rick Hanson who had there own little battle late on. The last moto was the best race of the day with places swopping all the time. Josh Turner led early on before Hanson took over then Jones took the lead 3 laps from the end, but up in to 2nd as they started the last lap was now Stevens and he was soon to pass Jones to take the lead, but Jones fought back and regained it until the whoops section where Stevens took the lead again and literally held on to take the chequered flag to much applause.