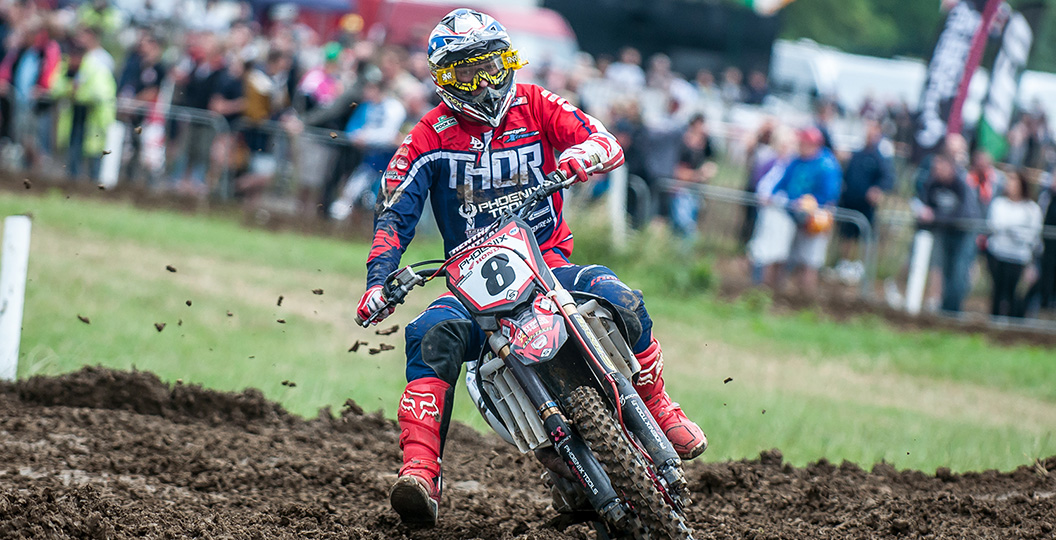 Back on  Sunday 13th July the Phoenix Tools Premier Motocross Championship made its way back in to Wiltshire to Grittenham Moto Parc, Nr Royal Wootton Bassett for round 6 in the 10 round series. The track had been prepped nigh on to perfection and with mother nature coming in overnight to help and a couple of showers during the day it was to produce some high quality racing.

In the Phoenix Tools Expert Open class it was Alex Snow on the Phoenix Tools Rocket Honda who had set the fastest time in qualifying and had first pick of the gate, but this advantage was soon lost in the opening race as Snow got too much grip when the gate dropped and his front wheel lifted and he had to ease off the throttle and ended up mid pack going in to the first corner. Championship leader Luke Hawkins also on a Phoenix Tools Rocket Honda had the holeshot from the TwoNineTwo / Factory Touch / St Blazey Honda of James Dodd and Luke Dean on the Meredith Mx Suzuki. Hawkins was in a real hurry at the front and was to power away on the opening lap, the St Blazey Husqvarna of John May was now in 3rd having got the better of Dean and was soon to have Snow breathing all over him. Snow and May had a real tussle for a couple of laps before a slight mistake from May saw Snow go through who was soon to catch Dodd and was pressing for 2nd which he took on lap 5. Snow did close on Hawkins in the closing stages, but the deficit was too great and Hawkins took the win from Snow with Jamie Skuse on the Tony Maunders Racing Suzuki coming on strong in the latter part of the race to take 3rd.

In the second moto again it was Hawkins with the holeshot from the Oakleaf Kawasaki of Luke Mellows and Dean with Snow yet again with not the best of starts back in 10th. Hawkins really had the throttle wound back in this one and literally left the rest to battle it out as by the end of the opening lap he had a 3 second lead. Skuse was to get the better of Dean and Mellows in the early part of the race to move up in to 2nd with Kelvin Townsend following him through up in to 3rd. Snow was making good progress until he came up behind Dodd mid race who just wouldn’t give up his place and this turned in to a battle royal with virtually nothing between them. Hawkins was well gone at the front and was to take the chequered flag with Skuse a comfortable 2nd, but all eyes were on Dodd and Snow who were now up in to 3rd and 4th as they went in to the last lap. Snow really piled the pressure on Dodd desperate to get pass which he eventually did just 4 corners from the end when he slipped through on a fast right hander and got the inside line at the next corner to take 3rd.

In the last race this time there was no mishaps from Snow who kept out of trouble and took the holeshot from May with Hawkins there in 3rd. Snow was flying at the front but keeping with him was May who was thrilling the many spectators with some close racing for several laps until a slight mistake from May on lap 8 saw him drop back in to the clutches of Hawkins who didn’t take long to get pass, but he wasn’t going to catch Snow who took the win with May coming home a close 3rd.

In the Over 35 Championship class again there were many wildcard entries, but there was no stopping Championship leader Nick Life on the Gibbs Performance Yamaha. Just before the opening race the heavens were to open which made things a bit slippery to begin with, but that didn’t deture Championship leader Life who the holeshot and was soon on his way, but a rare mistake on the opening lap from Life saw him slip off and through into the lead came the Gibbs Performance KTM of Jamie Deadman, but this lead was short lived as Life had refocused and was to regain the lead and from there went on to take the win. In the second and 3rd Moto’s Life had the hole shots in both races and with a clear track in front of him was to storm away to the chequered flag untroubled to take yet another hat trick of wins to increase his Championship lead.

In the Tyremarks Junior Championship class it proved a good day for Championship leader Jack Stevens on the D S C Kawasaki even though he didn’t win any races, he was pretty consistant and was to take maximum points as leading registered rider. There were many wildcard entries including a welcome return to racing for Jordan Carter on the Stones Supplies Suzuki who showed his class in the opening 2 races, but in the last race it was Lewis Dowdeswell that was to denie Carter the hat trick of wins.