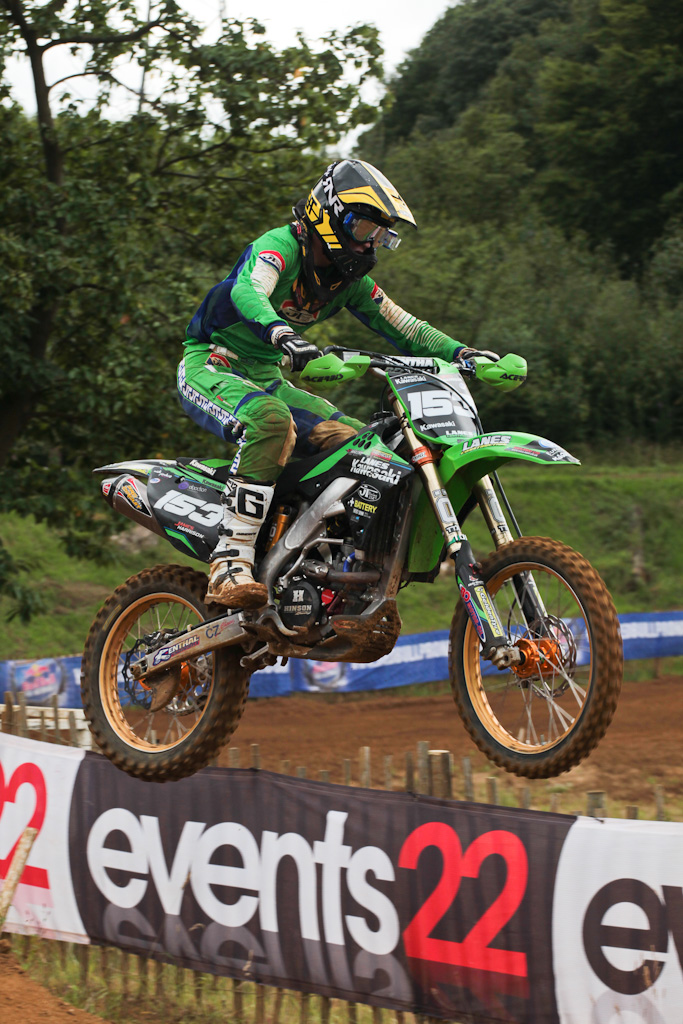 Lanes Kawasaki has seen some turbulent times recently and it is with regret that the team had to say goodbye to Sunny Thompson at the beginning of the weekend. With MX1 rider Alfie Smith performing his world championship duties in the Czech Republic, the role as flag bearer for the team fell to Elite Cup Rookie rider James Harrison at the fifth round of the Red Bull Pro Nationals championship. And bearing the flag Harrison did with style and a win at the end of the weekend.

On Saturday morning, the qualifying session saw Harrison put in the second-fastest time, putting him in prime position to make the best of the start. Although off the first race start in fourth, a small slip cost Harrison precious time and two positions, but the rider nonetheless recovered enough places to end where he started. The second race went off much smoother. This time, Harrison found himself in second soon after the start, but was not quite able to close the distance between himself and leader Ben Watson, taking second in the process. The third race on Saturday was, in short, perfect; leading from start to finish, Harrison showed his true potential.

Building on the success of the day previous, Harrison again took the win in the first Sunday race after taking on and beating rivals Watson, Thornhill and Divall. The final race did not quite go as planned after an extended downpour thoroughly drenched the track, but Harrison negotiated the slippery surface in front of him for eight laps without incident, taking fourth place on the finish line and climbing to the top step of the podium at the end of the day.

Although team principal Dean Lane was not present, Dennis Lane stood in and commented at the end of the day: “This weekend’s been good, very good. The youngster held the team together! We’re very pleased and very proud.”

James Harrison (#153): It was good all weekend really. The track was dry for four out of five races and I felt good in them. I got a fourth in the first race, because I crashed in that, then I got a second and won the next two which I was happy with, and had the fastest lap time, and then before our last one it rained hard and the track was really sketchy and I just tried to survive it and bring it home. I managed to get fourth, and was on top of the podium which I’m really happy with.