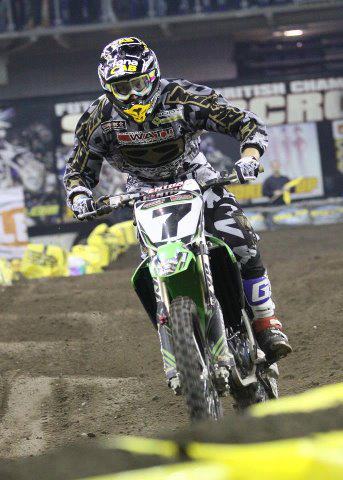 GP winner, world championship bronze medallist, multiple British champion – Gordon Crockard will be bringing a wealth of experience to the New Year’s Arenacross series, not to mention a huge heap of home support when the championship touches down in Belfast for round two.

The Crock Star, the Pride of Ulster, Ginge – call him what you like, the 33-year-old from Newtownards has an impeccable reputation indoors and out and agreed to race the full series for LPE Kawasaki as far back as October.

AX: How much do you enjoy racing indoors and how does it compare to racing outdoors?
GC: “I love the concept of racing indoors, especially during the winter when the weather is dung. In comparison to racing outdoors, the same skills are required to be a winner, however I do think you will find some riders excel at Arenacross more so than Motocross and it’s got a lot to do with their self-belief, ego and confidence in my opinion.

“In Arenacross you see the dudes with their chests out in practice giving it the big ’un and thinking they’re top dog because they’re making all the jumps and clutching the death out of the bike in the skid berms, then in Motocross you see them trying to negotiate a rutted downhill off-camber and they’re struggling round it like my Aunt Aggie would. For me it all comes down to the track in terms of how much I enjoy it and that is the same for racing indoors or outdoors.”

AX: You may be approaching elder statesman status and not quite as effective outdoors as you once were but indoors you’re a real threat every time you line up. Discuss…
GC: “Outdoors racing is something where I’m less enthusiastic today as I was 16 years ago when I first started racing professionally in the world and British championships and I have a lot more energy and motivation for riding indoor events. I love the challenge of a new track and I have to tell you, I’m bored to death of the current tracks used in the UK for outdoor racing. Every indoor track is constructed new, obviously, so therefore I find it interesting to learn it and race it.

“I think from my experiences racing indoors around the world and also competing in the Australian series last winter on their AMA-spec tracks I have added a few skills to my ability that are specific to racing Arenacross.”

AX: You sound like you’re bang up for it…
GC: “I intend to challenge for the title. The timing of the series is inconvenient for me as I will be running my Crockstar Winter Training camps in Spain during the months of January, February and March and I will have to commute from Spain.”

AX: How well do you know your AX team-mate Steven Clarke and, more importantly, can you beat him?
GC: “For what my opinion is worth I think Steven Clarke is fast. He can win. He excels in Arenacross forms of riding. But saying all that means nothing as I think the same for many of the riders who I have to compete against. I can beat him, yeah. I watched Steven race the Australian series in the Lites class as I was in the 450 class and I have 100 per cent respect him for how he rode those tracks. The guy has skills.”

AX: How much of a boost will the Belfast crowd be?
GC: “I love Belfast people. The majority of the crowd want to see a local man run at the front and defeat any visiting overseas challengers. If that scenario takes place then the crowd embrace you and take great pride in your success as if it were their own just because we both share similar postcodes. They adopt you and take a view that together you and them are on a crusade against the rest of the world and any victory is an opportunity to throw up the two-finger salute and ask ‘how do you like them apples?’ so, if you’re winning or close to winning, then the boost is huge.”

AX: Are you going to be hitting the triple every lap?
GC: “Every lap, even the first one of practice and the opening ceremony lap in the dark!”

AX: Are you doing any AX specific training? Intensive dancing perhaps?
GC: “Arenacross is intense and it’s a requirement to be in phenomenal physical condition if you want to win. Fortunately, I’m a Crockard so I don’t need to train – similar science to only fat people needing to diet.”

For more info on the Arenacross Championship and to buy tickets click here: http://www.arenacrossuk.com/