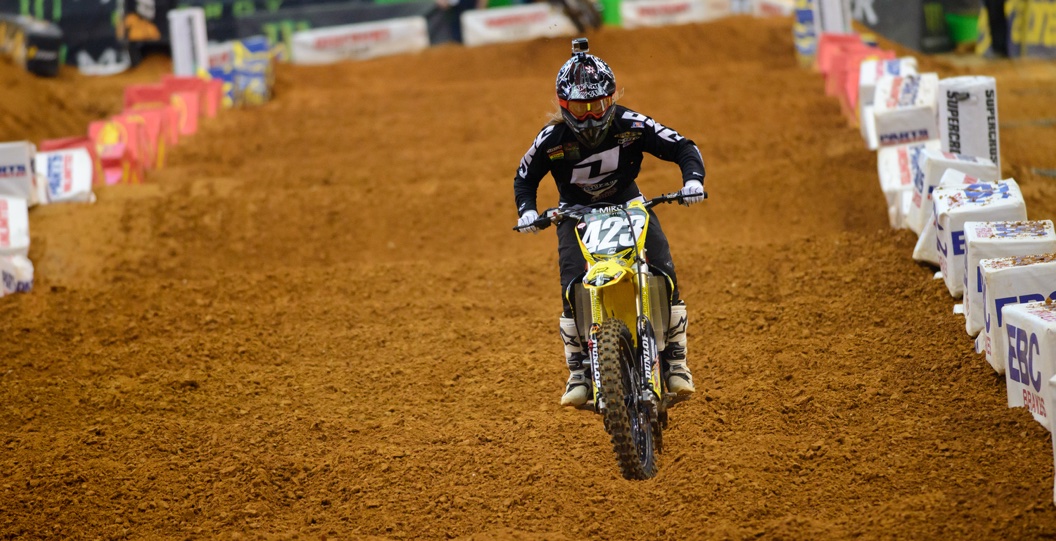 KENNESAW, GA – Team MicroBilt/PRBC Suzuki is proud to announce its 2016 Monster Energy AMA Supercross lineup for the upcoming season with popular riders Ronnie Stewart and Vicki Golden joining the squad. Stewart raced for Team MicroBilt/PRBC during the 2015 outdoor season and Golden is new to the team for 2016.

Stewart, a 25-year-old native of Easton, Pennsylvania, made a name for himself in the sport over the last few years, rising to be among the ranks of the best riders in the Northeast, before moving into the pro ranks. His hard work and determination has resulted in Stewart becoming a regular qualifier in the premier supercross class over the last couple of seasons.

“I’m happy to be a part of Team MicroBilt/PRBC again for 2016,” Stewart said. “I’m working hard to come back stronger than ever and hopefully I can make a solid charge during the second half of the season. It’s an honor to have Vicki part of the program too. Bringing her on board will shine a brighter spotlight on our team, which is great for our sponsors.”

Stewart is currently injured, having broken his wrist in a pre-season practice crash in mid-December, and will miss a number of supercross rounds during his rehab. MicroBilt/PRBC Suzuki is currently reviewing options to possibly enter a fill-in rider for Stewart as he makes his recovery.

Golden, 23, of San Diego, was one of the big stories of last year’s supercross season and is best known for making history in Las Vegas last May by becoming the first female in more than four decades of Monster Energy AMA Supercross, an FIM World Championship, to qualify for the “Fast 40” – the riders that transition to the night program from timed qualifying in the 250 Supercross class.

Her groundbreaking achievement was part of a series of her firsts for the sport, which also includes becoming the first female in history to complete Ricky Carmichael’s Road to Supercross in AMSOIL Arenacross, earning her pro Supercross racing license. In 2011 Golden became the first female to qualify for an AMSOIL Arenacross Lites Class Main Event. This year with backing from MicroBilt/PRBC Suzuki she will once again attempt to make history by becoming the first female to qualify for a 22-rider 250SX Class Main Event. She will race in the East Region, but will be attending all rounds of the 2016 Supercross season to be able to meet with fans and the media.

“I think the MicroBilt/PRBC team is going to be a really good fit for me,” Golden said. “It will be great to have more support. The team is on point and is willing to give me whatever I need to try to be successful. Last year I was kinda on my own and it was so difficult to handle so many of the team issues myself in addition to riding, I’m really happy to have this kind of support on my side. It will also be a big plus to have Ronnie as a teammate and mentor to help teach me the ropes. He’s got several seasons of experience and I’m eager to learn from him.”

This will be the first Supercross season for MicroBilt/PRBC Suzuki. The team will race the outdoor nationals as well.

About MicroBilt: MicroBilt is the single source and preferred provider of decision critical information for over 35 years that responsibly assists businesses in reducing risk and managing their business. MicroBilt offers the business owner simple, cost-effective solutions and a wide selection of data products for fraud prevention, consumer financing, debt collection and background screening.

About PRBC: PRBC is the world’s largest non-traditional credit bureau and allows users to prove their financial responsibility and gives members credit for their utilities, phone/cable, rent, insurance and other bills. The payment histories for these are utilized to create a free PRBC Score.