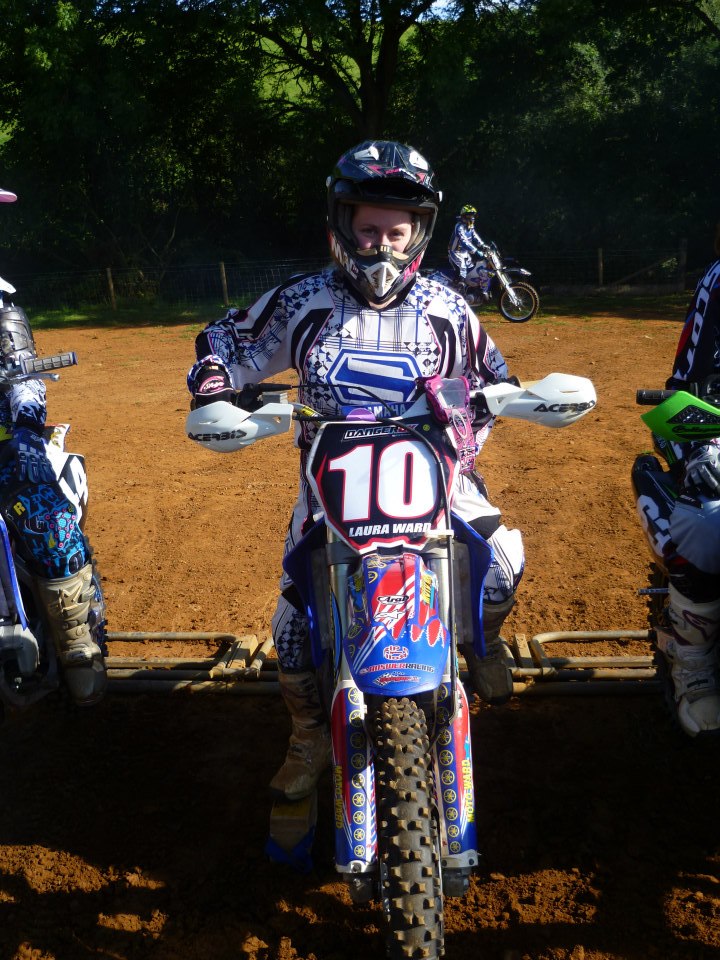 It was a weekend all about the girls. Hucklebridge Events put of a fantastic event, one that they can take great pride in. The girls were made to feel special on every level with excellent facilities, track prepped to perfection, top-notch organisation and trophies to match.

There were some outstanding riders throughout the weekend and it was a pleasure to speak to parents and riders about women’s Motocross in the UK. It certainly meant a lot to have there own event racing against girls rather than having to battle with the boys. One thing that impressed MX Vice was the friendliness and atmosphere of the meeting, families getting together competitors hanging out after tough races in the heat, the MX community is strong.

Our respect for female Motocrossers went through the roof at the weekend when you hear that Laura Ward in the AMX, gave birth only 5 months ago to her baby girl and got back on a bike for the first time in a year at Wroxton! Laura handed Millie over to dad and grandad and rode to 17th overall.  How many guys can say they could do that? Well none I know because there is no chance of guys giving birth, but Laura is just one of many girls that use the event to get back on the bike.

The Autos and Juniors raced together over the two days that included six races with five of them counting towards the overall result.  In the Auto group Chloe Allison took five race wins to convincingly win overall and become the UK Girls National Champion. A very consistent runner up was Tegan Leigh Bonwick who battled around the dry track. Third place overall went to Isabelle Maynard with Chloe Easters and Maddie Philpott putting in some great effort to complete fourth and fifth places.

The junior riders really showed that they had gained some track experience as they were jumping the same big table tops as the adult bikes. Ciara Robertson was the overall winner taking a great five out of six wins. Taking advantage of Ciara’s runner up finish in one race was Bethany Allison who fought hard to finish second overall. With a little mixed fortune Katie Booth managed to keep her head to gain enough points to finish third overall. Rebecca Newham finished fourth with Kiah Cullum fifth and Esme King sixth.

The BW85 and SW85 group also raced together producing some immense racing with almost thirty riders in the mixed group. In the Small Wheel Group Lucy Calvert did not put a foot wrong and was unbeatable to take the top spot. Katherine Booth was super consistent and took second place ahead of an ever trying Leonni Tighe and Molly Wernham in fourth and fifth.

The style and speed of the Big Wheel winner Lauren Collingwood was admired by many throughout the weekend including MX Vice,  Nadiya Hussain Chassed Lauren and managed to hold on to second place overall. Hannah Murray was consistent with a great third place finish in her last race to finally finish third overall. Fourth overall was a supper smooth Kanela Whitehead chased closely on day one by Rhianne Baker who finished fifth. Tara McLeod finished sixth even after suffering two DNF’s; Tara made up the rest of her races with second places and a win in her fifth race.

With a large group of rider in the Seniors Beth Farmer rode extremely well, never out of the top three to take the overall win. Kayleigh Durston added a win in race four to her point’s accumulation to gain second position. Third place overall went to Billie Dunlop who also took a win in race three followed by a couple of third places. Danni Marsh got better as the weekend progressed ending on a high of two wins to take fourth overall. Fifth place was awarded to Ellie Caine’s followed by Catherine King in sixth place.

Once she had overcome her first poor race result Amie Goodlad was the one to beat in the AMX class with five wins to take top spot. Vickie Parking was well on the pace for most of the races to take second ahead of Sarah Collins in third. Anna Marie Ardren worked had to gain fourth overall ahead of Charlie Ryall in fifth and Vicky Marriott in sixth.

The final women’s only group saw the bigger bikes of the Open group challenge the hard packed track, Louise Powell was very convincing even after a few problems and managed to take the overall victory. Andrea Merrett put the pain of a bad ankle behind her to finish second ahead of Emily Jones in third, Emily Davey and fourth and Danielle Miller in Fifth.

Even though the event is to support girls racing in mx we would like to thank the 50 plus man for supporting this event, because of their support we were able to race on such a fantastic track once again.

Photos can be found on Muddy Chick Photography’s Facebook  page.

Full results can be viewed at the Motocross page on www.hucklebridgeeventsltd.com