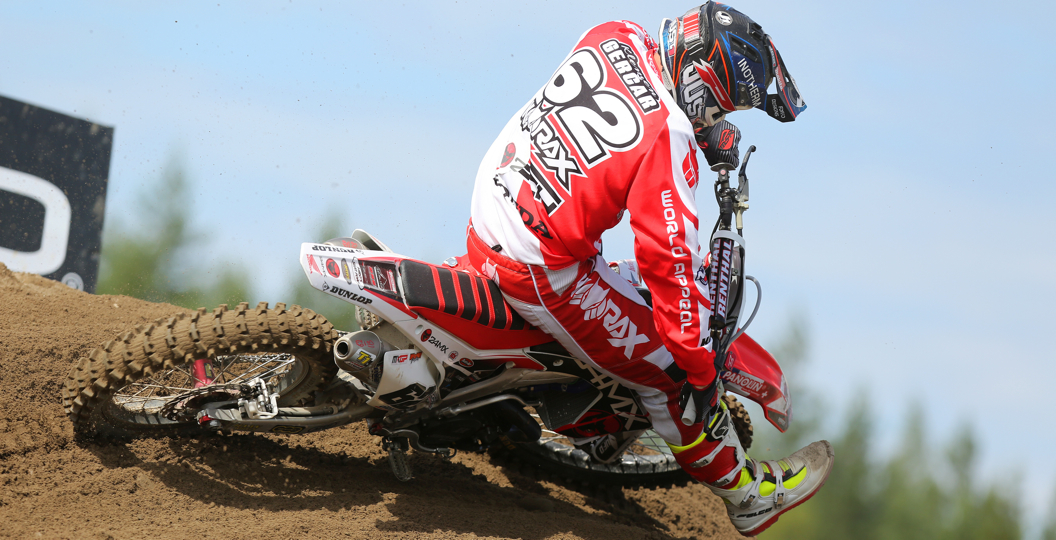 Gercar salvages one point in Finland

Sunday 13 July, 2014 — The thirteenth round of seventeen in the series saw Antonio Cairoli win the premier class ahead of Frossard and Strijbos. MX3 World champion Klemen Gercar found it hard to reach his best level on the bumpy and sandy Hyvinkää track but he managed to bring home one point.

After the Swedish GP last weekend, Hyvinkää was the second leg of MXGP’s Scandinavian visit. Although the terrain was largely flat, the Finnish Grand Prix provided riders with a physical and technical test due to the loose soil and rippling bumps.

Klemen had a decent start to his weekend. He guided his 24MX Honda CRF450R to 17th in free practice and rode to 18th in the yesterday’s qualifying moto. Unfortunately Gercar was plagued by two bad starts. Still he slotted into 20th in Sunday’s first moto. With 21st place in the second race, the 23-year old Slovenian, failed to score additional world championship points. In provisional MXGP World standings Klemen currently sits in 29th position.

In two weeks time the Grand Prix of Czech Republic will take place at the traditional stony hard-pack circuit of Loket.

Klemen Gercar: “It was not the best GP for me. But I knew before that it would be tough because personally I find that Hyvinkää is one of the most difficult tracks of the season. In the first moto, I struggled for the first three laps than I got into the rythm. In the second race I really felt that I haven’t been riding in the sand lately and my speed was just not good enough. The bike was good, we all worked hard this weekend, only sometimes it just doesnt’t work out the way you planned. I’m really looking forward to Loket though. It’s a track that suits me a lot more. The Czech Grand Prix is also the GP that’s closest to Slovenia so it’s my home race as well!”