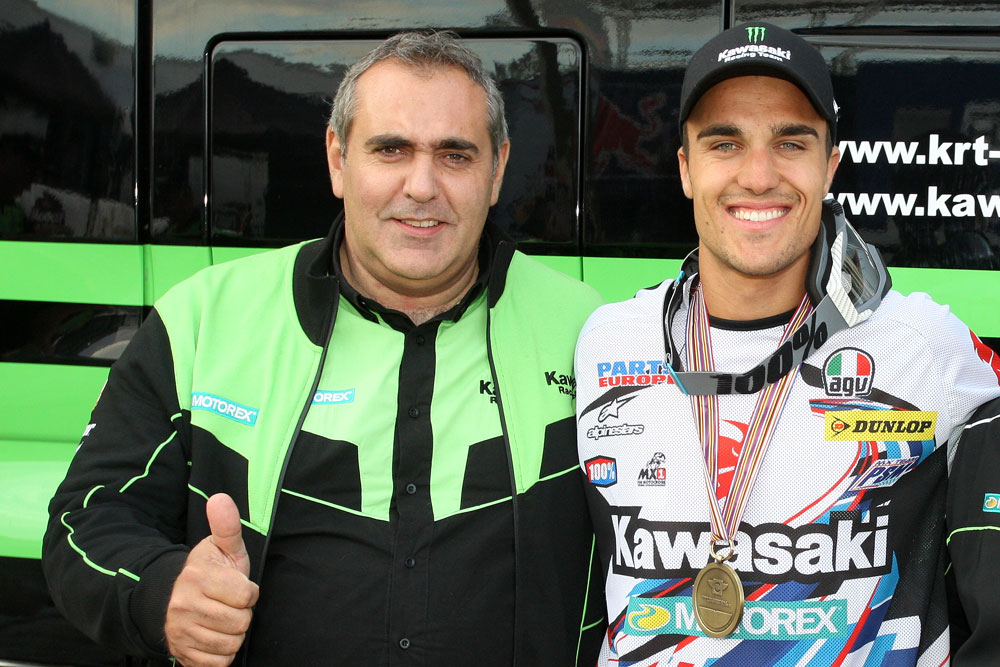 I really enjoyed this winter break, as I was injury free I have renewed my contract with KRT – it’s the best way to prepare for the next season when you continue to work with the same people. It is also a good opportunity to race some Winter Supercross events! We spent a couple of days in October testing many parts that the factory sent us from Japan and as everything went as expected I got the ‘green light’ from my team to race some SX. I really love racing Supercross, but I haven’t raced any in quite a while – last Winter I moved to Kawasaki and was too busy to learning about my new bike, my new team and to prepare my first season in the MX1 class. This year however the situation was different and the team understood my whishes, so they let me race some events. They knew that I would not take too many risks, and that’s what I did in Genoa and Geneva. Practicing or racing Supercross has always been a pleasure for me and I love whoops or technical sections. I had loads of fun, even if I didn’t go over my limits. I know that all the team managers are afraid as it could be dangerous racing SX, but the most dangerous part on a Supercross track are the other riders. I know how important the World Championship is for the KRT team, so I raced carefully and did my job with a podium at each event. I would have liked to race Bercy, as it is an important race that I love and where the fans are incredible. Last year I couldn’t go as I just moved to my new team however this year I was ready to go but the promoters had other priorities. I was disappointed for the fans and it’s unfortunate that riders don’t get dealt a fair hand so let’s hope that I will be there next year!

I started my physical training again in December, first at home and then in the mountains. I went to Switzerland, before moving to La Clusaz later to join Didier Rochette and some other athletes. Xavier Boog and Arnaud Tonus go there each Winter and they let me share this experience so we worked in a really good atmosphere. We had a great support from the station of La Clusaz and even if the weather was not always nice we worked hard. For the first time I did some ski cross-country – it’s different than cycling and that’s great to work and discover new sports. The program was intense, but we did everything with a good spirit, alongside two riders that I appreciate and who share the same passions as I do.

Since then I have never stopped working as the first races will start very soon in a few weeks! I will for sure be in Mantova on January 27th and in Valence on February 17th, and have just received confirmation from Hawkstone Park so we will also be there on the 9-10 Feb in England. But for sure I will spend some time with the team in the Netherlands and Belgium in early January, as we need to get some bike time before these races.

This year the first Grand Prix will be in Qatar and it will be an amazing experience to race there and then in Thailand! That’s great for the World Championship racing at these destinations as they gain more credibility with such events. Our sport has grownup, has a good image and the fans all over the world are able to experience GP motocross. This year we’ll have a new schedule for these GP’s as the MX1 and MX2 riders will race together. I think that it’s a good idea for the oversea events as we’ll have forty good riders behind the gate. For sure we’ll have less races on television but with the time difference I’m not sure that so many people would have watched all the races at that time of night anyway? As I say it’s a good idea for these four oversea GP’s but we must not kill the MX2 category, which already had to deal with the age limit. I think it will be tough for the spectators who are new to our sport on television, to understand that the rider who finishes sixth overall is actually the MX2 winner! It’s going to be interesting to test the experience this yea but then it will be important to talk with the riders and the teams before taking any decision for the future.

I’m confident coming into this new season. 2012 was a learning year for me with a new bike, a new class, new team and new rivals, and we added a nice page to the history of the team as we battled for GP wins and brought back Kawasaki to the podium. I know my team inside out now – how everyone works and the KX 450 F-SR has no more secrets for me. I’m very excited and can’t wait be behind starting gate again. I know that I will feel the adrenaline and once more I will do my best to reach my goals. I wish you a great 2013-year and hope to see many of you on the track and thanks again for your support!