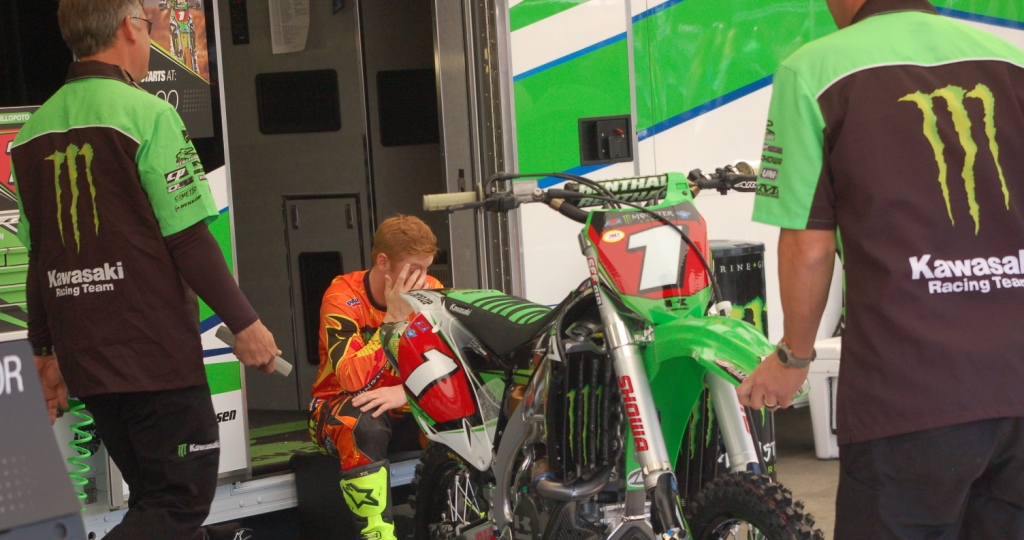 Gary Semics is a former AMA supercross and motocross rider who even raced some GPs back in his day!

But the American is more recently famous for being Jeremy McGrath’s coach in the mid-90s, helping guide the best supercross rider ever to 7 supercross titles and the 1996 250 Outdoor championship.

Semics has continued his coaching and still runs a very successful riding school today along with making riding videos that have helped riders at every level.

During these schools Semics also had the opportunity to coach Ryan Villopoto. The then young Kawasaki schoolboy hopeful took Semics’ words of wisdom to heart and has went on to win four supercross titles in a row.

McGrath and Villopoto are currently the only two riders in history to win four supercross titles on the bounce. So we thought Gary Semics was the ideal man to talk to about both riders and compare their abilities as well as find out just what made both of them such great champions.

MX Vice: How did you end up working with the King of Supercross, Jeremy McGrath?

GS: In 1987 I was still living in SoCal. A free lancer for Cycle News and some of the magazines (David Proceda) asked if I’d do a free private lesson for a young prodigy named Jeremy McGrath (then 16). David said he would do a story and present it to Cycle News. The story never got published but Jeremy and I did!

MX Vice: What were Jeremy’s strengths and weaknesses when you began working with him? How do you feel you helped improve him?

GS: Jeremy’s strengths were talent, desire to win, he loved to ride, and had strong mentally. But at first he didn’t like to train off the bike. He also needed to improve and actually learn some new riding techniques. He had to improve his diet, big time.  What dethroned him was becoming over confident and he misjudged RC when Ricky beat him.

MX Vice: What was Jeremy like to work with?

GS: Jeremy was great to work with. He was generous, grateful, coachable and most always in a good mood. He had a way of keeping things light (not take things too seriously) and more fun than just doing the hard times each and every week. We did the hard times but it was more enjoyable with Jeremy.

MX Vice: What were Ryan’s Strength and weaknesses when you coached him?

GS: It’s impossible for me to compare RV and MC because of their different ages when I was training them. But I can tell you they shared similar characteristics. Like they both loved to ride, both really wanted to win and were willing to do what it would take to do it. Ryan was just 13 and 14 when I was training him but I can tell you some of Ryan’s strengths were: Talent (not as much as MC but still a lot of talent for sure), work ethic (Ryan would practice hard a lot and I mean a lot – Kawi would give him 16 85s per year) and he was coachable.  But he did have to learn to set up his bike better.

He also had to learn some new (to him) techniques. The one that stands out in my mind is using the rear brake until he starts using the clutch and throttle to exit a corner. At first Ryan would have a gap between the two. It only took him a few minutes to learn the technique. I’ve noticed he still uses that technique today. I’d say he has really perfected it. Just watch him swing the rear end in and out of a bowl corner!

MX Vice: Did you think Ryan had the potential to win four supercross titles in a row like Jeremy?

GS: I did after he won three. I still remember the first time I saw Ryan riding. It was a Team Green practice day at The Reddick Track in OcalaFL just before the Mini Os. Ryan must have just turned 13. As soon as I saw him riding (85) I recognized talent and potential. Shortly after that I was training him.  I still remember the straightaway he was coming down into the braking bumps. I recognized it instantly.

MX Vice: The way they ride seems quite opposite, is that the evolution of the sport or could Jeremy’s smooth, calculated style still be winning today?

GS: I think if Jeremy was in his prime today he would still be winning. Maybe not total domination and winning quite as many races but winning championships, for sure. Ryan rides more aggressive but he is still a pretty smooth rider, at least when he has a comfortable lead. He was extremely smooth when he won the final this year in Vegas with an over 5 second lead.

MX Vice: You have coached amateur and title wining pro riders from two stroke days to four strokes, have four strokes forced you to alter how you coach riders even at the professional level?

GS: No, not at all. The weekly preparation during the week is the same. Even the riding techniques are very much the same. The importance of being more precise with the clutch and throttle and with the front and rear brakes is a little more important on a 2 stroke but it’s all pretty much the same.

MX Vice: When you watch the races do you still analyse the riders from a technique point of view and what do you see the top guys could improve on? Or is it more mental strength that seperate the top few guys?

GS: I can’t help but to notice technique and riding styles.  The top few guys all know how to ride the bike with the proper techniques. What separates them is mental,  monthly preparation methods and bike set up. The guys you don’t see because they didn’t make the night program are the guys who could benefit from improving techniques and then of course the same as mentioned above.

MX Vice: What does a guy like Ryan Dungey need to do to re-establish himself as the main guy in the USA

GS: I think RD needs to change something in his mind-set and preparation but I don’t know what that is because I don’t know what’s he’s doing now and how much confidence he has in himself. I would like to spend a few weeks with him and see if there’s anything I could help him with. Do you think you can set that up for me? Ha ha!

MX Vice: Who will be the next dominant rider in the US after RV? A Ken Roczen or Eli Tomac? Or will a Cooper Webb or Adam Cianciarulo step up?

GS: Those are all good possibilities. I would say Roczen or Cianciarulo have the best chances. But it’s hard to say how they will develop mentally as they continue to mature. And the mental development (barring any serious injuries) will be the key question mark with all the riders you mentioned.

MX Vice: Who do you think would win the supercross title in their prime if they raced in the same era – Jeremy or Ryan?

GS: That’s a good question. I’d put my money on McGrath but it would definitely be close!