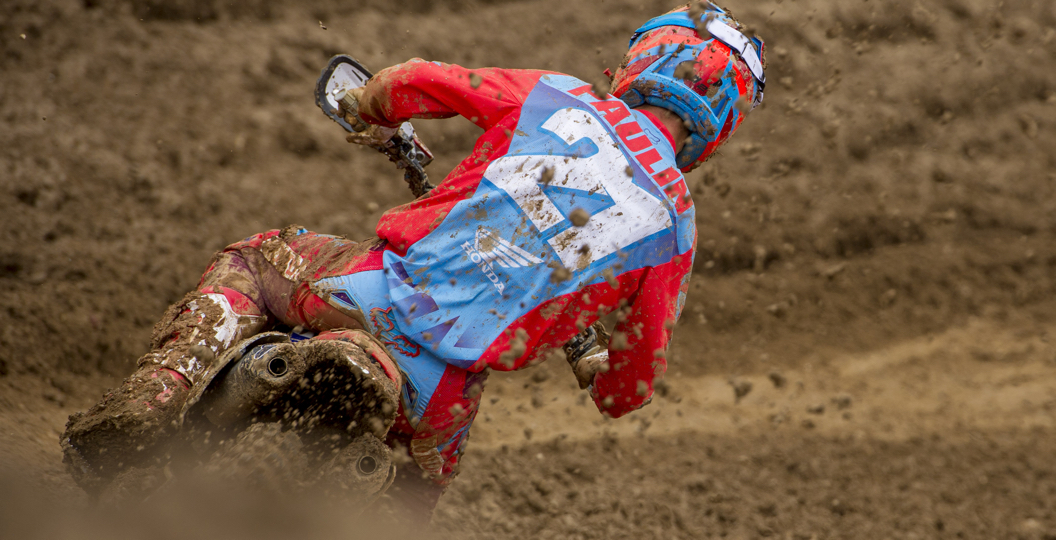 Gautier Paulin finished third in race two at the MXGP of Italy today amid thunderstorms that made track conditions very tough.

Terrible weather at the start of the day meant that the track was waterlogged and incredibly muddy. As a result, only ten riders went out on track for the morning warm-up and both Team HRC riders opted to sit the session out as with track conditions so changeable, there was little to be gained by venturing out but a lot at stake with the track perilously slippery.

By race one, the thunderstorms had stopped and the skies cleared, but the track remained very treacherous, causing many yellow flags. From the start Evgeny Bobryshev slotted into ninth and rode a measured race to keep ahead of the conditions and come home in eighth, having been fighting for sixth in the closing stages.

Gautier Paulin struggled at the start when his gate bounced and slowed his progress into turn one, so he found himself mid-pack and experiencing the worst of the conditions with roost and spray from the bikes around him. As a result, he was forced to remove his goggles and pit at the end of the first lap for a new set which dropped him to 19th. He fought back to cross the line in 14th by the finish.

Race two was more fruitful for the Frenchman as he carved his way to the front with a strong start and settled into a third position that he retained until the end. Bobby was tangled in a first corner incident however, and whilst he didn’t crash, his right leg was injured. Although scans show no fracture, the pain hampered the rest of his race and he will undergo more scans during the week before Germany.

Gautier Paulin: “In the first moto the start was ok but then I struggled with my goggles in the first corner. I was around eighth and in the middle just getting mud, mud, mud from everywhere so then I had to take them off. On the first lap I stopped in the pits to change them and then had a small crash so it was a really hard moto for me but I was able to finish and get points and that’s it. In the second moto I finished third and that’s ok but I was looking for much better again from this weekend.”

Evgeny Bobryshev: “It’s been a really tough day today. Yesterday I had really good speed and today everything was really turned upside down. The rain was so hard this morning so we had really bad conditions on track. In the first race I was in ninth and then got to eighth but it was like a train behind each other and you couldn’t push or pass. In the second race I had a really good start and was up on the inside but then someone really impacted me from the right side and hit my leg and his bike stuck in my bike wheel. I couldn’t move forward until we got the bikes separated, and then my leg was hurting during riding. I had to do now an exam during the week to see what’s happening with my leg. At the moment there’s a big haematoma, but I think nothing really serious which I’m thankful for.”