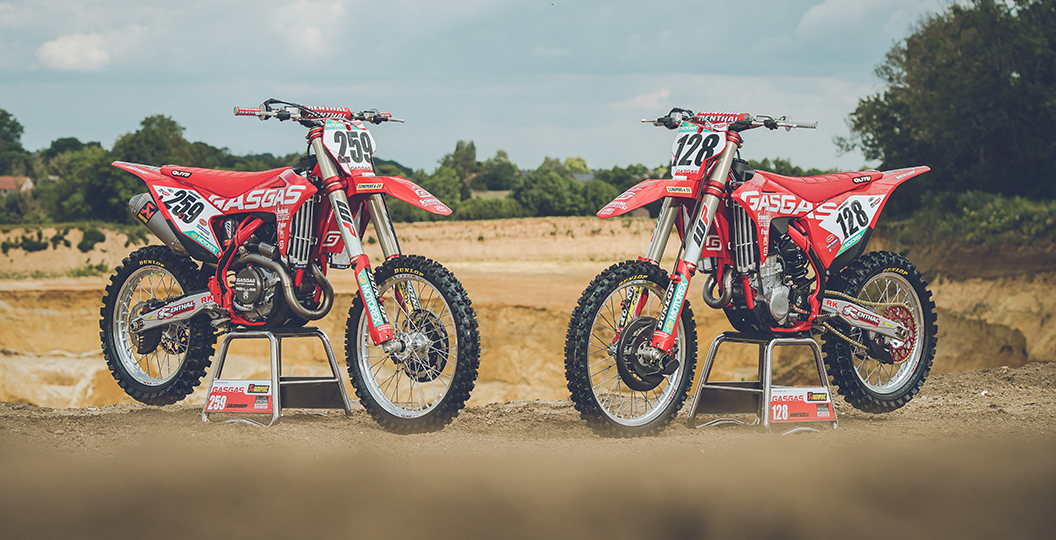 Those inside of the GASGAS workshop have used this enforced break, because of the pandemic, quite wisely, as they have had time to craft new factory bikes for their Grand Prix athletes. The bikes were unveiled via the following press release.

With the restart of the 2020 FIM Motocross World Championship just a few weeks away, GASGAS Factory Racing’s official MXGP and MX2 riders are busy completing their preparations ahead of a return to MXGP competition, armed with the new GASGAS MC 450F and MC 250F factory machines.

Robert Jonas (VP Motorsports Off-Road): “This is another milestone for GASGAS Motorcycles. Knowing that Glenn, Ivo, Jeremy and Simon will be heading back into MXGP and MX2 competition on the new GASGAS MC 450F and MC 250F factory machines is a proud and important moment for all involved. Following GASGAS’ return to top-flight motocross earlier this year, introducing these new bikes was a key next step for us. Knowing just how much both Standing Construct GASGAS Factory Racing and DIGA Procross GASGAS Factory Juniors are looking forward to getting back to racing, for them to be able to complete their final weeks of preparations and then head into what will be a busy few months of MXGP racing with their new GASGAS Factory Racing machines is really exciting. We are really looking forward to seeing these new bikes out on track and to all of our riders continuing their 2020 MXGP and MX2 seasons.“

With more than four months having passed since round two of the 2020 FIM Motocross World Championship, GASGAS Factory Racing’s official teams – Standing Construct GASGAS Factory Racing and DIGA Procross GASGAS Factory Juniors – are prepared for the much-anticipated and imminent restart of the MXGP series. Heading first to the Dutch International races being held at the Arnhem circuit, team riders Glenn Coldenhoff, Ivo Monticelli, Jeremy Sydow and Simon Längenfelder will all compete on the new GASGAS MC 450F and MC 250F factory machines.

In the MXGP category both Glenn Coldenhoff and Ivo Monticelli are well prepared for their return to the highly competitive class. With Monticelli looking to put a frustrating start to his 2020 season behind him, Coldenhoff will resume his quest for a place inside the championship’s top five.

For MX2 class riders Jeremy Sydow and Simon Längenfelder, the upcoming MXGP of Latvia will not only allow the young duo to return to world championship competition on the new MC 250F but also to continue the impressive run of form they each displayed during the opening two GPs. The new GASGAS MC 450F and MC 250F will take to the track for the first time on July 26 at the Dutch International event being held at the Arnhem circuit.

Glenn Coldenhoff: “This new bike is something I’ve really been looking forward to. It looks great and it’s really cool that we will return to racing with a new bike. Obviously, the last few months haven’t been like everyone expected but this is a special moment for us all. I’m feeling really good and my feeling with the new bike is great. I just want to get behind the gate again now and start racing.”

Simon Längenfelder: “This new bike just makes everything better for me. Riding it feels so good, I can’t wait to be back racing again. Over the next few weeks I will continue working hard, so I am in the best shape to compete on my new GASGAS.“