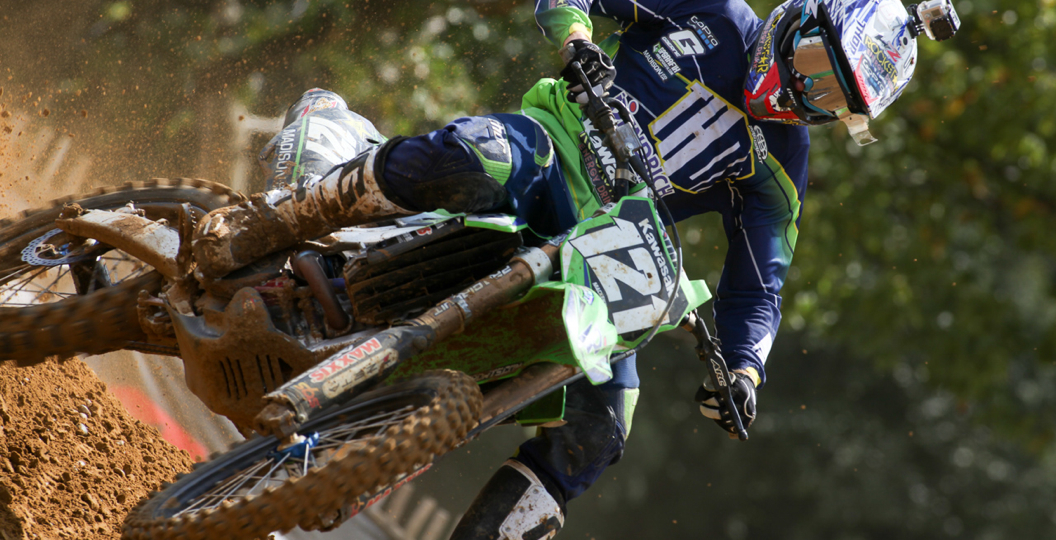 The MX Nationals championship has moved into its second half and while most of Pendrich Height Services Kawasaki remained north of the border to compete the Scottish championship, Bryan Mackenzie hopped into the team’s support van with trusty mechanic BC and friend Ed, and headed south to Canada Heights.

Great sunny weather in Kent greeted the boys on Saturday morning for their practice, and Brymac promptly went straight to the top after his qualifying session. Before the first race on Saturday, the organisers made the decision to combine the Pro classes back into a single race, which made things more challenging.

The race on Saturday got off to a less than auspicious start. Stuck in the middle of the pack, Bryan crashed on the first lap, losing a number of places in the process. The next few laps were crucial in returning him to where he was at the start, before the work to move up the MX2 field began again. After thirty minutes, Bryan went across the line third in the MX2 class.

The next morning dawned sunny again, and with the first race of the day on the line just before noon, things were looking good. Off the start in the front, Bryan stayed on the ball throughout the race. He kept up the pressure on Steven Lenoir in front of him whilst under pressure from championship leader Neville Bradshaw, taking second in the end. The second race saw even more of an improvement, with Bryan going into the class lead from the start. Halfway in, a small mistake proved to be costly; it allowed Lenoir to pass, relegating Bryan to second.

All results tallied up to a second overall on the day, narrowing the gap in the championship just a little more and leaving the boys all a-smile on their long trip back home.

Meanwhile, Rhynie (Aberdeenshire) hosted the penultimate round of the Scottish Motocross Nationals where Pendrich Kawasaki honour was fought for in the big wheel 85cc and National classes by teamsters Lee Perfect and Ross Rutherford while  team technician, Dean Mackenzie, took to the Clubman Open class in a one-off ride.

Perfect and Rutherford both extended their respective championship leads by taking home convincing victories in the 85 and National categories while Deano equalled his brother Bryans score from the weekend taking the second step on the podium in the Clubman to round out a successful weekend for everyone in the team.
Bryan Mackenzie: The weekend’s been pretty good, it’s been a divided team this weekend because there is a Scottish championship round as well, so it’s just me, BC and our friend Ed in the van this weekend. We’ve just been winging it and working out of the back of the small van, and it’s been pretty good, actually. Racing went pretty well, in the first race I had a crash in the first lap, which left me with a lot of work to do but I still got to third MX2, and on Sunday, it’s been better starts and fighting for it with the top three. I led the last race for a good while, then made a mistake and lost the spot to Lenoir, but me, Neville and Steven were pushing a strong pace today, which I think if we can do that at the Maxxis British, we could be styling next week as well. It’s been a hard workout, second overall and taking some more points for the championship and with the boys winning back home at the Scottish championship made this a top class weekend.