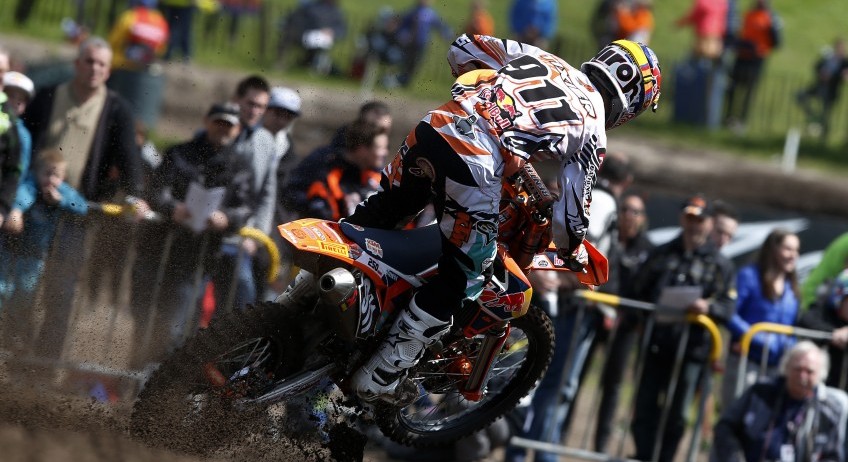 Despite his second place in the championship last year Jordi Tixier is sometimes a bit under-rated. The French kid is super smooth and very technical on the bike and when he is on form is very similar to Marvin Musquin in his riding.

But sometimes Tixier has trouble performing up to his expected level and just like last year the first GPs of the season didn’t go his way. But also just like last season,Tixier has found his flow again and has made the podium the last two weekends in the row.

Tixier is now up to fifth in the championship  and despite a niggling wrist injury is starting to show the form that made Red Bull KTM sign him as a factory rider a couple of years ago. The Frenchman might just need to win a GP though to get his self-belief to the next level in order to show us all his full potential.

But Tixier should only get stronger from here on so we caught up with fast Frenchman to discuss his season and to find out what it is like to get to work with Stefan Everts.

MX Vice: It is a bit like Déjà vu from last season with a slow start to the year then getting stronger!

Jordi Tixier: Of course the first GP in Qatar and Thailand was bad for me, I cannot say it was good but I got some points for the championship but Brazil I was struggling all the weekend. Then in Arco Di Trento I had a good training, I changed something on the bike and in my head but unfortunately I crashed in the timed practice and twisted my wrist – I had broken bones and it wasn’t easy to ride.

I rested during the week and then in Bulgaria I got my first podium of the year. To get back on the box was pretty good. Here in Valkenswaard I didn’t get a good start and came back to second place. In the second moto I got the holeshot which is what I want to do but I crashed two times and I hurt my wrist, it was jacked pretty bad but I still came through to fifth, it isn’t what I expect but I am still on the box with third overall. Hopefully it will be second at the next GP.

MX Vice: Was it hard to bounce back from the opening three rounds, especially when the other French riders like Ferrandis and Febvre were doing well. Did you want to make yourself the top French guy again as well as get back on the podium?

Jordi Tixier: Of course! This year the level is higher than least year, there are seven or eight riders that can be on the box every weekend. You have to take a good start and have good speed for 35 minutes. For sure I want to be the best French rider and be at the top of the championship.  At the minute I am fifth but I want to take the maximum points I can every weekend and see where we are at the end of the year.

MX Vice: You are always good at Valkenswaard, last year you were really fast as well, what do you put your pace round here down to?

Jordi Tixier: You know the last two years since I have been on the factory KTM team, every winter I have been training in the sand and I am getting better and better every year. The sand is something that I like now, before it was something I really didn’t like because it was really difficult for me. But I start to like it because it is rough and it makes it possible to pass the other riders. Last year I got two times second and this year I was second in the first moto and then fifth, but was second before my crash.  Everything is going well for the moment, I just need to keep focused on my riding on the bike and we will see what happens.

MX Vice: How much has Stefan Everts helped the last couple of years? What does he bring to your racing?

Jordi Tixier: Stefan has brought me a lot. It is good to have a ten time world champion near you all the time . He brings me a lot with my riding, especially in the sand and also mentally. After the first four GP it is really bad but now after being on the podium everyone is happy again – I hope!

MX Vice: Do you feel the MX2 class is under-rated over the couple of years?

Jordi Tixier: Yeah of course. Everyone knows Jeffrey is faster than everybody especially in the sand but on the hard pack everything is possible – you see with Tonus in Bulgaria he fought with him for 35 minutes. Everything is possible, if you get a good start and find the speed you can win a GP. And hopefully I can do that before the end of the championship.

MX Vice: You have mentioned before you would like to go to America or will you just focus on the World championship for the next couple of years?