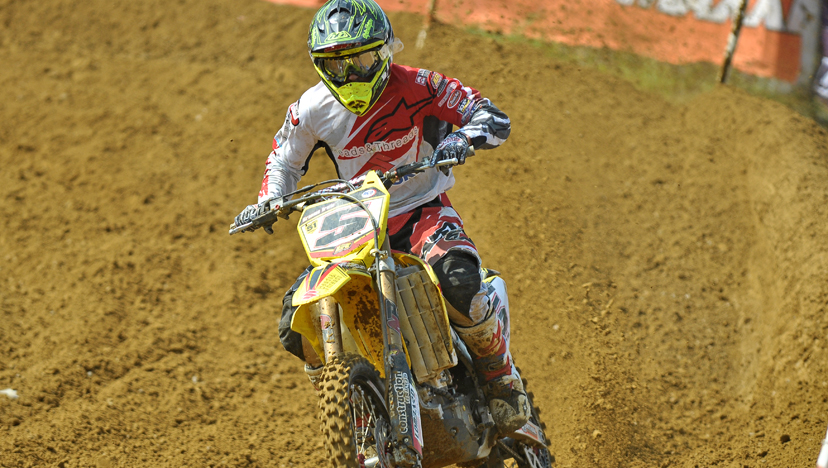 Graeme Irwin had his best results of the season at Canada Heights in the first two motos, but a bad start in race three cost him a chance of the coveted podium.

But Irwin showed he could mix it with Whatley, Nicholls and Simpson for a few laps as the front four pulled a giant lead on the pack in race one. And he will undoubtedly take that confidence into the British GP this weekend.

Irwin is always pushing for more and hopes racing the GP with help bring his speed on as he learns from the best in world, admitting that his long term goal is still to race in MXGP.

We spoke with the always determined Heads and All Threads Suzuki rider about his performance at Canada Heights and his hopes for this week’s British GP.

MX Vice: It looked like you were on for a potential podium going into the last moto!

Graeme Irwin: I was gutted! I knew it was between me Brad and Whatley for third but it was my worst start all day. Sixth was right there, Snowy was just in front of me but he is a hard guy to pass!

MX Vice: Was it hard to pass in general out there?

Graeme Irwin: It is, me and Brad were coming through together, he would get by a rider then it would take me a lap or two to get by but we were running a similar speed.

MX Vice: I saw you put a move on him but he got you back straight away…

Graeme Irwin: Yea racing with Brad is always hard, I went for a move up the inside and gave him a bit o a shove, then he came across me and put the old foot out, so I tried to run it up the inside again but just couldn’t make it stick and the next corner he squared me off. Even that last race I was top five speed but we just didn’t get the start but I still wasn’t far off fourth. With a bad start out there it is tough to come through the pack and not many guys did.

MX Vice: The first moto you got away third and you were hanging with the “big three” for a while and were on Whatley’s pace the whole moto.

Graeme Irwin: Yeah I think I could have beat Whatley but I got sick towards the end of the week, I got a bit of arm pump three or four laps in to all the races. But you can’t be fit and healthy every weekend so I just need to rest up this week and get ready for the British GP.

MX Vice: Racing with Nicholls and Simpson in the British obviously helps your speed but are you hoping the British GP will bring you one even more?

Graeme Irwin: Yeah, definitely. Nicholls got sixth last weekend and Simpson has won a GP, to beat them guys is going to be hard. To sit with them is fun, they have an advantage riding GPs, even in the heat, this was the hottest day for us this year.

MX Vice: What are your expectations for the British GP?

Graeme Irwin: Yeah we will just go and see how we are getting on in free practice and timed qualifying and take it as it comes. Obviously I want to be in the points, I think there are 30 entries and it is 30 fast guys that everyone seems to forget. It isn’t ten fast guys and the rest are donkeys . If I can get in the points, have some good races and ride smart. Riding with those guys will bring me on, I am not saying I am as good as those guys but that is where I want to be (in MXGP) and I will be trying my best.

MX Vice: You have been riding a lot at home – is that to get the prize money to pay for the engagement ring?

Graeme Irwin: I wish! If I win all the races at home I still don’t break even, I have to pay the boat and my expenses. Normally every time I have raced at home I haven’t made one penny and lost at least £100. You know yourself by the time you pay the boat and the price of diesel -it all adds up.

MX Vice: Do you do it just to get more bike time?

Graeme Irwin: It’s not even that but I never feel you are too good to race at home. Some guys race at home and some don’t but racing the guys at home is always hard. In the British championship it’s a different story but there are different tracks at home, it’s real old school, but over here (in England) we have modern tracks that are technical. But at home is good, it’s fun, it’s nice to race in front of my family and my sponsors and show them I can still ride!