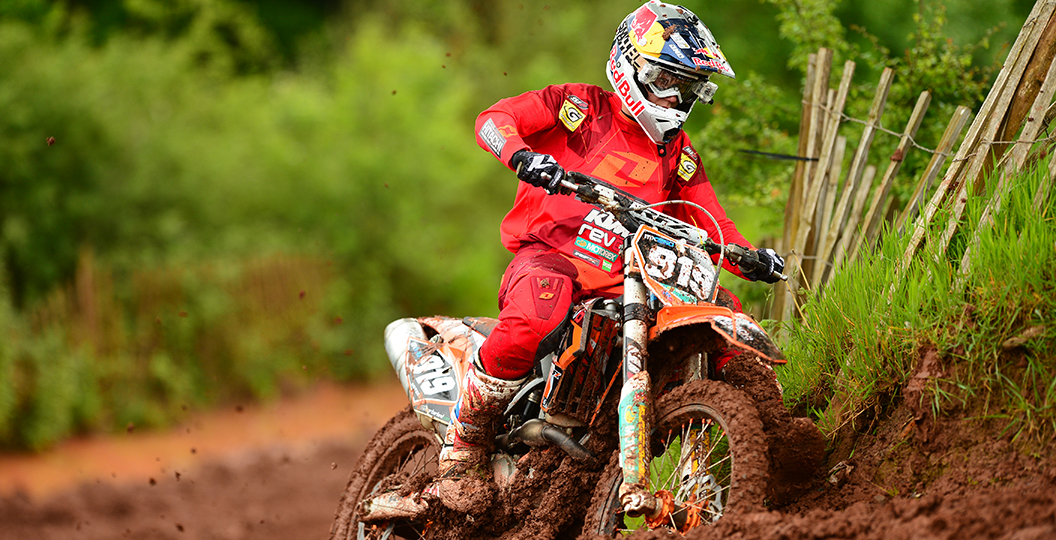 Ben Watson is one of the most exciting talents in the UK currently, as he has won motos in the EMX250 series, and is surely going to win a race in the Maxxis British Championship very soon. Ben’s confidence seems to be growing each week, as he takes everything in his stride and is really down to earth. We caught up with him after he took the MX2 win at the most recent MX Nationals round.

MX Vice: How has your weekend gone, Ben?

Ben Watson: Sunday has been a lot better than Saturday. It was pretty wet, and I managed to get fourth in qualifying. Free practice was a little wet, and I only did a few laps just to see how the track was. In the first race I had a good start but it was carnage on the first corner with bikes going through the tapes and going down. I pulled through from fifth to third but had a couple of crashes, one was an incident with the mud and another was when I was racing Nev [Bradshaw]. But getting third after the two crashes was a good result.

I knew I could do better in race two on Sunday, but I didn’t have the best of starts. I managed to come through from seventh to second, which I was happy with. In the last race, I needed a good start and got the holeshot, from there on I took the win after Adam’s chain had snapped, and I got the overall.

So, now that you have your first overall win how are you going to celebrate?

I think all the family are going out for some food to celebrate, and then we’ll truck on back home.

Looking back over the past year and what you have achieved in that time, are you surprised by your progress?

When I was doing the EMX250 last year, I only qualified for a few of the rounds. It was a steady year, and I worked hard throughout the winter. I came out at the first EMX250 this year in Bulgaria and won it. I was surpised if I’m honest, as I went there to do my best and try to qualify – I did not expect to get the win. I then came into the second round in Spain and had a first corner crash in the first race, and a third in the second, which gave me a lot of confidence. When I come to the British Championship and the MX Nationals, I know I have the speed.

Do you think the European series has helped with your progress over the past year?

The EMX250 series has definitely helped Adam and myself with our speed, and we have both seen a huge improvement against the other riders that are just competing in the UK. No matter where you are in the race at the European’s, you are racing against fast riders, you have to try so hard and give it absolutely everything.

Take us through what a week consists of for Ben Watson, what are you doing different to other riders?

I try to ride more than training, as I don’t believe that there is any better training for motocross than actually riding your bike. I don’t really go to the gym – I just ride my mountain bike. Some people train really hard in the week in the gym and do as much as they can, but by the weekend they are kind of over it. I think riding as much as possible is good, as long as you don’t overdo it. Whatever I’m doing it seems to work for me!

Seeing as you’re riding all of the time, racing at the weekends and travelling all over Europe, are you still enjoying it?

I’m enjoying winning! It’s nice to know that I have the potential to win at the moment, so I’m really enjoying riding and racing.

So, is it a little weird now having grown up watching Neville Bradshaw and Bryan Mackenzie, and now you are not only racing with them but beating them?

When I was in the 65’s and watching the pro’s, you just see how fast they go and wonder how you are ever going to get like that. Now that I know I can be up there and challenge for wins it really is a great feeling.

Looking forward, you have a very interesting few years ahead of you with, with GP rides and the MXDN team. There are exciting times ahead for Ben Watson!

Being on the shortlist for the des Nations is really cool, but I’m under no illusions that it won’t happen this year. I’m not putting myself under any pressure, but it’s really nice to be recognized.