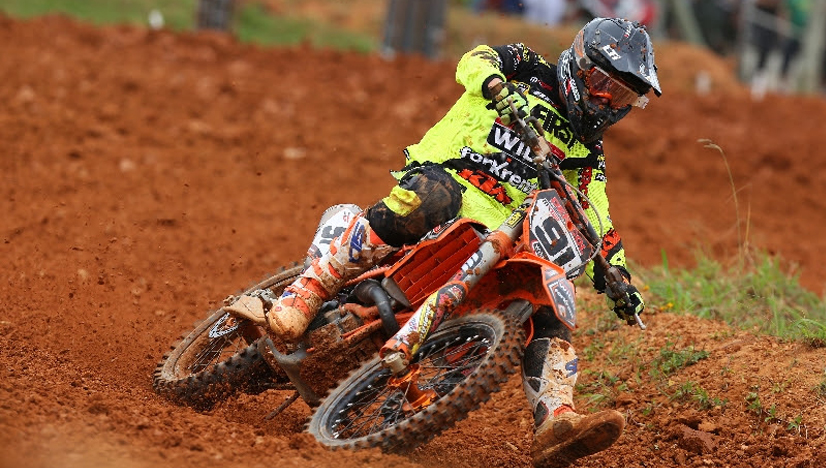 Beto Carrero, Brazil, 31 March 2014: After two weeks back in Europe, the team headed to Beto Carrero in Brazil for the third MXGP of the season. With the weather conditions not as extreme as Thailand, the team were relieved that the track looked in prime condition and as always, the tone was set for the weekend by the excited fans.

Qualifying:
With the sun shining after a wet morning, the riders accustomed quickly to the track and although both suffering badly with arm pump, Jake Nicholls and Matiss Karro improved on their timed practice positions, with Nicholls qualifying in 10th and Karro just two places behind in 12th.

Race 1:
Nicholls made a great start in the race and was riding well and looking comfortable as he progressed into the top ten. As soon as Strijbos and Paulin gave him the opportunity he moved up into eighth place. With the pack tightening up in the closing stages Nicholls lost a couple of places, leaving him just outside the top ten and finishing strong in 11th.

Karro starting in 12th fought hard for the holeshot but unfortunately suffered a crash on the first turn. After dusting himself down he set off after the pack, gaining position back quickly, although as he attempted a pass on one of the Brazilian riders he crashed a second time. Leaving him with a massive amount of work to do to get back in the points, he fought hard and with his determination he stuck at it and was rewarded with a point for 20th place.

Race 2:
Karro proving his focused approach and putting his first race behind him, he went wheel-to-wheel with Paulin as they battled for the hole-shot in race 2. The Frenchman battled solidly and took the prize with Karro reaching turn one in second place.

Nicholls didn’t fare quite so well at the start of the race and was forced down to 18th place. Pushing hard early on he managed to improve his position to 15th place. Having come in to the season missing some practice time due to his back injury, it was no surprise that he was feeling the pace in Brazil and struggled to find his rhythm. Sensibly he didn’t push too hard but just enough to hold his position for the rest of the race to take 15th at the finish.

Karro had to give ground to Desalle and Cairoli but settled into 4th comfortably which he held for a few laps before an unfortunate landing on the finish jump where he lost his front wheel. After swiftly remounting in 6th Strijbos was on his back wheel and although he battled hard he eventually had to concede to the Belgian.

Karro relaxed nicely into 7th which he held until the penultimate lap when he was pipped by Goncalves, but he managed to do enough to hold off Frossard on the final lap for a great 8th place finish.

Commenting on the day, Matiss Karro said: “My first race was bad and I wasn’t happy with two crashes and finishing in 20th place.

“In the second race I was pumped with nearly getting the holeshot, but I had a silly crash when I was running in 4th place. I still finished in 8th, which overall I am happy with. I feel like I am now getting closer to my goals and I want to thank the team for giving me such a good bike which is just simply awesome out of the gate.”

Jake Nicholls added: “I am pleased with my weekend here in Brazil. Every timed session I was running in the top twelve, although I struggled a bit with my suspension on Saturdaybut having made some tweaks I was a lot more comfortable today.

“First race I was in 9th position for a long time but tightened up just after half way through and lost my rhythm. Having used a lot of energy I held tough for 11th and was close to the top ten. In the second race I didn’t get a great start and didn’t find any rhythm until the last five minutes of the race really. My arms still felt tight and I felt I was missing that extra bit of energy that I needed. I did still manage 15th and felt like I learnt a lot from this weekend. It’s the first time I’ve ridden a grippy technical track like this on the 450 let alone raced it so I’m very pleased. My back is almost 100 per cent now so I can work hard to get some top tens. Big thanks to the team and my mechanic, they work so hard at these fly away races and my bike was faultless.”

Team Owner and Manager, Steve Turner added: “I’m pretty happy with how the weekend went overall. Jake had two strong rides and took some good points, with Matiss having a great second race but was a bit unlucky in the first after crashing on the start.

“Jake was tired in the second race which is not a surprise after missing three weeks coming into the season, but he rode strategically and didn’t risk too much. He knows it’s a long season and is realistic about where he is at the moment in terms of bike fitness and race pace. To be honest he’s not far off and he showed that in the first race.

“Matiss beat himself up after race one but still gave it 100 per cent off the line in race two which is what gave him the platform for a great result. I know he is going to keep pushing to get those good starts and in time he will get used to running up front with the top six.”

The team go into the MXGP of Trentino on 13th April with Jake Nicholls in 16th place and Matiss Karro in 19th in the Championship.