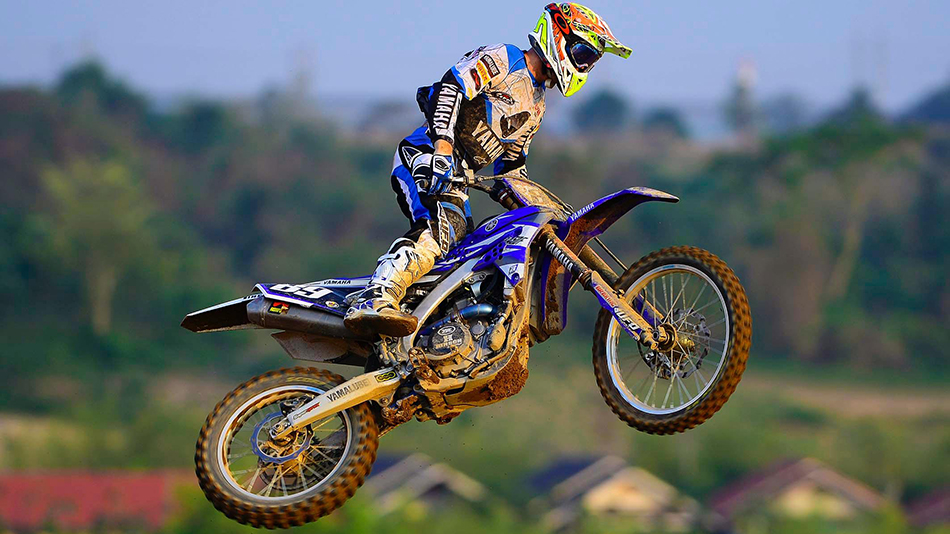 Yamaha Factory Racing continued their buoyant beginning to the FIM Motocross World Championship as Jeremy Van Horebeek celebrated a first podium finish with his works YZ450FM in the premier class at Si Racha for the Grand Prix of Thailand. Round two of eighteen took place in typically hot and demanding conditions and with 22,000 spectators braving the incessant sunshine at the venue close to the coastal city of Pattaya. Van Horebeek achieved his milestone – his first career MXGP trophy in just over one season in the category – with confident and error-free runs to two third positions in the two motos.

Si Racha was hosting a Grand Prix for just the second time and the course was mostly unchanged from 2013, thus fast, sweeping and undulating with close similarities in the lap-times by the leading troupe. By the second race the terrain had become very bumpy, slightly slower and more technical. A later start time on the schedule meant dipping sunshine also created viewing difficulties around some of the slopes and jumps.

Van Horebeek rode to a comfortable third position in Saturday’s qualification race and knew that a positive launch from the start gate would be essential for the Grand Prix motos on Sunday. In the first outing he drilled the YZ450FM into the leading gaggle of five and then enacted a consistent but lonely race to another third place. One half of the job was done and the Belgian put himself into firm contention at the launch of the next moto when he seized the holeshot. Circulating with Tony Cairoli and Clement Desalle ‘JVH’ kept pace with the front two but reached a point deep in the race distance when he opted for safety and to confirm the third step of the rostrum. Fifth and third in the first two rounds of 2014 Van Horebeek is building effectively into the campaign and now stands fourth in the MXGP points table.

Elsewhere DP Racing Yamaha’s David Philippaerts had a tough weekend with the high temperatures and the special specification of fuel (temporarily approved by the FIM to pass through Thai customs) creating some set-up hitches. The Italian is working diligently within his own squad in 2014 but couldn’t cure the problems to make the leaderboard. Bike it Yamaha Cosworth’s Rui Goncalves also briefly encountered a similar experience with the fuelling – as with other teams and brands – but overall the Portuguese railed well and was in better physical shape after starting the season with fever last weekend. Rui still lacks test and dialling-in time with the YZ450F but his 15th and 7th pointed to some positive signs for the races ahead.

The MXGP Yamaha crew will now freight bikes, spares and material to the other side of the world and have some time to consider results and more preparation will lie ahead. Round three and the Grand Prix of Brazil will see the championship head over to Beto Carrero, north of the popular city of Florianopolis, at the end of the month.

Jeremy Van Horebeek: “I feel really good and my speed is good. I rode my pace because I knew it would be a difficult one with the heat. I said to the guys ‘come to the podium’ before the second moto because I felt that it would be a good day. Together with the team we have been working hard and the start in the second moto was evidence of that. Clement passed me but I was there for twenty minutes and felt really good. It was really hot and I started thinking about the podium as the race went on and figured if I felt better at another GP then I might be able to live with the boys more. I think we have done a great job getting this bike working for me. I’m really happy.”

David Philippaerts: “My team is working really hard and we did everything we could to be in the best shape this weekend but couldn’t avoid problems with the power. I think many others had the same. We tried to solve it but without any luck. I hope we can get some more information and sort the problem for Brazil and I am sure we’ll do it.”

Rui Goncalves: “It was definitely a big improvement since last weekend. We even made a step from yesterday to today. I didn’t have such a good start in the first moto but I kept steady with the lap-times. I tried to progress and break into the top ten but with two laps we had some of the same problems with the heat that many were having. I just had to roll it across the jumps and to the finish. That was a bit of a bummer because I know I could have made the top ten. In the second moto I started around twelfth and just kept going to make my way to the front. To finish seventh was good and lets say I’m happy. I’m still looking forward to working with the team because we haven’t had much riding time as you know. We are a strong group and we’ll keep on looking for improvements and we should soon be even better.”