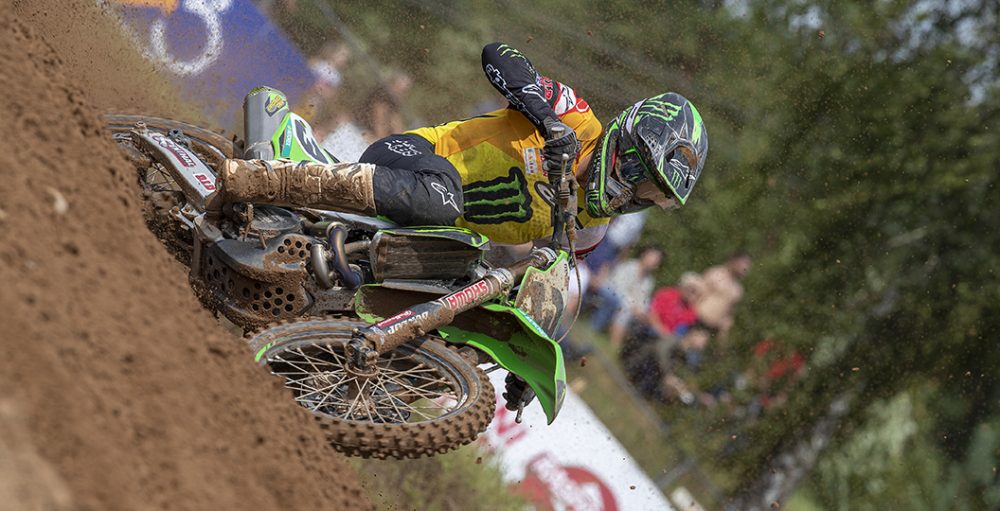 Romain Febvre signs 2022 deal! Febvre has secured his future in the Grand Prix paddock and thus one of the biggest pieces of the silly season puzzle has fallen into place. Febvre will head to Kawasaki’s new factory effort, heavily rumoured to be run by Kimi Raikkonen’s IceOne operation, at the end of the 2021 FIM Motocross World Championship. It has not yet been confirmed who his teammate is going to be. Official communication from Kawasaki Heavy Industries is below.

French rider, Romain Febvre, has signed a direct contract with KHI, the Kawasaki factory to compete in MXGP for 2022 and 2023.

The deal is a tangible indication of the confidence Kawasaki has in the world championship potential of the 29 year old from Epinal, the capital of the Vosges department of north eastern France.

With a reputation for the ability to win on any surface from hard-pack to deep sand, Febvre will be a core element of the Kawasaki approach to motocross at its highest level according to Race Planning Manager for Kawasaki Motors Europe, Steve Guttridge.

“From his first races as part of our lime green family we could see what a great fit Romain was with Kawasaki and the KX450. His affinity with the bike is there for all to see. He has a great vision for what he wants to achieve and a plan of attack that marks him out as exceptional even amongst the very best of the current crop of top MXGP riders.”

For Romain to conclude a two-year deal before the 2021 season has matured will allow him to concentrate on the job in hand as the Frenchman explains.

“It was very important for me to agree a deal to allow me to focus on the 2021 championship and give my best efforts to my team. I am now one of the fastest guys in the championship and I am looking forward to a new adventure and achieving great things on the factory Kawasaki.

“A two-year deal will allow me to plan and extend even further my abilities with the KX450. It already suits my style well in terms of the type of power delivery I like plus the narrow chassis suits my riding style and body positioning really well. Now I have the time and space to fine tune the package and continue the necessary training regime to achieve my goal, an MXGP world title for Kawasaki.”

Concluding, Steve Guttridge added that Kawasaki hoped that the announcement would answer paddock speculation and so allow Febvre to concentrate fully on what has become a fascinating and hard fought 2021 season.

“There is still work to do in this year’s championship, and Romain and our team are pushing as hard as they can to get on the top step at every round and fight for the title this season. We are super happy to have secured Romain to compete in MXGP and we hope that all Kawasaki fans worldwide will join us on this exciting journey. Now that we have announced this factory deal for the coming two years, we hope that Romain will be given the time, space and respect necessary now to focus on the job in hand.”