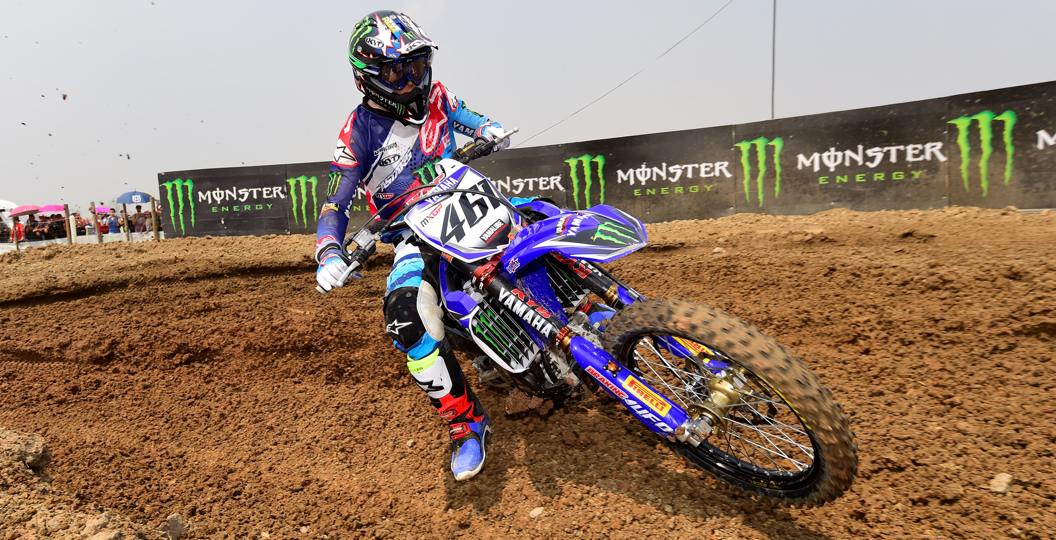 Febvre does the double

Monster Energy Yamaha Factory MXGP rider Romain Febvre won the MXGP of Thailand on Sunday in boiling heat and humidity, taking both motos and the leader’s red plate in the second round of the 2016 World Championship season. Teammate Jeremy Van Horebeek grabbed a valuable podium finish to take third overall in the standings.

In Sunday’s first moto Febvre waited until lap 12 before passing Antonio Cairoli near the third turn of the 1600m course.  The Frenchman then accelerated on his Yamaha YZ450FM, putting time between him and the rest of the field to finish first.

Teammate Van Horebeek again controlled a cushion of space between himself and riders to his front and rear, riding to fifth in the early moto and sparing his energy under a blazing Thai sun.

Febvre led moto two from start to finish, able to pick and choose his lines over the 1600m Suphan Buri track safely and confidently. Last year’s MXGP World Champion was untroubled by the high quantity of jumps, hard and slick dirt and deep ruts in every turn, winning moto two by a healthy 6-second margin to claim the top podium spot for the Thai round.  The result sees Febvre reunited with the red plate as the current leader the 2016 MXGP season classification

Monster Energy Yamaha Factory rider Van Horebeek started moto two further back, but waited patiently to climb through the field as Thailand’s tropical heat wore down the resistance of the entire field. The Belgian rider finished fourth in the late race to land on the third step of the podium and is now third overall in the 2016 MXGP season classification.

Guillod climbed back from a poor first moto start, passing riders nearly every lap until settling in to 11th in the final 10 minutes of the race.

The second race saw him waste no time at the start, winning the holeshot and holding his own against more experienced riders in his first season on the YZ450F. The Kemea Yamaha Official MX rider held on to finish moto two in 10th for 12th in the Grand Prix, and is now 12th overall in the 2016 season classification.

After two consecutive weeks of racing and travel, MXGP now pauses until the end of March when competition will resume at Valkenswaard in the Netherlands.

Romain Febvre: “I’?m happy to win the first moto, and the second was easier, because after the second corner I was in the lead, and I could make a good gap, and ride safely to the finish. In the first moto I had a really long battle with Tony Cairoli, and you get the stones and the dust in your face, and here it?s really difficult to pass. I was frustrated because I couldn?’t pass him, and even when I did I had to slow down a bit and take a break, because I was really tired.”

“I?’m really happy to take the red plate, but you know it?s still a really long season ahead. It?’s really nice to have it, but there are still 16 rounds to go.”

Jeremy van Horebeek: “It’?s good to start the season in fourth, and I am going to keep building from here. It’s an even better start to the season than 2014, so I’m looking forward to the rest of the year. I always feel miserable after the heat, I don?t see how other guys can do it on days like this. I think you can see the difference also on our faces, because I don?’t think I worked any less hard than anybody else. I can?’t resist the heat, I don?t know why. I do everything to prepare for it, so I?’m glad to walk away with a podium.”