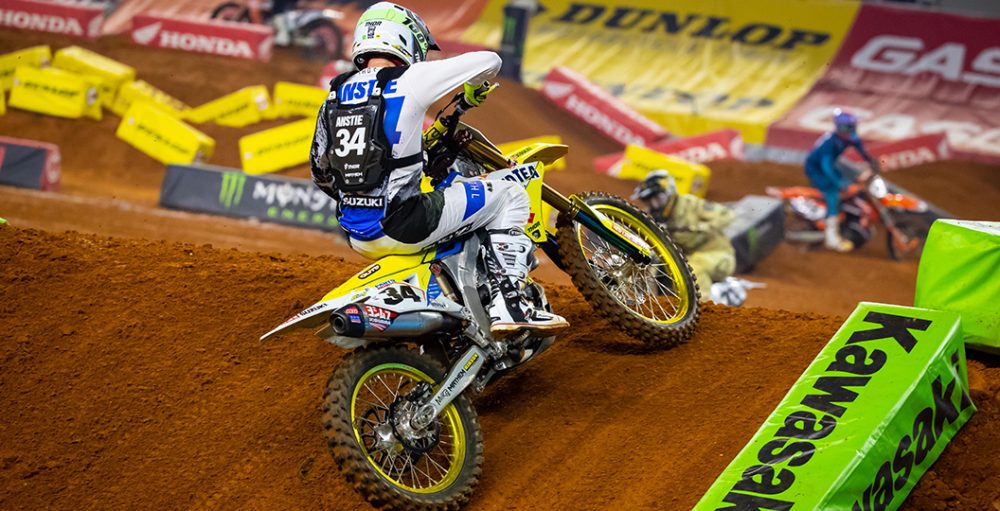 Twisted Tea H.E.P Motorsports Suzuki just announced that Max Anstie, who has ridden in ‘yellow’ for two years now, will not return to the awning next year. It’s been rumoured that Anstie is set to move onto pastures new for some time, but this is the first piece of confirmation. A new deal is expected to be announced at the beginning of next month. Yes, he will remain in the United States. Twisted Tea H.E.P Motorsports Suzuki’s farewell message is below.

“Twisted Tea Suzuki and Max Anstie will not renew their athlete agreement for the 2022 season after two successful years competing together. Progressing towards the upcoming @SupercrossLIVE season, the team wishes Max and wife Milly well in their future endeavours. Cheers, mate.”

Anstie was twenty-first in 2021 Monster Energy Supercross, despite missing the first seven rounds with an injury. Eleventh was his ranking in 2021 Lucas Oil Pro Motocross (one round was missed in that twelve-round term). It was a successful two-year stint for the duo, which was a significant step for both parties; Anstie moved his life to the United States and H.E.P fielded a podium contender for the first time. H.E.P are expected to replace Anstie with Justin Bogle – they are also in talks with another MXGP rider.

2020 Lucas Oil Pro Motocross – Anstie’s first stint with the team – was arguably the most impressive. Coming into the season off the back of a heel injury, he finished ninth in the championship and finished on the podium in just his fourth moto. Anstie led for eleven of the fifteen laps in that moto and had the victory ripped from his grasp by a wayward backmarker. The next episode of the ‘Anstie in America’ podcast on the MX Vice network will cover  his new deal.