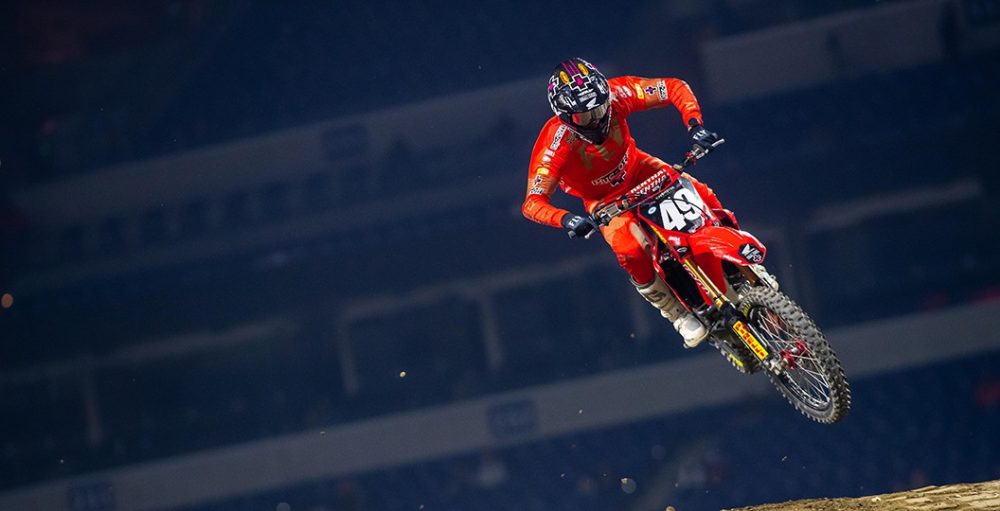 There were chaotic scenes on the starting line prior to the 250SX main event at the fifth round of 2021 Monster Energy Supercross in Indianapolis, as Mitchell Oldenburg made it onto the starting line despite failing to qualify. Oldenburg had crashed out of his heat race, because of a bike malfunction, and then returned to the track for the LCQ. The AMA pulled him off of the line though, thinking that he had broken rules and switched to a spare bike (something that is forbidden in Monster Energy Supercross).

That was not the case though, as Oldenburg proved to the AMA official immediately following the last-chance qualifier. Realising their mistake, and that they had stopped a capable rider from competing for points, the AMA granted him a direct transfer into the main event. That obviously sparked confusion, as no one was quite clear on the reasons why. Oldenburg has now shared the following statement, which explains everything that transpired in the hours leading up to the 250SX main event.

“What’s going on guys. I just wanted to get on here and explain the chaos that happened last night. Everyone saw the heat race crash… I had a bike malfunction that was out of our control, which happens. It is racing dirtbikes. We scrambled back to the semi where my mechanic, motor guy, the truck driver, and team owner all got together to swap a motor out. We kind of did that fire drill thing that you see every once in a while on TV. Basically I walked down to the start line for the LCQ not knowing if my bike was going to make it in time – I picked my gate, prayed for my bike to show up and sure enough it showed up two minutes before we fired the bikes up.

“I pulled into my gate, got myself situated and then I got tapped on the shoulder as soon as the 30-second board went up. I was being told by an AMA official to pull by bike out… There was obviously a lot of confusion and I did not know what the heck was going on. There was not a lot I could do, so I pulled my bike out and went back and forth with the AMA guy. You get a frame sticker when you go through tech, and I’m assuming they use those stickers because you could possibly stamp a different frame with the same serial number or whatever the case may be. What had happened was that we got a frame sticker in Houston and then a new frame sticker in Indy. The paperwork from the AMA was not updated with the new frame sticker that we got in Indy though – it was still showing the old frame sticker that we got in Houston.

“It was just chaos. We went back to the semi with the AMA official and showed him the motor we took out, the bike that we came back with and that there was not another bike on the semi. There was no way that we could have switched bikes. This was everything that went down. My wife had filmed the guys switching the motor out and it was time stamped, so we were able to show them that. As soon as we figured out what the issue was, my mechanic took the new frame sticker off and underneath that was the old frame sticker that matched the paperwork. That was the chaos of it, I guess. The AMA realised at that point that, ‘Crap. We messed up.’

“Not knowing what was going to happen, I got my gear on and went down to the starting line hoping that they were going to let me race. I did not know what was going to happen and just left it up to them. About two minutes before the sighting lap, I got word that I could race but had to line up in the second row and basically take off as the twenty-third rider. Not even 30 seconds after that, Jett Lawrence was pulling his bike out and was not going to race. That was how I lucked into a gate. It had nothing to do with me being an alternate… I was never an alternate. The AMA decided that they did not give me the opportunity to make the main, so this was their way of making it right.

“I do not hold anyone at fault. I know everyone makes mistakes and things happen… I know 100% that if they could redo it then they would have done it differently. Stuff happens and that is just a part of it sometimes. I do not agree with how it went down, but there is nothing that I can do about it now. I am just going to put my head down and focus on doing what I can control. I was riding good in the main and just had another bike malfunction. I do not really know what the verdict is on what happened with the bike. I do not know if something got overlooked or if it was a separate issue, so that is going to get figured out today. Appreciate the support from you guys.”