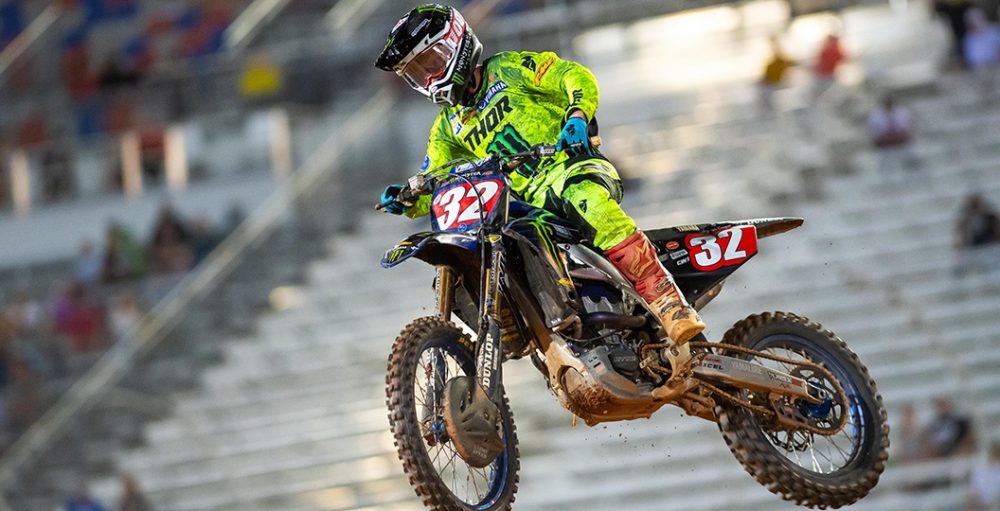 Justin Cooper had a positive time of it at round fourteen of 2021 Monster Energy Supercross; he recorded another main event win and extended his lead in 250SX West. Cooper got some flack after the race, however, as  he questioned whether Cameron McAdoo (who quickly became a hero) should have been allowed to race or not. The words that were said on the podium immediately following the race can be found below.

“I saw the red flag and I saw Cameron [McAdoo] down. I didn’t really think we were going to get a red flag, then we got it over here in the whoops. I don’t know how that works. I didn’t think he was going to be allowed to race that. It really got me distracted on the line. It was especially hard to keep my composure, when the championship is close like this and a situation like that is going on.”

Cooper later defused the situation on social media, by exclaiming that he has a lot of respect for what McAdoo achieved and hopes that he is doing well.

“Man what a night! Felt good on the bike all day and really enjoyed the track layout. These long tracks really keep you on your toes; a lot of obstacles are getting thrown at us each lap. Nice to light the candles again, thank you team. With that being said I had no clue how bad Cameron’s crash was until after the race when I saw a replay. Nothing but respect for someone that is able to get up after a crash like that, let alone race. I would never wish a crash like that upon any one, it’s scary to see. I really hope he’s all good. See you guys Saturday.”

Justin Cooper now leads the 250SX West championship standings by nine points with two rounds remaining; one of those is an East/West Showdown. This thing is still wide open!