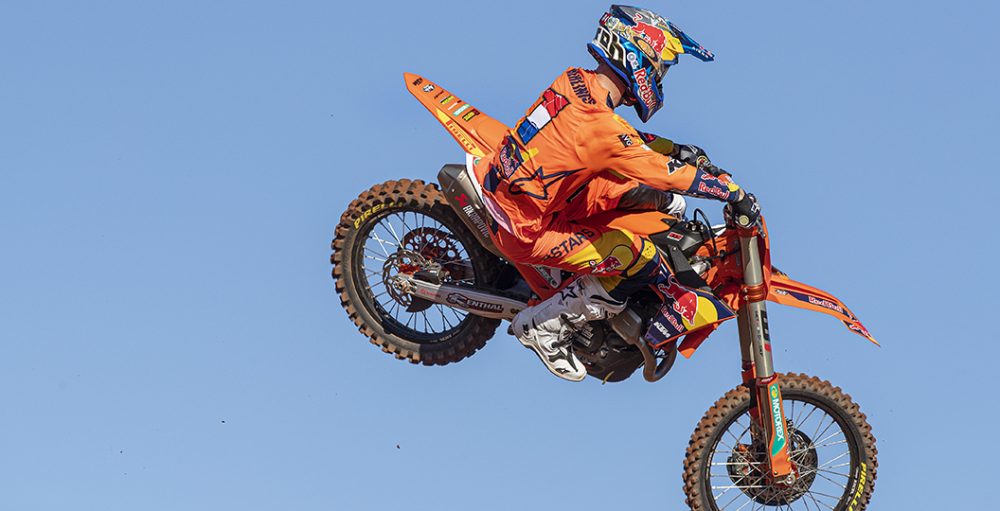 The 2022 FIM Motocross World Championship is around the corner and, unfortunately, there will be no defending champion in either class. Maxime Renaux has vacated MX2 in favour of racing in the MXGP division, a class that will not feature Jeffrey Herlings at round one. Herlings crashed during a pre-season photo shoot in late January and suffered a broken heel. Surgery has already been performed, as confirmed by Red Bull KTM Factory Racing recently, and thus he will miss races. How many is still undetermined though.

“Good question. I don’t know! We obviously did a photo shoot and I had a race before that, along with testing, so I was just a bit tired. We were making a photo shoot and I just got cross rutted; I hit two lines at the same time and slowly went over the bars. Even though it looked pretty spectacular, it was not at such a high speed. I just landed on my foot. I was like, ‘Two feet. Done!’ Luckily, it was only my heel. I did not shatter anything in my foot. My other foot was already really bad from my crash a few years back and I still struggle with it every day. I broke my heel and it only just happened, so it will still take a bit of time. I do not know when I’ll be back. The injury will most likely heal 100%. It just came at the wrong time… We will definitely miss some races. I do not know how many for now. It could be two or it could be four. I have no idea. It could be more or it could be less, I don’t know! We will wait and see. I just want to get back healthy. I just want to have this completely healed and then we’ll see what we can still do.”

Missing the opening round is not unfamiliar to Herlings; he did not make it to the season opener in the 2019 FIM Motocross World Championship and was immediately ruled out of the fight with an injury to the aforementioned foot that is still quite troublesome. It seems as though the best-case scenario for Herlings would be returning at the Grand Prix of Patagonia-Argentina, round three, which would leave him with a slim shot at the title. Even that would be a stretch though, as he would have to come out firing when he does make his debut aboard the all-new KTM 450 SX-F.

Speaking of that new bike, there will be no 450F rider beneath the Red Bull KTM Factory Racing awning at the opening round of the 2022 FIM Motocross World Championship. There were whispers that Antonio Cairoli could be pulled out of retirement and act as a fill-in rider, but that seems highly unlikely now and he does not feature on the pre-race entry list. There are few options for KTM to consider if they want to get their factory steed out on the track. Tom Vialle will be the sole Red Bull KTM Factory Racing representative at the Grand Prix of Great Britain, as well as the Grand Prix of Lombardia.