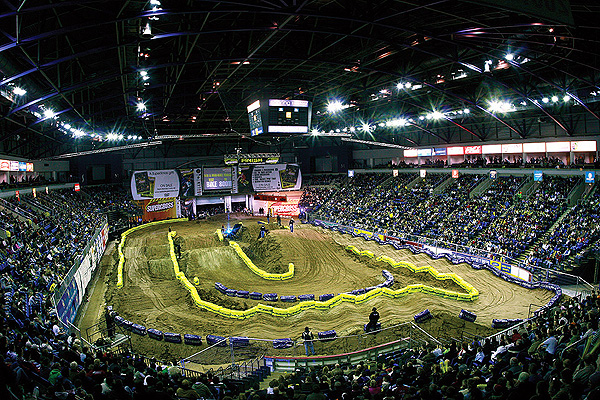 The future of British Supercross has taken a huge leap forward since the season ending finale at the NEC’s LG Arena in Birmingham earlier this month, as Red Bull Pro Nationals & MC Federation owners, Events 22, have acquired the rights from Future West to take over the ownership of Supercross in the UK as of immediate effect.

“John Hellam and I have been discussing for quite some time now about what is the next most obvious move for the British indoor scene and after sitting in the crowd with my family at the LG Arena, I couldn’t help but get the bug back” – explained Events 22 owner and former Supercross promoter, Matt Bates. “And I’m really pleased to be able to announce that we’re back in the game of running indoor events!”

“Ten years ago we staged a total of eighteen indoor events across venues such as London Arena, the NEC Arena, Exeter’s Westpoint and Belfast’ Odyssey Arena. We also continued to run the very successful Belfast International Supercross until 2007. The series also attracted an eight part Channel 4 series of programmes and introduced the likes of Ford, Aiwa, Samsung, Animal and Red Bull to our amazing sport – I’m more positive than ever that we can take indoor to the next level here in the UK, that most importantly follows the successful path of the Red Bull Pro Nationals, by introducing thousands of new fans to Motocross” continued Bates.

Events 22 have been busy visiting the entire leading Arena’s across the UK over the past seven days and plan to announce a series of dates, venues and partners very soon. The series will be open to Youth and Pro riders and will be naturally sanctioned through the forward thinking MC Federation.

“When the MCF stepped in to help Future West stage the final round at the LG Arena following the difficult insurance issues with the former sanctioning body, we all realised that the sport in the UK needs a professionally organised indoor series with a clear and stable direction – I’m absolutely thrilled that indoor will be part of our ever increasing list of events”, explained MCF General Manager Roy Barton.

The MCF have are continuing to grow at an incredible rate since their launch 3yrs ago, with over 40 off road clubs and 2,500 licenses, this friendly organisation prides itself on helping clubs develop at a practical and affordable level . For more information about joining the MCF or registering your interest to take part in the MCF sanctioned Indoor series, please contact [email protected]