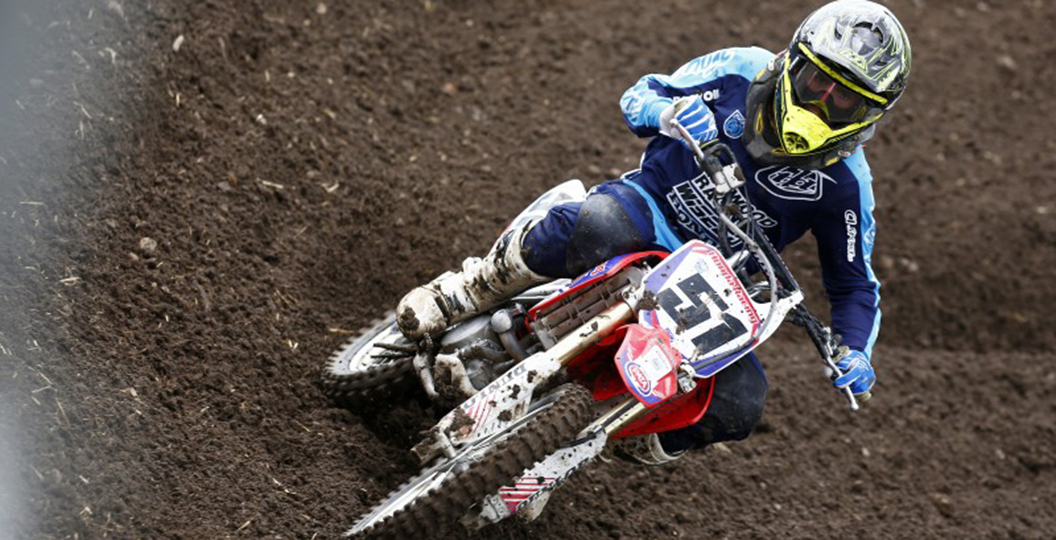 Albie Wilkie took the overall win in Teutschenthal and with it the lead of the Honda 150 European Championship after taking the chequered flag in race two on Sunday.

Jere Haavisto was forced to settle for fourth overall after crashing from first on lap seven, but the flying Fin must be given credit for his courage having cracked his shoulder blade just three weeks ago.

In near-perfect conditions in East Germany, the Teutschenthal crowd were again treated to close and competitive racing as Europe’s finest young motocross riders did battle.

Wilkie led the field away and although he momentarily lost the lead to Haavisto, the young Brit held his nerve to make it back-to-back Grand Prix wins.

Albin Larsen finished second overall after another strong ride aboard his CRF150R, while Eric Schwella took the final place on the rostrum having chosen to compete in the four-stroke series for the first time this year.

The fight for the Honda 150 European Championship title will resume in the Czech Republic on July 26.

Albie Wilkie #51
“The race went really well, I got a good start and thought I was going to win but then Jere came and challenged me in the middle of the race. It was tough but I was pleased I kept my cool. I saw Jere fall and it’s never nice seeing things like that but it happens in racing and I hope he’s ok. I’m over the moon to be leading the championship now as well, I’m speechless.”

Davy Dousselaere, Honda Europe Off-Road Manager
“The new riders really impressed me and it’s been another fantastic weekend of close racing throughout the field. It’s great to see top riders from the European 85cc series like Filip Olsson, who got the holeshot, come over to the Honda 150 European Championship because they see how we mix with the professional riders in the same paddock, on the same track and part of the same weekend. I was also pleased that the range of lap times was smaller than ever as the riders continue to improve under the tuition of Gordon Crockard.”