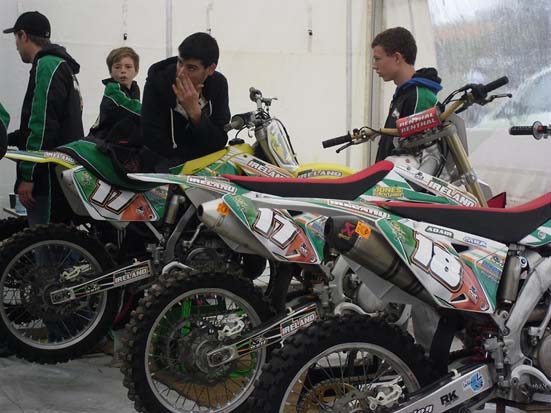 The 41st running of the Coupe de l’Avenir in Belgium was forced to move from their recent home at Angreau, to another ex Grand Prix and Motocross of Nations venue at Nismes in southern Belgium.

This move, coupled with the proximity to the Motocross of Nations the previous week seemed to affect the entry, down to only 10 teams, and the crowd, and the atmosphere was certainly lacking from the old venue.

However, after a leisurely drive from Brussels, including lunch at the cafe on the Namur Esplanade, and a walk round the old GP track, we arrived at our home for the weekend, a chalet in an outdoor pursuits complex near Dinant, costing us £14 per night, great wee spot, I can recommend it.

Saturday dawned a lovely Autumn day, until about eleven, then the heavens opened, the local riders struggled round their Club Championship track, as conditions got worse and worse, qualifying was abandoned and lots drawn for Sunday.

It rained all night, but Sunday was beautiful, unfortunately, being towed into the circuit was not a good omen, and the organisers, to their credit, worked hard on the track to ensure racing went ahead.

The programme was cut by eliminating the twin shock racing, and leaving two races each for the Under 21’s and 85’s, and the Belgian Sidecar Championship round, which normally attracts 25-30 entries, this year only had 11.

The 85’s were out first, and Team Ireland got off to a good start, but the conditions were terrible, and goggles were off after half a lap, various falls, stops for goggles and gloves etc., made following the race a nightmare, but David Galvin, Josh Beausang, and James Mackerel struggled through to a finish.

Race 2 was run in better conditions, and the lads certainly looked more confident on the bikes, but were simply outclassed by the Continental teams, the speed of some of these kids, regular European Championship runners was phenomenal, particularly the Dutch riders.

The 85 Class was won by Netherlands on 25 points, France second with 31 points and Belgium third on 51 points, the big spread demonstrating how much of a lottery the first race was.

The U21 race was run in heavy conditions too, with stops again being a feature for all the teams, Jim O’Neill and Ryan Adair were running particularly well with O’Neill finishing 12th, but Ryan’s bike stopped on the last lap while lying 15th, he was credited with 24th despite this.

Race 2 saw the Irish lads struggle with a tough track, huge rocks and stones appearing, and tiredness after completing a long 30 minute moto, with none of them making the top twenty, Aaron Beausang finishing 21st, Ryan Adair pressing on bravely after a nasty fall, and Jim O’Neill’s machine breaking down.

The event was won by Belgium on 18 points, with defending Champions France second on 31, and Netherlands third on 33.

Individual honours went to Yerki Janvier of Belgium who was imperious on a 450 Yamaha, with his team mate Damon Graulus second and Benoit Paturel from France third.

Again, the speed of all the Continental riders simply blowing away the Irish lads, their training, coaching, and level of competition is way ahead of what anyone in the British Isles is doing, and this must be a wakeup call to any ambitious young riders who seem focussed on British Championships, to look further afield to gain experience, Europe must be the way forward for our riders.

That’s not to take away from the efforts made by all six Irish riders, they rode as fast as they could in very difficult conditions, and showed tremendous heart in finishing every race, hopefully they will look on this as a learning experience and come back stronger at home, and maybe here next year too.