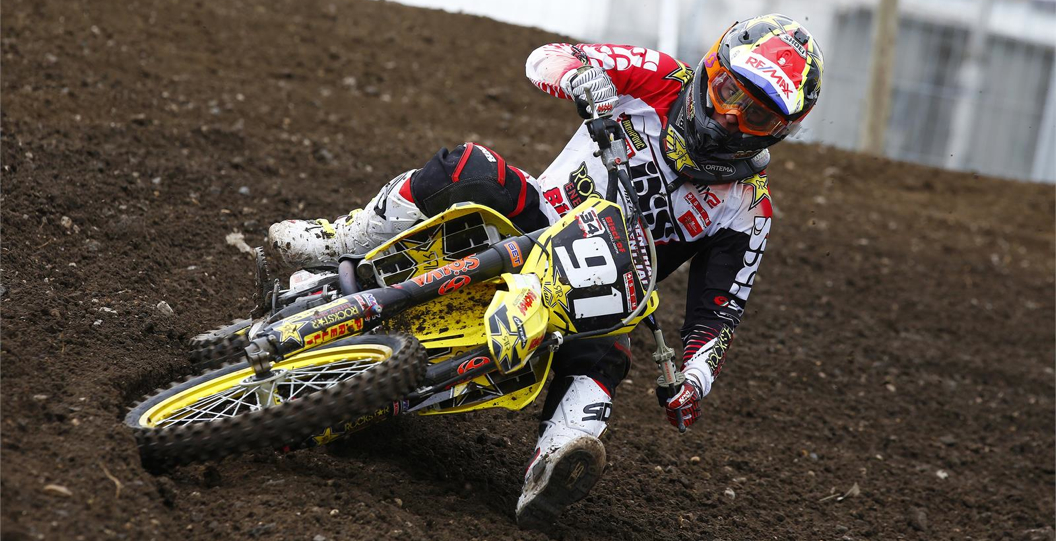 Thomas Covington has not had an easy time of it in his rookie season as a professional. After grabbing headlines at round one with a third in a moto, Thomas has struggled to recapture that form, as the gruelling MXGP schedule has started to take its toll on him. In Maggiora, it looked like he was finding his feet again, as he set a great time in the first practice session. However, he then chipped a bone in his foot. Although he attempted to return from that in Germany, it proved to be too painful. So, he will sit out Whitby this weekend (a race he was planning to do as a wildcard) in an attempt to be back on track in Sweden.

The GP of Germany was not exactly a happy affair for the CLS Kawasaki squad, as their star MX2 rider, Arnaud Tonus, went down at the beginning of the first practice session, and dislocated his shoulder. Reports suggest it was a minor dislocation, but either way, it isn’t good. Arnaud will try to race next weekend, in an attempt to defend second in the championship. But, I don’t know if that is wise. Shoulder injuries can be troublesome, and it may be worth having surgery so that he can begin his life in the USA with no health issues.

There are a lot of riders returning from injury this weekend, which is great for us! In the USA, Eli Tomac, Justin Brayton and Dean Wilson will all take to the track! Eli broke his collarbone in the week before the Las Vegas supercross finale – the recovery time was a little longer than most originally suspected. But, he is healthy now, and has actually been back on the bike for a while. Will he break into the group of four elite riders this weekend? I’m not sure if he will finish there, but I would not be surprised to see him battle with them for half of the race.

Justin Brayton has a lot to prove, as many teams are waiting to see how he performs outdoors before pursuing his signature. Although the common consensus is that Justin is not very good outdoors, he has won a 450 moto before (Steel City in 2009, moto two), so he has the potential to run up front! I think we will see him in the lower half of the top ten this week though, but expect him to mix it up with that second tier a lot in the coming weeks.

Dean Wilson hasn’t really been back on the bike for long at all, however, he isn’t letting that discourage him – he’ll be behind the gate at Muddy Creek. The popular Scotsman has admitted that he is not going to be in a position to challenge for the win, but he should be comfortably inside of the top ten still. If he can acquire two solid finishes, and lay a foundation for the coming rounds, I’m sure that he will be pleased. Of course, the fact that he is back on a bike already means that he will be one-hundred percent by the time that the Motocross des Nations rolls around, which is great news for the British fans!

In the UK, Elliott Banks Browne will get back on track following the shoulder injury that he sustained towards the end of April. EBB was originally slated to return at Canada Heights, but further issues meant that he had to take some more time off. He is ready to go now though, and hoping to show what he can do on the 450F! With no pressure on his shoulders, we expect him to make a splash, and have an interesting affect on the MX1 series standings!

Slowly, a lot of the riders are starting to finalise their plans for the 2015 season. There were a handful of teams that were hoping to secure Jeremy Seewer’s signature, but he finally decided to stick with the Rockstar Suzuki Europe squad, who have shown a lot of faith in him. With a lot of the established MX2 guys being forced to move up to the premier MXGP division, Jeremy should emerge as a podium contender – he has already shown some good speed this year.

In a shock move, Dean Ferris is returning to the MXGP series! After recovering from the wrist injury that he sustained during the supercross season, Dean is now ready to race. However, rather than contesting the Lucas Oil Pro Motocross series (like he was originally slated to), he will act as a replacement rider on the Red Bull IceOne Husqvarna squad. What does this mean for his future? Well, at this point, no one knows, but we reacted to the news here.

When it was announced that Drumclog would not be hosting a Maxxis British Championship round at the beginning of August, most were surprised. However, everyone was more shocked to find out that its replacement would be Cusses Gorse! Of course, no one knows how the event will turn out until it’s over, but we still offered up our two cents here.