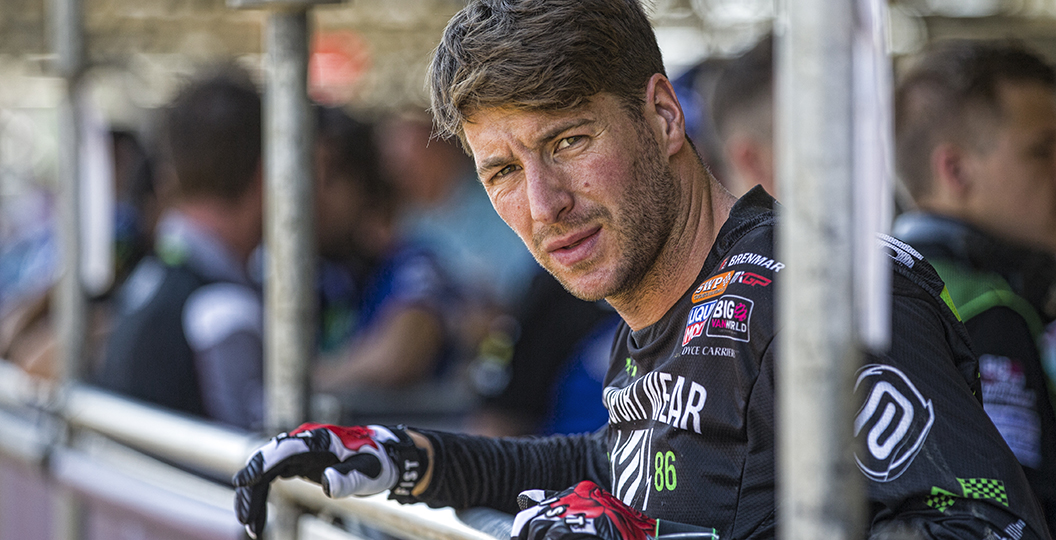 Tommy Searle had a busy weekend at the Grand Prix of Switzerland. There were some bright spots in his races, then some puzzling issues that he is going to attempt to figure out this week. It was also announced that he signed a deal with the BOS GP team for next year. A lot happened! So, bearing that in mind, it was obviously important for those of us at MX Vice to catch up with him on Sunday evening. This interview was originally posted as a podcast.

MX Vice: A pretty solid day for you as far as speed goes. There were little flashes of brilliance. The ending to the motos was not good, but just having those little nuggets is kind of something to cling onto.

Tommy Searle: Yeah, a little bit. It is hard to stay positive after the day I have had today. All weekend I have been okay. I showed speed, but it is not really good enough right now. I got okay starts. The second one, not so good, but the first one was okay. I switched back and managed to come out okay. The first half of the race I was in eighth and following [Gautier] Paulin. I felt good, but then at the minute I do not know. Ever since Czech I got sick and then I have not really got that fight that you need when it is time to pull the trigger with ten minutes to go.

I just do not have that in me right now for some reason, so I cannot point out what it is or anything. Tomorrow I am going to try and figure out where to go and hopefully it is just a simple fix; I can get some vitamins and just get myself back on the right track. I just struggled in that way, really. The second race was even worse than the first race. I was coming through. I think I came from eighteenth to twelfth, then after about fifteen minutes I just faded back.

It is not good enough at all. Really disappointed with my day, but I do not want to beat myself up too much about it because I think the track was difficult this weekend. Everyone did slow up, but I slowed up way earlier than everyone else and it is not really acceptable.

After talking to Steve [Dixon] on Friday, he said that you got back on training pretty quick after Indonesia and that led to this illness. This is all connected to that happening a month and a half ago then?

I do not know, really. I felt really good in Indonesia. They were sort of my best races. I felt strong at the end of them, setting my best laps on the last laps of both motos. I was excited. I had a good weekend and then it was Lommel coming up, so I tried to get out there and ride. I think I did a little bit too much that it has just set me back a lot by trying to get out there on my own and do that, then driving to Czech and then I got sick. I think I am just still feeling the effects from that really. Just difficult.

With so many races, I think everyone struggles a little bit and has ups and downs throughout the season. I have just had a little bit of a dip the past couple of weeks from Czech, the last three GPs. This one I was looking forward to because it should be a good weekend for me and it has not been. I just need to put it right, really. Hopefully I can find out if there is anything wrong. Maybe it is just like, “Yeah, you just had an off-weekend.” Hopefully that is the case and I just knuckle down and get some good results the following weeks.

If you do need some rest or something, then this really is the worst time to figure it out. Obviously two more back to back GPs… Roll on the weekend off after Turkey I guess.

It is definitely difficult with how many races we have, then we have the British Championship to travel to, so I think we have had a lot of hot races as well recently that has not helped. Like I said, it is the same for everyone out there. I just struggled this weekend. I do not know why so much. There were some good points with it. Yesterday it was okay with the temp and the first twenty-five minutes of the first race were good. It is not all bad, but I am not happy at all.

We are talking about this a bit earlier than anyone expected, but it was announced today that you have signed for BOS next year. Just talk about what went into that decision, how happy you are with the new deal and all of that.

Yeah, I am really, really happy with that. I have had a couple of meetings with them and my old team boss JJ, Jean-Jacques Lusietti, he is now the manager of the team. I spoke with Olivier, who is the owner of BOS, this morning. I think the team is going to make a big impact on everything next year with the technology and their suspension, but there is also a lot more to it than just their suspension. Olivier is really passionate about development and the technical side of things, and that is something that I have lacked for the past few years.

Really, I think it is a team where we can improve the bike. They are going to put a really good strategy together. I think it is just what I need to progress again and move up towards the front. I think I have been lacking a little bit this season. We have done the best with what we have in the budget. I love the whole team here with Steve Dixon and everyone, but he is going to focus more on MX2 next year, which I know is his passion. It always has been.

It is good for him that he can solely focus on that. I am lucky to have the opportunity to go to BOS and with Kawasaki. I rode their bike last week, the new 2019 bike, and it really is a step up. Already from a base, we have such a better start going into next season. To be with Kawasaki again; I am really, really happy about it, especially with that new bike and how good that is already.

Hearing that JJ was going to be involved with the team, was that kind of the thing that clinched it for you or were you already going there before?

JJ messaged me a few weeks ago and says, “Before you go and sign anything, I may have something.” He loves motocross. He loves being around it. Obviously, his team stopped either this year or last year, I think he has been eager to get back. The boss over there, Olivier, he obviously has a massive business. I think he did not want to be hassled with the team. He’s running a whole company, so he wanted to employ JJ to manage the team for him. I think it seems like a really good opportunity for everyone. I am really happy to be involved in it.

The British fans have already been on me to find out if you are doing the British Championship next year. I guess not, being a French team, unless you have got some kind of separate deal in Britain?