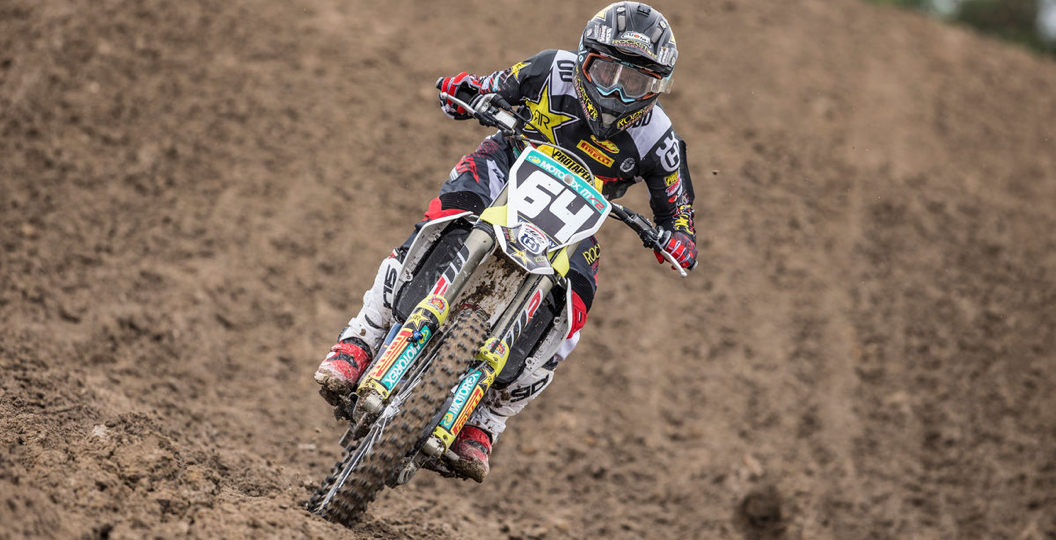 Thomas Covington has ended second overall at the last three FIM Motocross World Championship rounds, but has deserved more than that. Poor starts have hindered him at points, mainly in the second motos, and it seems that figuring that out is the secret to standing atop the box. Covington dissects that in this exclusive MX Vice interview from the Grand Prix of Indonesia.

MX Vice: Same story as the last few weeks, really. You were really fast and then won the first moto, but did not get the overall. It was a solid weekend, but obviously you want that top step.

Thomas Covington: Yeah, for sure. When you go out and win the first moto it puts you in such a good position, also just mentally you know you can win. I just have not been getting the starts that I need in the second race. I do not know if it was mental. I just keep screwing up the starts in the second race and making it really hard for myself. I think it was still possible to pull off the overall win today, even after the bad start. I just took too long to get around [Davy] Pootjes. Then by the end I was too tired to go run down Ben [Watson] and Jorge [Prado].

They were riding really well at the end and I just did not have the energy in me to run them down. Considering all things, I am pretty happy with another podium this weekend. Friday night I did not get any sleep at all. I was going back and forth from bed to the bathroom and was feeling pretty rough… Just hoping that I could get a decent result. Saturday night I was able to recover pretty well. I actually felt decent today out there, better than I expected to feel for sure.

I guess after that anyway, even though you felt decent today, winning the first moto in the way that you did, which was dominant, you could not have expected that?

Not at all. It just goes to show how big the start is. When you pull a holeshot like that, and especially with the track being so technical, the line choice was so important. When you get out front you can kind of see the whole track and use all of the best lines. That just made all the difference in the world. If I could have pulled a holeshot again the second race I think I could have won again. Starting back in… I guess there are only fifteen guys out here, but I was thirteenth or something, which is pretty far back. It just made it difficult for me out there.

There were a lot of different lines, but usually in a lot of the corners it was only one good line. If you went out of that then you were kind of taking a risk and risking going into a deep hole somewhere. Even though it is not as deep as it was last year, it is still one line that could be really good at the beginning of the race and after a few laps it just gets too deep and you have to change lines again. For sure it was challenging. Everybody was pretty close in speed actually, so it was hard to make a huge difference out there and make passes.

Going back to the poor starts you have been getting in the second races, do you think you are putting a lot of emphasis on that? Obviously you know that it is going to be important to win the overall. So have you sat there telling yourself to get a good start and then, because you are putting so much pressure on yourself, it is not happening?

Yeah, for sure. There is nothing else it could be, really. I am one of the lightest guys on the gate and I think I have got the fastest bike out there. There is no reason why I should not get good starts in both races. It is just maybe me and myself putting a little bit too much pressure on that start in the second race, because I have screwed it up so many times already. So just try to relax a bit more next weekend and get it done in the second race as well.

This was like our first proper Indonesian GP. Dry track, full schedule and everything. What did you make of it all?

It was actually not bad. Other than me getting sick, it has been a good event. I think there are quite a few fans out here. The hotel, and everybody there, take care of us pretty well. It is a good event. I think next weekend is supposed to be even better with the track and stuff like that. I am going to miss doing stuff like this next year. We are flying out tomorrow morning and going to go spend a few days in Bali, just because there is nothing else to do. You might as well. I am sitting here thinking, “Why am I going to supercross again next year?” Sitting there in Bali, but that is how it is.