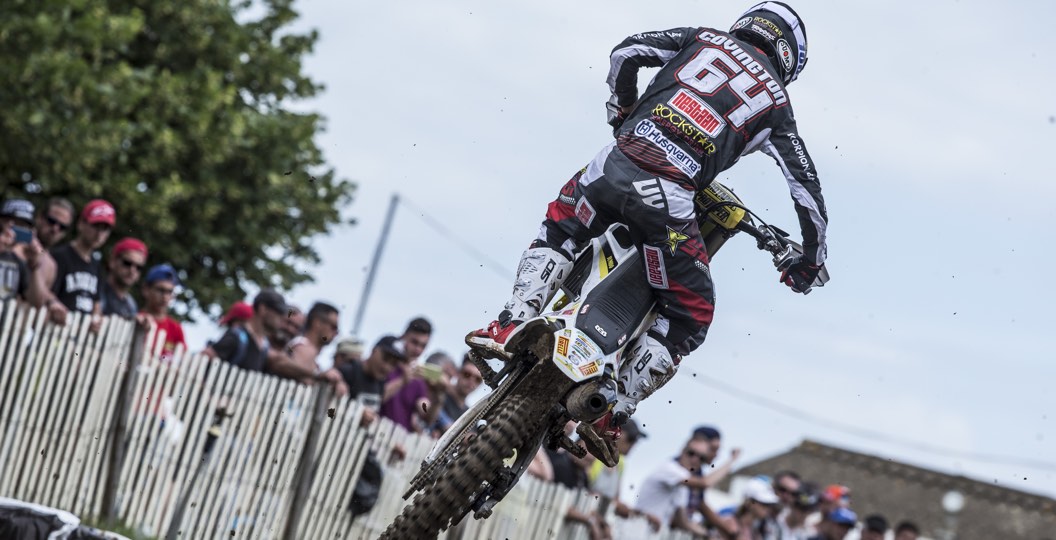 It was one of the worst-kept secrets in the Grand Prix paddock, but Thomas Covington has now confirmed that he will be returning to the United States with Rockstar Energy Husqvarna Factory Racing next year. Covington discussed the move, as well as his return to the podium at the Grand Prix of France, in this exclusive MX Vice interview.

MX Vice: This weekend kind of completes the comeback. Before the injured knee, you were second in Trentino and won a moto. You have come full circle now, as you are back up there and winning races.

Thomas Covington: Yeah. I felt like just as I was getting back riding like myself I re-injured my knee there in Portugal, so that was a bit of a bummer. This weekend I felt good. I was not thinking about my knee at all. Especially with track conditions like we had here, it is actually a nightmare for knees with all the deep ruts and stuff. I was really happy I was able to find the flow that I did. Just starting out on Saturday I finally got a good start. That is what I have been struggling with all season actually, the starts.

We made a few adjustments to my set-up for the start. It seems to be working. Hopefully I will be up there every start now. That is just the biggest thing right now is the starts. If you are not up there at the beginning, you pretty much have no chance at the win. It felt good to get the win on Saturday, especially just kind of straight up with the KTM boys, and then first moto today I pulled the holeshot and pretty much controlled the race from the beginning. I do not remember ever leading that many laps actually. The race felt like it lasted forever, but it was really good. I had my teammate right behind me.

The second one, I just did not get the greatest start actually. The first few corners I made some really good passes. I was up in the top ten already and then, just in the back, I do not know if somebody went down on the inside of one of those corners on top of the hill, but I just got stuck behind a few guys sitting in a rut and lost a ton of time. I had to start from the back again. It was good. I was able to get back up to the front, but just a little bit too late. I was pumped to get the podium, especially with the whole team up there. I am still kind of bummed I let the win slip away, because I feel like I definitely had the speed to win it this weekend.

You say you made some changes to the bike for the starts. Can you go into more detail on that or is it all kind of a big secret?

No, not really. I guess one thing I can tell you is I just put my start device lower. For some reason I had the highest starting device out of the whole team, I think the KTM boys as well, and I am one of the smallest guys, so it did not really make sense. We just went two centimetres lower on the start device and that just gave me a lot more confidence to really hammer it right when the gate drops.

I think you said last week that your starts were kind of bad because of adjusting to the new bike. Moving your start device lower, is that something that comes with the new bike, or was it the other change that links to that?

I do not know if it is the new bike, but definitely not the new bike. The new bike has got a ton of power. I think I just had them so dialled on last year’s bike that it has taken me a bit to get adjusted to this one. Last year I could just rev the crap out of it behind the gate and control it with the clutch, whereas this year if I do that I cannot control it. I just get out of control. With the grill being so grippy, I just lose balance and wheelie too much. It is just trying to find that balance with the right number of RPMs.

Let’s get to the big news then. I think I found out about this in Argentina, so it has been a long time coming. You are going back to America next year with Husky, so kind of staying in the family. What went into that decision and when did you actually sign?

I actually signed at Motocross of Nations last year at Matterley Basin on Friday, I think, before the event. I was all set to go. Then this year started and I am like, “I really do not want to give up my last year in MX2, even though I would like to go home.” I was trying to figure out a deal to maybe stay another year, but a couple of weeks ago I was just talking with both teams and Robert Jonas at Husky. We decided the best move was, if I wanted to go back eventually anyway, that I needed to do it after this season. Otherwise I might miss my opportunity. I wanted to stay MX2, but now that I have made the decision to go home I am really excited about it.

I guess it comes down to the fact that you are going to be taking Zach Osborne’s space. Had you left here another year, then that space might not have been there. Other teams might not have been interested and then you would have been stuck as a privateer or on a 450F.

Yeah, exactly. For Bobby Hewitt, it is not easy to hire a really good rider just for a one-year deal, if I am going back next year. Same for this team. They wanted to get somebody that they could have a relationship with for a few years. It just did not work out on both sides for me to stay another year, which is kind of a bummer. I am stoked to go back and live at home. It is going to be cool. I have been in Europe for a long time and it has been amazing. All the people here have treated me like family, but there is nothing like the USA.

Say that it had come down to you then and a couple of weeks ago they were just like, “Look, do whatever you want.” Would you have decided to stay here or, given the option, would you have maybe decided to just pull the plug and get out of it?

I guess if it had all worked out exactly how I wanted I would stay another year, but it did not really work out that way. There was a point where I was like, “Maybe I would like to stay and do MXGP here as well,” but that was not really an option. They are pretty full in the 450 class here and with the age rule it does not really leave many spots open in the 450 class, which is a bummer. I think it is the best thing for my career. I think now going back and racing supercross and all that, I am a lot more prepared than I was when I was sixteen or seventeen and going to make my debut then.

Are you going to have a one-year deal with Husky in the USA for next year then? Is it going to be a case of getting there and proving yourself or is it a multi-year deal that you can kind of build into?

I guess that is a big part of it as well then, because having that security when you are making a big move, even though it is going home, it is still a big change. That is nice.

For sure. Especially in supercross I think the first year is going to be a bit of a learning year for me. Outdoors, I feel like I will be right there right from the beginning. Really looking forward to that. It is sort of a new challenge and a new motivation starting with supercross. I rode quite a bit of supercross when I was younger growing up racing Monster Cup in the amateur class, so it is not like I have never been on a supercross track before. Just looking forward to getting back and sort of getting into a new routine.

I have asked you this a few times this year. This is kind of what I was getting at without actually saying it. The championship is gone now. What is your goal here? You are now going to lose out on an MX2 title forever. What is it going to make you happy? Wins? Is two wins going to be enough? Do you want to hit a number? Have you set a goal in place that you would like to leave with?

I have not set a goal, like an exact number. It is really just winning as many motos as possible, one moto at a time pretty much like this weekend. Like I said in my interview after the race, I am just really motivated for the second half. I will probably never be back here racing at St. Jean. I want to make the most of it while I am here, make the best memories possible and leave a mark with all these European fans.

That is kind of what I was thinking as well at Matterley. I know you like that track. Obviously, it is kind of American and it is where you made your debut. You have got a lot of memories there. Coming to each of these tracks for maybe the last time, is there a little bit of emotion attached to it?

Yeah, there is, definitely. Especially this weekend when I won the qualifying race, won the first moto and then I was like, “I have to win the second moto. I have to do this.” That is why everyone was so stoked after the race and pumped the whole team was on the podium. I was just a bit bummed, because I let that slip away.