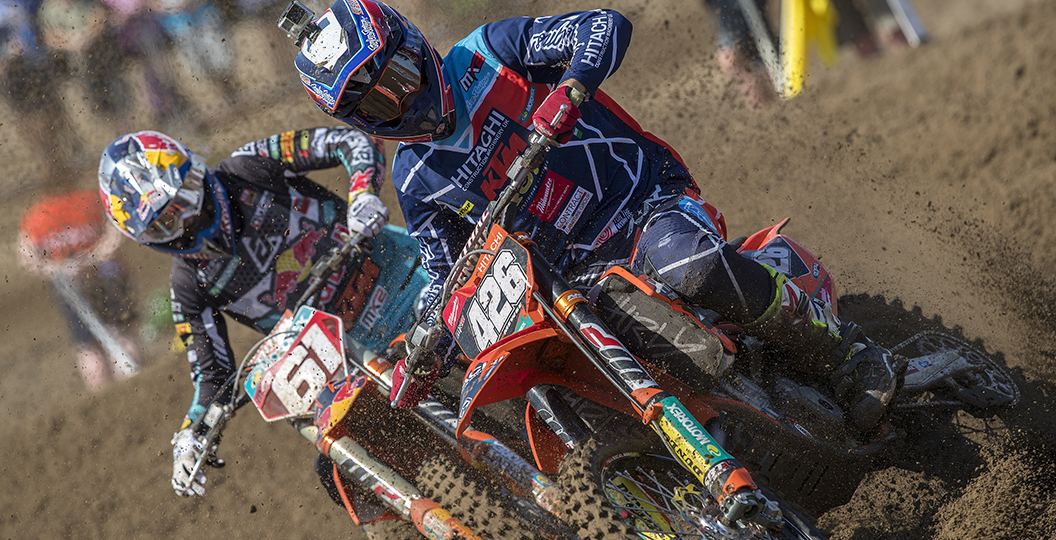 Conrad Mewse has left most perplexed this season. There have been great highs, such as the opening moto at RedSand in March, but then disappointing points as well. What has caused such an inconsistent season? Mewse finally speaks openly about all of that in this exclusive MX Vice interview from the Grand Prix of Belgium, an event that was very kind to him. After showing great speed in both motos, as well as the qualifying heat on Saturday, he ended the weekend in seventh overall.

MX Vice: Solid weekend and a solid way to get back into it. You definitely showed you have got the speed to podium, so all around it was good.

Conrad Mewse: Yeah, definitely. It has been a struggle for me the last couple of months. I know exactly what I have done wrong. I haven’t been devoting my life to this sport and that is exactly where I have been going wrong. Obviously the last three or four weeks aren’t my fault. I had a crash in the week. We were actually starting to really get there. We had a crash in the week and I dented my femur. It was quite lucky it did not break actually, but I couldn’t walk or anything for two weeks.

I was pretty much just sat on the couch at home and drowning in my sorrows. It is nice to be back at the racing this weekend and obviously two top-ten results is what I came here to do. I am happy we came away with that. But, like you said, for sure I showed the speed that I can win races this weekend. I think everyone saw that. It is just we are lacking a bit of race time, but hopefully we can really progress now and put some hard work in in the week and we’ll get back up to speed.

Before we move onto this weekend, I think you have just kind of uncovered why there have been highs and lows. It is all down to you have not been devoting yourself to training? Is that literally it? Matterley Basin, when it was low, it all comes down to that?

Yeah. It was not the training part. I was doing all my training and things like that, but I just wasn’t giving… I will put my hands up and I will openly admit I was not giving one hundred percent to the sport. That’s exactly where I was going wrong. I realised that and for sure I will not be falling in that trap again. People were telling me, like my father and the team and things like that, they were telling me obviously, but I was just a normal eighteen, nineteen-year-old kid and thought I knew best. But I know exactly where I went wrong. That’s been the problem the last few GP rounds. It is nice to realise that and actually make the change. Now I am going to get my head down one hundred percent and I am going to finish this second half of the season good.

Seeing as you finally sussed that out, do you kind of feel like a weight has been lifted? Are you stood here now knowing exactly what you need to do? There are no questions and everything is kind of in line now. It is all on you.

Yeah, definitely. Before this weekend, I would have gone out there and I would have been trying to pace myself for the races. This weekend I thought to myself, “Do you know what? I am not going to be able to last the whole thirty. I am just going to go as fast as I can for as long as I can.” I had the speed to run with the front guys for the first fifteen or twenty minutes, but I know what we need to work on. Speed is not something you can work on, so that’s already there. But fitness for sure is. I have not raced for three or four weeks, so it was going to be difficult for me. I knew that coming in. But now, like I said, we are going to really get our head down and we are not going to mess about. My life is this sport now.

Even though you did not break or dislocate anything, just missing that little bit of time… You lose so much race pace and fitness. I guess you noticed it when these motos got into the second half?

Yeah, definitely. It was not even a case of just missing the races and carrying on with my training in the week. I literally could not do anything. I felt completely lost. I could not do anything for three or four weeks and that’s not even a normal break. It was a bit of a tough time for me, but now we re back and hopefully we can continue on to finish the season strong.

It must have been a big crash then. I do not know much about a femur, but to dent it you must have gone down hard.

Yeah, definitely. I came over the jump and there was literally just two bikes left on the track and I thought to myself, “Sh*t.” I had nowhere to go. I literally landed just before the bike. I hit the bike and it was my bike that came over and slammed down on my leg. Straightway the top of my thigh went up like almost half of a football, so I was just thinking all bad thoughts. But luckily I did not break anything. Obviously God was on my side then. It is nice to be back out racing here this weekend at Lommel.

Obviously, you are going to want to finish the season strong and kind of prove that you can do it. We know you have got the speed in the sand, so Assen… I guess that’s a big goal for you? You have got a month to kind of build up to it. There is no reason why you cannot stand on the box there.

No, definitely. Obviously, Assen is a good track for me. I had a good one there last year. I have got a few weeks now before Assen to really get my head down and I will one hundred percent be finishing off this season strong. Hopefully I can get on the box. If not, then it will not be long next year until I do.

Finally, I guess we have got to ask. Next year, are you locked into this team? Do you know anything at all?

It is all pretty open at the minute. My contract has already ended this year with this team, but obviously I have the option to sign again and I have some different options as well. We are going to see how the rest of the season plans out and make our decision on that. For sure I am not going to be making a change anytime soon. This team has been fantastic to me and I have gelled nice with the bike. It is a great group of people. All they want to do is help. They are here for the bad times and the good times. For sure, it is not going to be an easy move if I do move, but we will see. Hopefully I can have a solid rest of the season and then if we re-sign with this team it would fantastic.