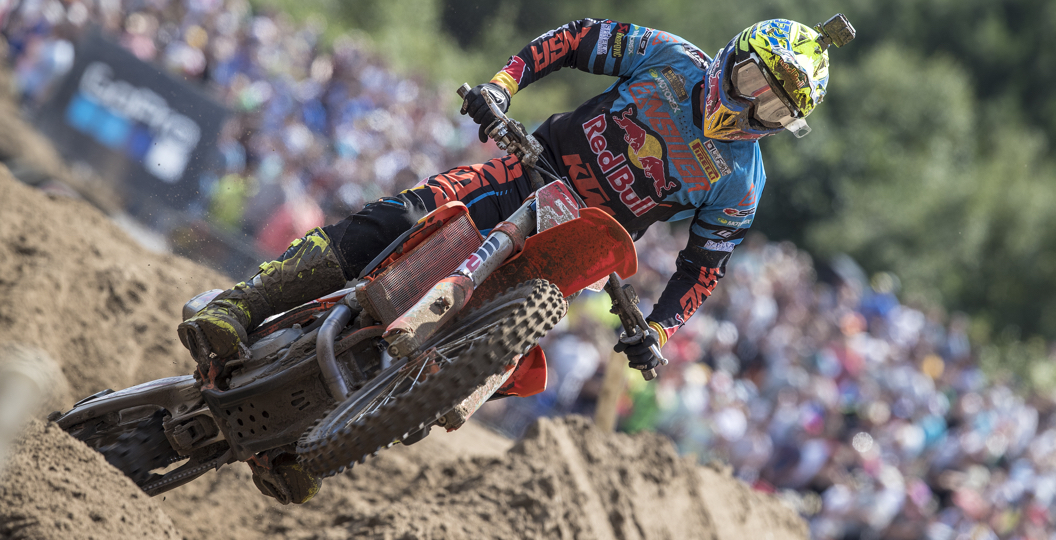 Antonio Cairoli put on quite a show at the MXGP of Belgium, held at Lommel, as he duked it out with Jeffrey Herlings in the bottomless sand. The battle garnered attention across the globe, hence why it was important to get Cairoli’s side of the story and find out more about what occurred in an exclusive interview.

MX Vice: Great riding, obviously, that was your normal speed in the sand. You were on it. You did not win, and we could see that you really wanted that, so I guess you’re not exactly happy.

Antonio Cairoli: I didn’t really want it. If I wanted it, I [would have] kept pushing until the last lap. I decided that it was getting very risky. He wanted it 110% and I wanted it 90%. He was getting quite close and we passed each other a lot of times. If you are not completely fit and focused, easily you can crash hard on this kind of track. I decided to give up after twenty-five minutes. I wasn’t feeling so strong to keep fighting him for thirty minutes, but the speed was there. I had to look for the championship. I don’t want really crash and do something stupid.

Maybe if I don’t have the points lead I would have given it 110% also and maybe taken some risks more. But, for sure, he’s born in the sand. He is one of the fastest guys in the sand. This year I prefer to give more training on the hard-pack and you see the results too, because I won at Loket. I won at a lot of hard-pack races also. Maybe I rode Lommel three or four times this year. I should ride more if I want to win this race. He is every day on the sand. Hat’s off to him – he was riding very good. Looking forward for Switzerland next week.

We’ll start with the big question then. Say the points were different, it was close and you were giving it 100% today. No doubt in your mind that you could have won and beaten him?

No, I don’t know if I could win but for sure I could keep it open until the last lap and the last minutes. Now I gave up after twenty or twenty-five minutes. But, anyway, I had the speed. That’s clear in all the lap times. Compared to the rest of the guys there was a huge difference. Like I said, it wasn’t the case to give 110% today. Like I said, he’s one of the fastest guys over here at the moment. He has nothing to lose. He just has to win, with nothing to lose.

The first aggressive move that we saw was you over the back. You ran him wide and he dropped off track a little bit. Did he do something before that made you get aggressive or did you decide to start it?

At that moment, he had a good rhythm, so tactically it was good to break a little bit this rhythm. To maybe see if he could keep it on again or not. This is experience; nothing crazy, nothing bad and nothing dangerous. We know each other very well. He didn’t do nothing bad to me. I didn’t either to him. It was clean racing and we enjoyed. The people enjoyed. We are really happy about this and looking forward to Switzerland, like I said. It is a track that I really liked last year. I won there and I’m looking forward. You have good races but, from now on, it’s difficult to give for the GP win. There are a lot of people who are motivated. Some people need the contract for next year. Somebody needs to show up. It is kind of a dangerous moment; you need to watch out.

Obviously, you do not want to take risks. You did that quad a lot though, so did you find that pretty easy?

It was easier to do the quad than triple, because it was more safe in one way. Everybody was doing the triple so there was a lot of ruts. On the quad, it was fun. It was getting a little more flow for the rest of the waves.

Although you were doing the quad, [Jeffrey] Herlings was consistently making time up on you in sector one. Do you have any idea why that was? Did you spot something that he was doing?

No, even first moto he was making one second to me on that first sector. I don’t know. Like I said, there were several sharp bumps in that place and he was giving 110%. I was very careful on that place. Maybe I need to attack more the track. But, like I said, this was not the case to keep 110% at this race for me.

Is that something where you’ll go and watch tape to try to figure out what he’s doing or are you not really that bothered?

I don’t care. If he is a contender for the title, I will watch him. Not at the moment.

Finally, it was a different track this year. What did you think of it? It seemed harder to pass than in the past?

The track is very nice. I like it a lot. They did a very good job, as it was getting boring. The track for so many years was the same shape and now finally they change it. So, even for training will be nicer.