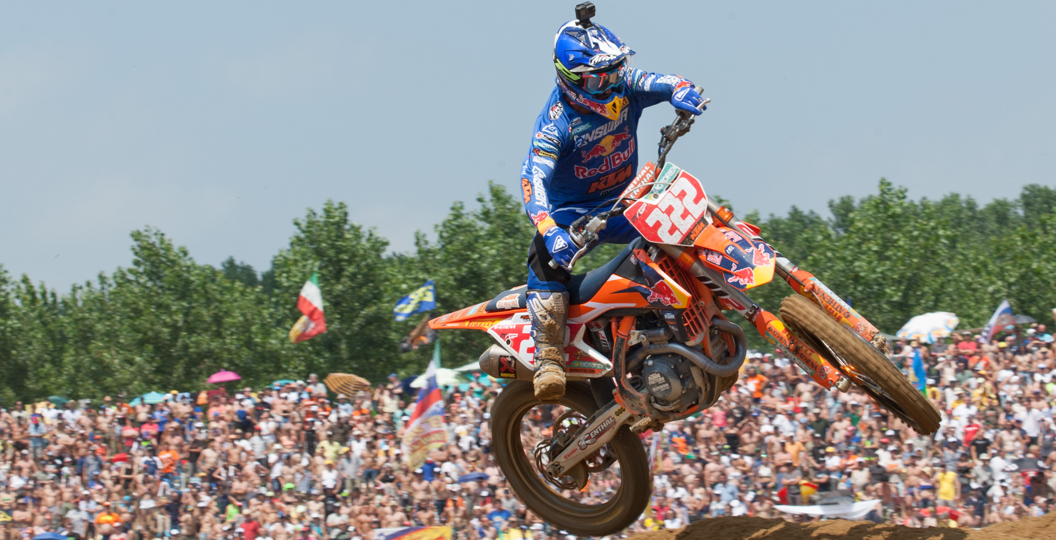 Antonio Cairoli has not had the most spectacular season, aside from high points in Qatar and Italy, but he has featured at the head of the field each week and managed to build a comfortable advantage in the series standings. ‘222’ reminded onlookers why he holds the red plate at the MXGP of Lombardia, as he defeated Jeffrey Herlings straight up in the sand.

MX Vice: I guess that as far as home GPs go this is pretty perfect. You battled hard, won and extended your points lead.

Antonio Cairoli: Yes. It is a very tough GP, because it is in Italy first of all and [there are] a lot of expectations for the fans all the week. There are a lot of media events and a lot of sponsors coming to the race. Difficult to focus on the race, but we managed to have a good weekend. It was almost a perfect weekend, so we are really happy about that. We extended the points lead, so now we start looking a little bit to the championship. We will see. It’s very long to go still, but we are on the good way.

You say you are now going to start looking to the championship. What does that mean exactly? Does that mean you start to settle down and not engage in battles like you did with Herlings today?

For sure, I am going to be a little bit careful in some places. They have nothing to lose and I have a lot to lose from now on. I know I can battle for the lead, for the win, but sometimes you need to settle down and think about the bigger picture (the championship). I focused on my opponents, who are second and third in the championship, so we keep an eye on them. The rest, if they have something they can win races. From now on if we have the possibility for sure we’re going to win, like we did today, otherwise the podium is always a good idea.

Every season is different. Today was a very good race for me and for the championship. On this soil I expect a little bit more from Paulin – he is also a really good sand rider and he didn’t have the best race. We know that Desalle is struggling a little bit on this kind of soil, but he won the last two GPs so he is still a good contender for the title.

That first moto battle with Herlings was pretty intense. He was all over you. There was one point where you block passed him and with around a quarter of a race to go you just dropped your lap times and left him. Did you always know you had that speed in the tank?

Yeah. My conditioning is very good at the moment. We work a lot with the bike and I feel really comfortable with riding on this kind of track [that is] very technical and very bumpy. Also today was very hot, the weather, but yesterday more than today. I know that Jeffrey is one of the best sand riders that there is, so we tried to stay with him and with his speed. I could push a little bit more than him on some parts of the race. He could push a little bit more in some other parts, so it was a great battle.

In the second moto, when he passed you, I guess it was the same thing. You didn’t really panic because you knew towards the end of the race you would be stronger and had the speed in the tank again?

Yeah. I have some experience. I know how to handle this kind of situation. I really enjoyed the race. For the public, it was also very good. It is strange to battle with your teammate. It could be an easier race if he was not there, but this is motocross. It is very nice that he was there because for the public it was amazing and also for myself it was really good to prove myself that I can ride also very fast if I want for the MXGP win. Sometimes it is not necessary, like I said before, not taking risks when it’s not necessary.

I guess it is important to make a statement as well? Everyone has been talking about Herlings lately, because he has been coming on and winning races. By battling with him, dropping him and winning convincingly you’ve kind of reminded everyone why you’re leading the championship.

For sure. Jeffrey is a big talent. He is a very fast rider. The MXGP class is a different class. It is not the MX2 class, where he was dominating. MXGP is a different class. You have to fight harder and the bikes are stronger. If you don’t respect the bike it can throw you away. Danger is always around the corner. A lot of things you need to see before you just open the throttle. It’s kind of interesting to see, but for sure he will grow. He’s just in his first year in the MXGP class, so he will be better and better. He’s already on a top level, because he is on his best age. Today also was a track for him that was very good, because in the sand normally everybody knows he’s very good. It was good that we could beat him on this kind of soil.

You have done a ton of Italian GPs over the years. Where do you rank this one with the track, atmosphere and facilities?

I think this is one of the best, for sure, because the parking – everything is nice. The fans can see from the track. They can see most of the track, because it is very high. It is like a stadium. It was nice, but also I like to have a new venue every time because it makes new people also come to watch the race. This is good for the fans.

It’s kind of similar to Mantova but better, right?

It is kind of similar to Mantova, yeah, but it is sandier and a tougher track. It’s a little bit similar to what we usually see normally only in Belgium or in Holland. I like it. I like sand, everybody knows. When the track gets very rough, I can do my best. It is a different track than Arco, for sure, which was another good Italian GP for me, but competitive for acceleration.