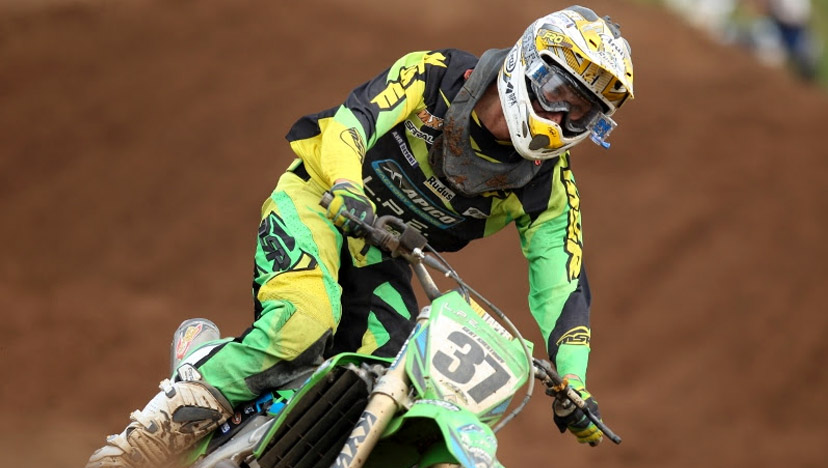 Easter Weekend saw the Apico LPE Kawasaki Racing team head to their home round of the MX Nationals series at FatCat. After finishing third overall at the opening round the team were looking to improve on that position over the weekend.

The weekend started on a positive note in the qualifying session as Gert Krestinov quickly produced a number of fast laps to take pole position and first gate pick for the weekend.

With pole position, Gert was able to have the pick of the gates, after a few technical problems with the start the race got underway with Gert start inside the top 3 on the first lap. As the opening laps went on Gert pushed forward and took the lead just before the halfway point. Once in the lead Krestinov set a couple of quick laps and produce a small gap over the chasing pack. With just a few laps remaining Krestinov got held up by a back marker which allowed Watson to pass him around the outside. Unfortunately with time ticking by Krestinov wasn’t able to pass Watson and would finish in second.

Sunday morning saw Krestinov take third fastest in morning warm up and looking comfortable on the track. With that confidence Krestinov made a strong start in the second race and quickly worked his way into the lead and started to pull away at the front. Unfortunately drama happened at the mid race point when the mousse and tyre to come off the rim, luckily Krestinov was able to get to the work area where the team fitted a spare wheel and sent him back out into the race to recover as many points as possible. With the points system at the MX Nationals Krestinov knew that he had to pass as many riders as possible, as each pass increased his points haul and by the end of the race he had recovered to 28th place and salvaged 53 points for the championship.

After the disappointment of the second race Krestinov was forced on trying to take the race win. When gate dropped Krestinov rounded the opening corners just outside the top 5 and put his head down and charged hard to get into the top 3 by the end of the first lap. As the race progressed Krestinov moved his way into second and set about challenging Banks-Browne for the win when Banks-Browne crashed heavily, once in the lead Krestinov rode a steadily pace to take the race win. At the end of the weekend Krestinov finished in sixth overall and moved up to second place in the championship.

In the MXY2 class, Youth rider Ben James suffered with the added pressure of his home race and struggled with arm pump and small crashes all weekend. In the qualifying session Ben finished 19th fastest, before taking 22nd and 18th in the two races on Saturday after suffering with crashes in both races. On the Sunday Ben improved slightly to finish in 17th place in both races for 20th overall.

Gert Krestinov: this weekend has been good, I was sure what to except as I don’t get to practice here as much as in previous years. Qualifying went well as I took pole in my group and got first gate pick for the weekend. In the first race I start well and got into the lead and then with three laps to go I missed my pit board and didn’t realise how close Watson was. I then got held up by a lapper and Watson got by and I didn’t have the time to pass him back. The second race of the weekend I was leading again when something happened with the rear wheel and the mousse and tyre off the rim. I managed to get to the pits and change the wheel and re-join the race to recover some points.  Then in the last race I got the worst start of the three but rode a good first lap. I rode a steady pace all race as I didn’t want to run out of steam at the end. Once I was behind Elliott I was looking to make a move when he crashed heavily with a back marker and I hope he is ok. I’m happy with the win and to move up to second in the championship and I’m looking forward to the next round.

Ben James: During the qualifying session I didn’t really get going and finished 19th fastest. Then I the first race I got a half decent start and worked up to 11th until I crashed. Then I the second I didn’t get a very good start and suffered with fitness. On the Sunday I started ok in the first one and got to 13th before crashing and then in the last race I just struggled badly. I’ve now got some thinking and do and regroup before my next event.

Steve James: the weekend start off well with Gert going pole in his group and getting the first gate pick all weekend. The first race he gated around 5th and came through and took the lead, when Nathan Watson was on good form and caught Gert and with 3 laps to go Gert got held up by a back marker and this allowed Watson to get by. Gert lost his rhythm and had to settle for second which was still good. On Sunday morning Gert was 3rd fastest in the warm up so we were feeling good about the day. In the first race he came from 3rd or 4th and took the lead and had a good gap when we had a problem with the rear tyre and the mousse and tyre off the rim. Luckily Gert got back to the work area and we were able to fit a new wheel and he re-joined the race a lap down and recovered to 28th and scored 53 points. The last race we knew we needed a good result and he came from his worst start of the weekend to pass for the lead, unfortunately Elliott crashed and we hope he is ok. Gert took the win by nearly 15 seconds which was good. His results were good enough for 6th overall and moved him up to second in the championship. In the MXY2 it wasn’t the best weekend as Ben suffered with his nerves of it being a local race and he got 20th overall. Overall it has been a good weekend and we look forward to the next round.